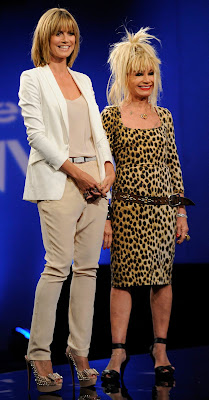 Some amazing things happened during this episode. First, it was an unconventional materials that sent contestants to a party store! Tim warned the designers not to use tablecloths or other materials too close to fabric. He encouraged them to be innovative with their choices. Many still gravitated toward napkins and ribbon but others ventured out to find plastic plates, shiny fringe, beads, pinatas, balloons and so much more.

Which brings us to the second amazing thing. Tim lets his inner middle schooler out to giggle about the "wooly balls" Kristin was using in her outfit. When she asked him if she should use regular balls or the wooly balls, he said, "I prefer the wooly balls," and promptly turned bright red. Tim rarely drops his concerned father character. For anyone else this moment would have been awkward, but with Tim it was just plain funny.

A not so fun part of the episode was the revelation that Gretchen is really annoying. Sure, the editing made it worse, but she shouldn't give advice to everyone and tell people to keep their workstations neat and tidy. No one likes that. Also, it's best not to sound like a know-it-all after winning the first two challenges. Gretchen, stay quiet and be a talented designer so all of us at home can cheer you on.

The winner of this challenge received immunity. Also, Heidi announced that the losing model would be eliminated with the losing designer. Gretchen had a chance to switch up models, but didn't take it so we didn't get to see if Gretchen would be able to steal models and leave a designer to choose between the losing designer's models or if all of them would get to switch. It seems they are stuck with who they have for now.

Speaking of models, they brought the designers little gift bags during their fittings. But they were far from gifts. Instead, they were full of party store goodies that had to be used to create an accessory for each designers look.

Christopher's dress was quite simple, but the fact that it was made out of napkins and little sparkly pieces was rather creative. It looked like fabric and moved nicely. (The color looked much better on TV).

Michael Drummond had a futuristic Alice in Wonderland thing going on. The skirt looked a little clunky on the runway, but I liked his vision for this.

Ivy's dress was very pretty. It could have used some color and maybe a belt, but it moved nicely. Also, I love seeing wearable skirt lengths.

Michael Costello accomplished a crazy amount of work in a day's time. His dress had great movement. It was also bold and colorful. He captured the challenge quite well. I was surprised he didn't find himself in the top three. He must have been fourth.

Peach's design sensibility just doesn't resonate with me. It all looks too much like the junior's clothing sold when I was in high school. This skirt is cute, but it looks like gift bags and tissue paper. She didn't transform anything. It was nice, but nothing more.

The top of Mondo's two-tone pink dress reminded me of the cup dress Daniel Feld made on season 5. Mondo's had even more detail. The structured top with the super poofy skirt was fun. I also love that he used color, which was in short supply during a challenge that should have been brighter.

Kristin used color, embodied the fun spirit of the challenge and used several different materials. However, it looked cheap. I could see a dollar store Barbie doll knock-off wearing it. I thought she was in danger, but she made it to safety thanks to some worse designs.

April made glitter and party supplies very edgy. (A little too edgy since it was stabbing her model in the face during fittings). It looked very cool and not at all like it came from a party store.

Gretchen found herself in the top three again. I wasn't as crazy about this look, but I do give Gretchen credit for making separates. The idea of turning paper bags into a faux-leather jacket was also pretty brilliant. After the judges tore apart McKell for styling, I don't feel like these boots should have been allowed to accompany the rest of the look into the top three. It doesn't work. It's hard to see her accessory here, but she made a cuff out of black balloons and ribbon. It's also hard to see the chevron print she cut into the skirt's two-layered fringe. The judges imagined Kate Moss wearing this, which I can totally see.

Valerie made a chic dress out of black and white napkins. The judges praised it. They also praised her for taking her styling tips from last week and applying them here. Betsey Johnson thought it would be a great party dress since you'd already have napkins on hands if you spill anything. Valerie had a great attitude about coming so close to a win once again. She admitted the winning dress was more innovative and seemed happy enough to be in the top three. I'm liking her personality more and more. Her confessionals are quite cute and funny.

Andy nabbed the win. He braided and shaped a ton of ribbon to create a really unique dress. He nearly ran out of time but Peach and April helped him after they finished their dresses. I especially loved his accessory, which was a little glove made from black balloons. I'm thrilled to see Andy win since I've liked his work a lot so far, and he used a lot of fascinating techniques to make this. Michael Kors predicted Heidi and Rihanna would fight over wear it. Heidi called dibs since she saw it first. Betsey Johnson actually thought it was too beautiful, which Andy decided was a rather nice compliment.

A.J. should have had this challenge in the bag with his Heatherette-inspired dream to dress Paris Hitlon. Instead, he froze and ended up with a pinata that exploded (according to Michael Kors). This is the designer who auditioned with dresses that included Rubber Duckies, but he lost it all here somehow. Betsey Johnson saw some promise but would have liked to see it "a zillion times exploded." She's right. If you're going to do a beaded fringe crotch you have to really go for it. Hopefully he can pull himself together because he's made it to next week.

Sadly, Casanova has also made it to next week. He did OK last week, but this week was mess with too much going on including puzzling ruffled legs. He used table clothes even though Tim warned him not to. He also still needs a translator because he's clearly spacey enough without a language barrier making it worse. Michael Kors said, "She looks like a transvestite flamenco dancer at a funeral." I'm assuming Casanova got to stay so Michael Kors can keep saying things like that.

And Sarah went home because the judges always vote against boring and sad when they can have crazy and over the top instead. I'm sad to see Sarah go. I think she had potential. She stopped following her instincts and got off track with this dress, but the judges never questioned her taste or understanding of the challenge. In the end the judges said they had to choose between boring and safe or a parade float. They apparently plan to attend funeral parade for transvestite flamenco dancers this week.

What did you think of this challenge? How did Betsey do as a judge? Will PETA be after Casanova for his brutal murder of Plush Puppies and use of (very)faux-fur? Who were your favorites and least favorites? Who is out next week? Do we have any guess for Bryant Park yet? (I'm starting to think Andy, Gretchen and Valerie). Or is it too soon?

Catie said…
Oh, my gosh, this is such a great post! I caught the last few minutes of this episode, but had to run out the door!

I haven't seen enough of this season to get attached to anyone, but my personal favorites from past seasons are:

JIM Designs said…
Fantastic reporting! I love Andy and Gretchen's work. I was sad to see Sarah go. Peach is sweet, but she's making all older women look bad. Did you see the grandma sweater she was wearing?! I actually liked Casanova's dress :)
August 13, 2010 at 10:10 PM

Shelby said…
I think Betsey Johnson is a perfect guest judge for this show! She always has great styles for her line of clothes!
August 14, 2010 at 5:25 AM

Unknown said…
Your picks for top three are also mine. I can hardly wait till Casanova goes adios!
August 14, 2010 at 8:02 PM

Kaye said…
I so wish Casanova had gone home this week instead of Sarah. I actually yelled out "No!" when they said he was safe. I haven't really like anything of his and I thought Sarah had way more potential.

I agree about Gretchen starting to get annoying with all her comments. I have liked all her designs, though, but Valerie is my favorite so far.
August 14, 2010 at 9:53 PM

Robin said…
Wow, so many things about this episode.

- Yes, Gretchen is a total snot. I wish she'd stop because I love her clothes! I wanted her to lose badly this time, even though her outfit was easily my favorite. I would wear it in a heartbeat.

-Michael Costello is becoming my new favorite. I loved his dress (agreed, should have been top 3) and I love how snarky he is.

-I love Peach, but she has two looks. One is too old, and the other seems to be what old people think young people like. It's very Limited Too.

-Valerie is totally adorable and I love her designs. Was sad she didn't win today.

-Casanova stays, and Sarah leaves!?!? What on Earth!?!? He has a poor taste level (to use their words) he didn't listen to anyone about the materials they could use, he's been in the bottom before... he's utterly hopeless. Sarah is adorable and at least has taste and a direction. Big mistake by the judges here.
August 15, 2010 at 4:57 PM