By becca - July 16, 2008
Tonight, season five of Project Runway began on Bravo. Sixteen new designers were challenged to create a garment out of items from the grocery store on a $75 budget. Creativity was encouraged as always. This challenge is a repeat from season one. The winner, Austin Scarlett, created a dress made entirely from corn husks. The judges hoped the group of designers would top this.

Tim Gunn did not seem impressed as he came in to evaluate their work, but there were some real gems. There were also some pretty awful creations.

I don't think they got the loser right. It came down to Stella and Jerry. Stella bought cheap garbage bags instead of good ones so her shiny pants idea didn't work out. Instead, she just stitched together a dress from cheap garbage bags at the last minute. 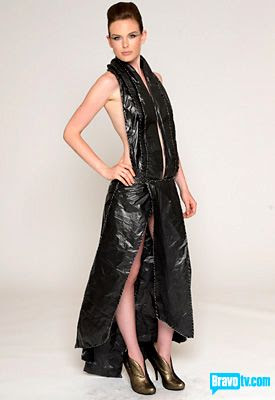 Jerry had this raincoat made from a shower curtain and a gauzy dress underneath. He did not execute it well, and it turned out kind of ax-murder-creepy. 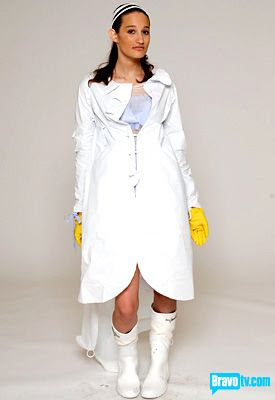 Both of the looks were unwearable. Of the two, Jerry's at had craftsmanship, but Stella's came off a little prettier and more normal. In the end Jerry went home. I did hate his outfit, but I thought he deserved to stay more than Stella. I could have made Stella's dress, which means almost anyone could have made it.

My two top favorites were Daniel and Kelli. Daniel made his dress out of blue plastic cups. He ironed them to mold them on the form. It looked really cool and was very innovative. 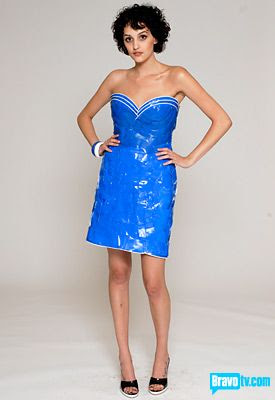 Kelli used dye and bleach to create a pattern on vacuum bags, created the pattern on the middle of the dress with gold push pins and burned coffee filters to create the top which was fastened in the back with the spiral binding from a notebook. 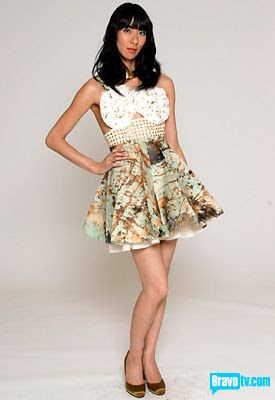 Kelli's use of creativity and many techniques impressed the judges so she won the first challenge. Daniel really did a great job with those cups though.

It's too early to say who is going to stand out or how good the season will be. I guess we will just have to watch and see.

Click here to see all of the outfits.
designer Project Runway TV + Film