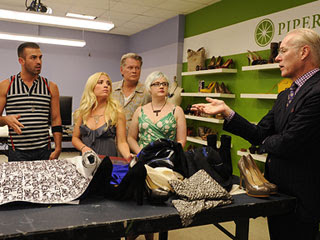 I was not happy about several things during last night's episode.
Ok. Breathe.

Last night the producers of Project Runway wasted one of their greatest challenge ideas on a team challenge. The designers where placed into two teams of five with no leaders. They all got to design prints, but they had to do it along the lines their team's chosen theme. Then, only six of the prints were made into fabric. (Only five got used). We didn't even really get to see all of them.

Each team was tasked with creating a five piece line complete with music, a video backdrop and cohesive styling. They were given two days to do this. It's actually a pretty cool challenge. I wish they would have left the printmaking out of it. It would have been just as interesting on it's own. If they needed an extra challenge they could have made them use prints from Betsey Johnson's warehouse (like they did with Diane von Furstenberg that one time). Using Betsey prints would have been a great challenge. Besides, only three looks in each collection needed to use the print so it wouldn't have been overwhelming. Look, I fixed the show. Now we just need a time machine.

Despite the episodes many faults, it yielded what may be the best team-created line ever produced on Project Runway. Anya, Viktor, Olivier, Bryce and Anthony comprised Team Chaos and caused shocking little of it. They worked together as though they were born to do so. They created interesting, graphic prints in black and white that didn't look boring or overdone. The pieces shared common design elements. Each designer challenged him or herself to create something new. The theme of Rorschach/ink blot test theme got a little lost, but that's probably because they didn't get any screen time to show us how they carried it through. The video's mirrored kaleidoscope quality was fun but not distracting. In fact, the only criticism Nina came up with was the hair and makeup, which could have been more polished. I want all but one of Team Chaos' looks.

Team Nuts & Bolts, however, may have done better to simply dress their model's in nuts and bolts (but not washers, Emilio). Or maybe they should have just thrown nuts & bolts at each other until someone lost an eye and was therefore eliminated. All they did was fight. I don't know how they made anything. Even after Tim made them all join hands (because it's probably against the rules for him to knock their heads together) and sort of patch things up, you could have stabbed the tension with a 6-inch stiletto. To be fair, there was probably no way the personality bungle of Joshua, Bert, Becky, Laura and Kimberly (poor Kimberly) was going to be remotely productive. Almost everything from the video to the prints to the entire collection was a disaster. Watch both runway shows in the video below. Team Nuts & Bolts is followed by Team Chaos.

Team Chaos
Bryce made the only look for Team Chaos that didn't make me want it right this minute. But that has more to do with my style than his look. I think he did a pretty good job. The judges did name it as the weakest, but they still seemed to like it. Also, the back of the tee is quite cool (watch the video to see it). Also, notice the mixed prints in the pockets? Joshua tried to do the same thing with much less success. Way to go, Bryce.

Anthony Ryan's look is a great example of how to fit into a team aesthetic without losing you're own. This is clearly all Anthony Ryan, but it's also all Team Chaos. The separates work well together but won't be boring on their own. He edited himself well by adding the bolo tie for a pop of color and no other crazy accessories. I want to see more like this from him.

Viktor went a little outside himself to create a gown. He really redeemed his gown making skills from the disaster he made with Bert during the episode on stilts. I love this. It's so chic, a little surprising and fun to watch move. The sheer material creates the square detail in the back that most of the looks have for a really sexy, not-too-revealing effect.

Olivier got the most screen time of all Team Chaos because they kept acting like he wouldn't finish his pants. And it almost did, but Anya helped him. (Wait, I thought she couldn't sew. I think she may have proved we can stop talking about that). Also, Oliver made quite a come back after being in the bottom last week. This jacket is incredible. I want one! And I do not care the least that he didn't make anything to do under it. It's awesome enough on its own.

Anya made this cocktail dress to challenge herself since a gown would have fit her territory better. She did a great job. It's a very chic little number. Also, it earned Anya her first win. The judges had a terrible time choosing a winner. All of the designers picked themselves as the winner (and rightfully so) except Bryce who picked Anya. It seems fair since she helped with Olivier's pants. I actually wish the judges would have declared them all winners with immunity and left us with only four vulnerable designers next week. Now, that would have been entertaining.

Team Nuts & Bolts
Kimberly probably made the best look of her team. The shirt looks better pulled down and standing still (think about movement on the runway, people). She is the only one who didn't use the prints. Michael Kors said, "Maybe Kimberly was smart and realized a lot of women didn't want to have 'canceled' written all over their crotch." Yeah, her strategy seemed to be "create something that sort of fits the theme and looks decent so I can survive this." Her look isn't great, but her strategy worked. She was the first of the losing team dismissed from the elimination round on runway.

Laura prompted a great quote from Tim. "Frankly, I'm troubled by your jumpsuit." Me too. I'm also trouble about why you spent so much time talking Joshua off the ceiling and acting as his therapist. This is a competition. Ignore him and make something good. This is far from an eye-seering atrocity, but it's also far from anything worthy of being on Project Runway.

Bert started the day off rocky. He threw a bit of a mumbling fit because his design wouldn't print, but in his defense the latter end of mumbling and cursing was because his team didn't care that they hadn't seen his design, didn't acknowledge his problem and didn't mind making the print decisions without him or his print. His clock design wasn't great, but I'm not sure it was worse than what he ended up with. His anger was justified. Joshua's reaction to him was bonkers. Bert was actually really nice in spite of it all. In a solid this dress wouldn't be so bad (lose the shoes too). I liked the zipper detail and the back wasn't aweful, but it was still pretty boring as a whole.

Joshua was accused by his team as being the reason they had such horrible collection. It's not entirely true, but not entirely false either. He responded by scowling at the judges, "I have three separates made impeccably." Well Joshua, you have three separates. The jacket could have been cool, but it didn't show up well on the runway. I can't tell if the pants are well made because the prints are making my eyes hurt. The blouse-thing doesn't look like much of anything. Also, you're behavior would have you permanently banned from preschool. Joshua is a pretty good designer so I would hate to see his temper tantrums get him eliminated, but I don't know if I would have blamed the judges had they decided to cut him.

Becky ended up going home, which was really sad for her personally. Everyone was pretty mean to her and called her work sad and boring. For the most part her work was boring. I think she really had reached her limit on the show. Her jacket was kind of cool this week, but her skirt and blouse weren't. I get why they cut her. It was going to happen soon anyway. I'm just sad for her that it happened on team challenge instead of a challenge where she got to make her own decisions. Also, it seems we've reached the part of the season where a designer can be eliminated without every being in the bottom before since this was Becky's first official bottom slot.