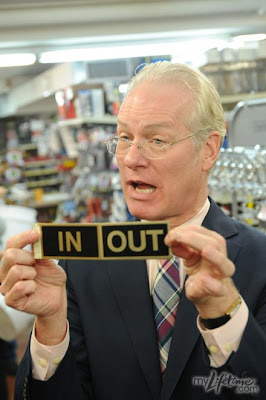 The Project Runway unconventional materials challenge is always my favorite. Last night the designers had to shop at hardware store to create their look. They also had to create a standout accessory as part of their look.

We're getting to the point where I don't have a designer I really want to see go home because of poor design. These designers are all pretty good. The designers who found themselves in the safe slots were mostly futuristic. Jonathan had a sweet C3PO dress that didn't make the top three purely because of the awesomeness of other designers. Ben's was also a bit C3Po, but not quite as successful. Seth's could have been incredible, but it just missed the mark. I like the idea of it though. Amy's was another favorite of mine. She was back in Amy form after those pants last time. I would love to have hear more about this dress in judging. 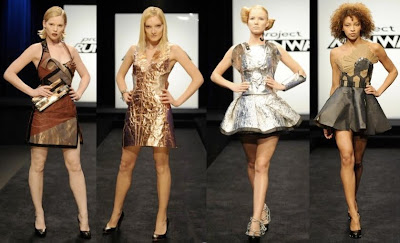 I can't wait until we reach the point where they all get judged on the Runway. The judging is fascinating. Maya was my pick to win this week. She hasn't won one yet but remains consistently awesome. I love her. Plus, she is an incredible accessory designer so I thought that her key necklace might push it over the edge for her. Her dress is made of screen and her jacket is made of a stiff rope. So cool. You could really wear it out on the street. Sadly, she didn't nab the win, but she was in the top three.

Mila's color blocking is getting to be too much, but her idea to you paint tray liners was just brilliant. She lived up to the creative use of materials completely. It was stunning and even moved beautifully. Her construction is perfect. She accessory was a name plate cuff, which the judges thought was quite clever. Mila didn't pull a second black and white win though.

Jay Nicolas did. Project Runway designers have a bad history with garbage bags. They usually end up just looking like garbage bags. Jay turn garbage into leather. It was wearable (except for the heat of wearing plastic that is). Michael Kors even says "In a million years I did not think this was bias cut trash bags." His accessory was a braided "leather" belt. It really looked like leather even though it too was garbage bags. Plus, the styling of the top is just awesome. He deserved the win (even though I would have liked Maya to have it). He's the first designer this season with two wins.

Of everyone, Anthony did probably deserve the bottom three spot, but I don't think he deserved some of the criticism. His dress did lack innovation and creativeness as far as design. However, he did make very harsh materials look very soft. The judges criticized this, but I disagree. It think he gets credit for doing that. It could have been a lot better though. I'm a little worried for Anthony in the future. He doesn't have the high end fashion sense of other designers.

Why Emilio didn't go home is still beyond me. I know a lot of you loved his winning dress from the first episode, but I've never been impressed or exciting. I don't think he's that innovative or talented or interesting. I try not to judge by personality, but I really just don't like him. He annoys me. I would like to see him go home. I'm bored. This "bathing suit" look was heavy, tasteless, cheesy, tacky and not clothing. Note: Washer and twine do not make bathing suits, clothing or anything more than jewelry at best. In fact, Nina asked why he didn't make any clothing. The guest judges called it a "bloody disaster." Even after his poor model smiled through the whole thing, Emilio ditched her for a different girl. She almost got eliminated after that. Jerk.

Jesse went home. The judges called this a dirty vaccumm bag. Michael said, "She's dress up as a Hershey Kiss." They liked the back a little, but hated the rest. I'm a bit sad to see him go because I kind of liked him. He was one of the weaker designers, but I thought he'd last a bit longer especially considering Emilio's dress.

Which one was your favorite? Do you think the right person went home? What did you think of Emilio's creation?
Project Runway

Nathan said…
Emilio should have gone home and I'm still baffled that he didn't.

Not only did what he made look like the model got into a bad fight with washers at a twine factory, hes straight-up lied to the judges.

I almost threw a pillow at the TV when one of the judges commented that she was impressed that he'd put that much thought into it.
March 6, 2010 at 7:54 PM

Rachel said…
Nathan and I both YELLED "WHAT?!" when Emilio didn't get kicked off. Ridiculous...