Project Runway S10 E5: To Scream Or Not To Scream 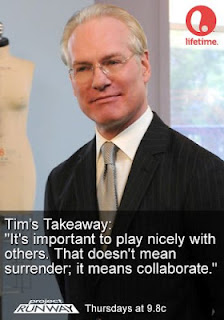 Anyway, the designers were challenged by Nina to create a capsule collection of work wear for the Marie Claire at Work magazine supplement.  They had to do this in teams and follow up the workroom drama by collaborating on a fashion shoot. Also, no clear team leaders were assigned. Let the games begins. Two teams were chosen, one of five designers and one of six.

Team Five mostly worked together well. They had some disagreements about colors, and Gunnar felt like he was being made to tailor their ideas instead of make his own, but little drama came out of that because the designers wanted to work. Gunnar ended up starting over with four hours left, and it showed. Their fashion shoot went mostly well. They fought over which pictures to choose, but they didn't have any meltdowns. Click through the slideshow to see their designs.

After the judging, Heidi asked each designer to name the weakest link on their team. Fabio copped out by saying Ven because he knew the judges would never eliminate him. Heidi said that was silly. Everyone else, including Gunnar, picked Gunnar's dress. He should have gone with his gut from the beginning rather than bending to the will of the team and having to start over at the end.

Team Six could have easily ended the episode with Elena actually exploding from screaming so much and Raul disintegrating into a puddle of whimpers, whines and wobbly/angry outbursts. Raul refused to consider the ideas and desires of any of his much more talented teammates. Elena refused to accept that anyone else could have an idea, let alone a good one. Mostly, Elena screamed; Raul whined; Alicia quietly worked; Sonjia tried to work but got held up by Raul; Melissa stayed out of things (except the photo shoot); Dmitry tried to work while Elena told him that his fabric chose was terrible (after he had already made the dress). In conffessional, Dmitry told the camera "Everyone hates Elena. Even if they say they like her, they hate her." I might have to agree, especially if she keeps saying things like "Pink is so cliche" or "I don't know what women wears navy blue anymore." What?

When asked which designer was the weakest link, this team delivered mixed results. Melissa, Alicia and Sonjai simply named Raul. Elena also named Raul but added that he should go home because "he doesn't even know how to put darts into a shirt, and his construction is horrible." Raul, of course, nominated Elena for a trip home. Dmitry also ripped into Elena. I'm sure he thought Raul was the weakest fashion link, but Elena did everything she could to tear apart the team and make their lives hell so I'm glad Dmitry called her out for that.


Top 3
I was surprised Fabio landed in the top three with his t-shirt dress. I didn't like it at first, but when I thought about the styling possibilities I saw why it could be a great garment to own. I still didn't think it was the "wow" piece that the judges declared it to be. 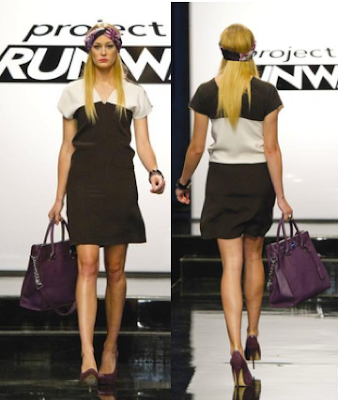 I loved Christopher's look, and so did the judges. They especially liked how he made that print feel fresh with his clever fabric manipulation. Christopher may had a win here, but he himself noted that his jacket wasn't perfect. It wasn't his best piece, but I liked it. 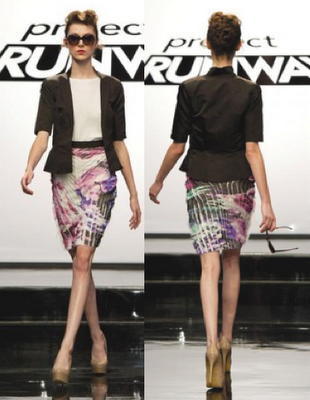 Melissa nabbed her first win with this simple blue dress. I liked it. I think I would still rather see Christopher win, but this was a strong dress. It was both easy-to-wear and interesting. The exposed zipper gave it some extra edge. It could also be styled many ways to suit many different women. I'm also impressed with her use of bright colors. She should try that more often. It shows off her designs better. 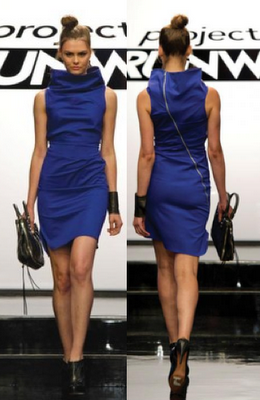 Bottom 3
Elena didn't really have any risk of going home, but the judges observed that her giant shoulders are tired. Her other jacket was much better, and they hoped to see her do more of that. Also, her attitude deserved some punishment. Seriously, don't yell at people. It's not that hard to be civil. 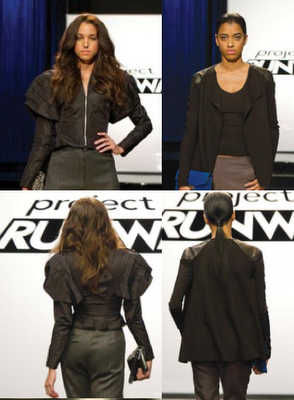 Gunnar commited the sin of "fallen souffle" boobs. In the world of Heidi this is unforgivable. He also didn't create much of a dress here. I was bored. The judges were bored, but I don't think there was any chance of him going home either because... 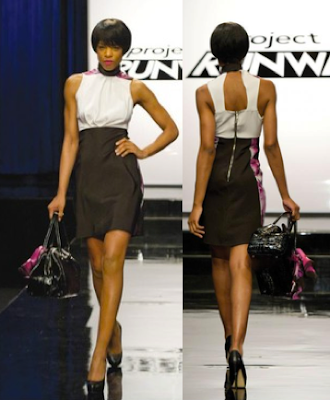 Raul's work was terrible. Neither top was interesting, well made or fashionable. Also, he whines too much and his hair bothers me. Bye bye. Don't come back. 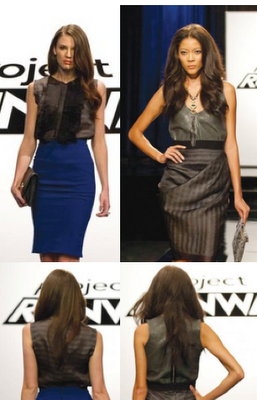 What did you think of this week's challenge? (I was bored). Did the right people win and lose? Do you hope we get more of guest judge Joanna Coles? Becuase I didn't get enough of her in this episode, and I think she should feel free to join the show as a regular any time she wants.
Project Runway

Elizabeth said…
I didn't see how they could critize Dmetry's look where you could cover it with a sweater if need be, but thought Nathan's look was acceptable with that much skin showing. My rule of thumb with office looks is you should be able to tastefully wear a bra with it. I liked Christopher's, but the fabric was fraying at the end so it didn't seem as well put together. Overall I agreed with the decisions.
August 17, 2012 at 3:42 PM

I'm really glad Raul went home. Not only is he not the best designer, but he's SO negative and whiny... and I hate his hair.

I thought the challenge was fine. I'm ready for some more unconventional/ avant garde challenges though!
August 17, 2012 at 4:39 PM

Jael Paris said…
Knowing nothing about Elena, I like her big shouldered jacket, but that's not a work item. I agree with Elizabeth about bras. If you have to buy a specialty bra or convert your straps, it's not proper professional attire.
August 18, 2012 at 12:08 AM

Unknown said…
@Elizabeth, I totally agree. Dmitry’s outfit would be so beautiful for the workplace with a nice cardigan over it. I would wear that into my office at Dish in a heartbeat! I agreed with who the judges chose to send home as well. Raul’s whining will definitely not be missed. In fact, I got in the habit of recording the episodes so I could fast-forward through all his moaning and groaning. I’m going to keep recording the episodes so I can do the same thing with Elena’s incessant yelling. And since we have the Hopper DVR, with tons of room to record, these hefty hour-long shows will hardly make a dent in the memory space. I don’t know what my hubby would do if his preseason football recordings were replaced with Project Runway!
August 22, 2012 at 12:06 PM