Project Runway All-Stars: It's Back! 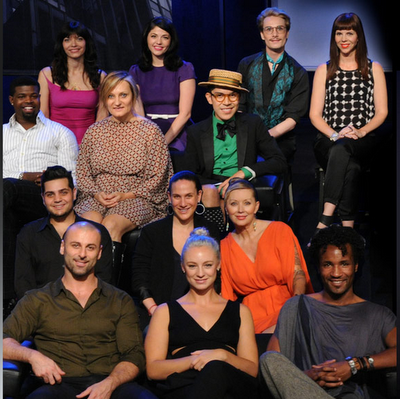 Project Runway is back, and it feels just like old times. Sure, the regular season just went off the air in the fall, but the show has been suffering for years. The fashion as been mediocre, the drama has been amped up, the judges have been smoking something and Lifetime seems like they've been trying to silence Tim Gunn. This fresh take on Runway featuring new judges, a new mentor, better prizes and familiar designers echos back to the Bravo days when the show, the fashion and the critiques were all exciting.

The Designers
This isn't exactly a best of the best collection, but it is a long list of heros and a few villains from seasons past. The producers seem aware that Mondo is a huge fan favorite so he got lots of screen time. Kenley got just enough screen time to start annoying me. Anthony is our same beloved (and somehow not annoying) southern belle. Elisa reminded us all how loopy she is, and we all got to remember how much we like Sweet P. It's a good bunch. There are some stand-out talents like Rami, Mondo and Austin. For some reason Jerrell is on a mission to be annoying. Michael C. still doesn't have confidence in his skills, even though his season on Runway should have helped him. 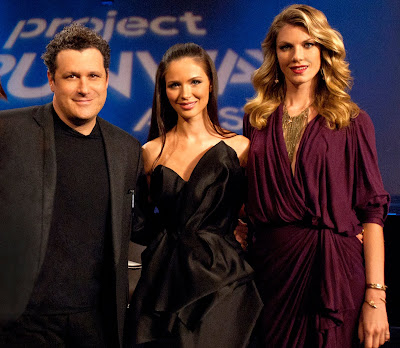 When I heard that Heidi, Michael Kors and Nina wouldn't be joining us for the All-Star season, I worried. But I shouldn't have. I really didn't miss them that much. Model Angela Lindvall has taken on the role of Heidi, which seems like a pretty good fit so far. Georgina Chapman of Marchesa is hardly a Nina, but she offers strong critique and isn't afraid of imaginative fashion (she won't be picking commercial over couture any time soon). Isaac Mizrahi is the third judge. He worries me a bit. He did good for the premiere, but, well, he's Isaac Mizrahi. It's interesting that there isn't fashion editor on the panel in light of the prizes.

The Prizes
Whoa! The prizes are crazy. On top of the $100,000 standard cash prize, Lifetime sweetened the deal by offering the winner his or her own boutique inside Neiman Marcus Stores. This winner won't have to fight for distribution, which is huge. They will also get industrial sewing machines, fabric printers and surgers from Brother. And HP & Intel are giving $100,000 in technology and office space. And don't forget the Marie Claire spread, which is also better for the all-stars. On top of the spread they get to be guest editor for a year. I'm not sure how much they will get to edit, but it will keep their name in a major fashion magazine for a year. That kind of press is priceless for a reality TV winner. I'm sure it will help Marie Claire sell magazines too. 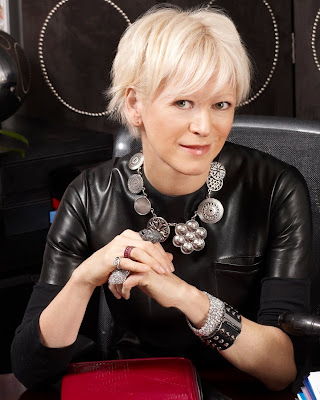 The Missing Gunn
Speaking of Marie Claire, Joanna Coles, the editor in chief will be acting as Tim Gunn for the all-stars. I miss Tim Gunn. He isn't here and it's sad. I hope he gets to drop by as a guest judge or mentor during the season. However, Joanna is off to a brilliant start as mentor. She's fierce. It's like they've hired Miranda Priestly to be the mentor. I love it! If we can't have Tim, she's a good substitute, mostly because she's totally different.

The Challenge
The designers were first tasked with showing a piece of their existing work that best represented them as designers. We got to see a little of what they've been up to since their time on Project Runway. After the very brief runway show and a video message from Giancarlo Giammetti and Valentino (!!!), the designers headed to a 99 cent store were they were given $100 to spend and challenge to create a look inspired by the look they had just shown the judges.

The Workroom Drama
Michael and April both bought mop heads to make their garments. Everyone made a big deal of this, but it ended up not mattering at all. Austin's hot glue gun melted a hole through blue plastic dress, but he "made it work." Mondo scored the best quip of the episode while describing Gordana's dress: "It reminds me of Easter at a Mexican family's house. It's a piñata. I hope her model is full of candy." The award for best crazy goes to Elisa (no surprise) during her consult with Joanna. When asked if she thinks her look will surprise the judges Elisa responds, "I think it's important to make it surprising for yourself." Huh?

The Safe Designers
Anthony (left) took to crepe paper and safety pins. Shiny and streamers, this is Anthony. It's a good dress for what he was working with, but he's not showing quite enough improvement from his runway days, and he needed to show improvement to go up against some of these other designers. I have high expectations for Austin (right). He came in second on the first season. He has had the most time to grow. He already had his own design show with Santino where he had to make lovely wedding gowns fast. This, I'm not so sure about. He did interesting things with the materials he found, but it still looks like something my Barbie wore in the 80s. I'm not sure what he's doing with this. 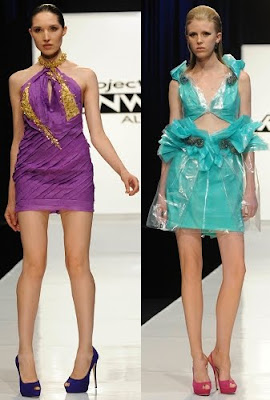 April and Michael went head to head on with mop heads. April (left) may have had more intricate design work than Michaels, but the television static weave of the mop heads obscured her work. I'm not a huge fan of the fringe at the bottom. Michael (right) loves to drape. In fact, I'm worried that's all he can do. His draped look had cool movement and more interesting shape, but it also made his model look wider than she is, which is a no-no on the runway (at least when Nina and Heidi are judges; I'm not sure about the rules with this new set). I'm not sure who won this round, but I think they both did a good job with mops. 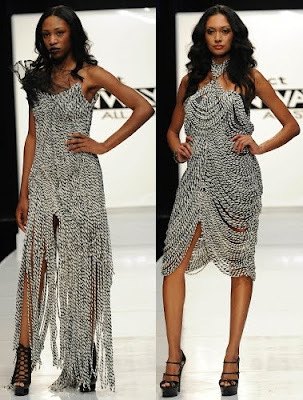 Kara (left) didn't impress me. The look is put together fine. The belt is kind of cool, but nothing about it looks fashion forward, interesting or innovative. Kara's kimono dress was really her only big hit from her time on runway. She's struggled since then too. I hope this isn't an indication that she'll be struggling this season. Kenley's dress (right) is better than Kara's and she gets bonus points for using a bath mat. The shape is cool, and I like how she sculpted it. However, it still looks like a bath mat. I'm not sure she transformed it enough. I also don't think she did enough to transform loofa on her model's head. 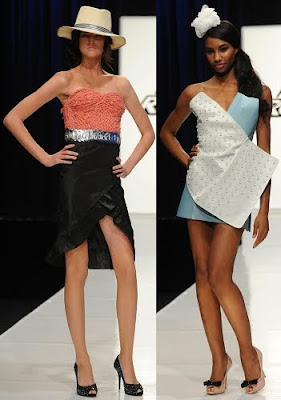 Of all the safe designers Mila was my favorite. I remember seeing her as a bit of a villain in her season, but coming around to liking her in the end. And I still like her. She used color here, but kept her bold graphic aesthetic. The tights/leggings are seriously cool. The tunic has a lot of impact, but seems a bit short. Good first showing though.

The Top Three
Jerrel landed in the top three, but he was the first to be dismissed and the judges acted as though he was no where near the top two. I agree, but I do love that he created something lovely and wearable from the dollar store. I'm just not a fan of this persona he's adopted. Annoying.

Mondo and Rami duked it out for first place. They are not here to mess around. Mondo is seeking the win he should have had over Wretched Gretchen. Rami is here to prove he can do more than drape and could have won any season other than one where he went up against Christian Siriano. I'm cheering for Mondo, but I won't begrudge Rami some top scores. He comes from the best season ever, even if he wasn't always the most likable.

Mondo came in second. I love it. It didn't look like garbage bags, electrical tape and plastic cowboy hats. It's new and different for Mondo, which means he's growing and trying new things. It was made so well. The judges loved it.

Rami just topped him though. The structure of his dress was incredible. It look editorial ready. He didn't drape anything. I love that he went so structural to fight the perception that all he did was drape during his time on Runway. I have no idea how he coaxed that out of the dollar store. He got the first win, which will be for bragging rights (and maybe team picking rights only) since there is no immunity this season.

The Bottom Three
I think Gordana landed in the bottom three for two reasons. First, she didn't make a look inspired by her first look. She tired to copy her first look. Also, it had too much going on. In the end she wasn't nearly as bad as the other two and was clearly safe.

Sweet P. Oh Sweep P. I adore her, but she doesn't make that easy. She has a tendency to go far too crafty with her looks. They used to be kind of charming, but the current DIY movement in fashion and design has moved so far beyond that crafty feel that her old tricks are going to get her in big trouble. I like her and what she is capable of. I hope this trip to the bottom two inspires her to do her best rather than making her doubt herself like she often does.

Elisa, the all-star seasons resident crazy, was the first to go. I have no idea what her look was about. Neither did the judges, even after she tried to explain. She was fun to have around while it lasted. I would have liked to see more conversations between Elisa and Joanna, but I'm glad she went early since I doubt there is any chance she would last very long at all. 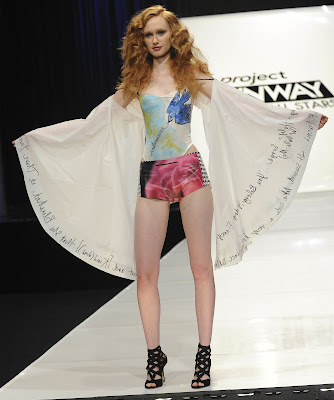 I'm extremely happy with the winner and the top three in general. I'm also pretty happy about who went home. I'm just glad it wasn't Sweet P. I want to cheer for her for a little while longer at least. I'm already watching Mondo and Rami to be the top contenders. I'm hoping Austin and Mila will be up there with them. What do you think? Do you love the All-Stars season? Who are you cheering for?
Project Runway