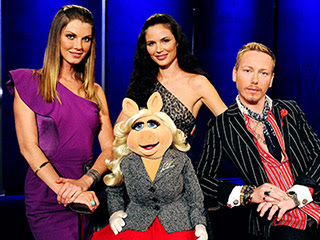 This week the All Stars were challenged to create a flamboyant cocktail dress for fashion icon Miss Piggy. I've read a few reviews and recaps that said this challenge was silly and late. (It seemed late because All Stars was originally supposed to start airing late last fall and got bumped back). I thought it was perfect. Miss Piggy wears fabulous clothes and has experienced Madonna-level fashion evolutions. She's done fashion editorials in the lead up to the new Muppets film, and she often out-dresses the celebrities she appears with. Her look is constantly changing, and she has that true diva personality needed for pulling off over the top looks. Also, it was fun, and I think fashion should be fun.

Safe Designers
April doesn't have fun with fashion. For someone who says her look is Tim Burton-inspired every week, she has very little whimsy in her designs. She seems to have disregarded the challenge to design for Piggy, but her dress wasn't as offensive as Mila's so she was in the safe batch.

Jerrell's dress had a lot going on. It was also completely forgettable. Had Heidi been there, she would have yelled at him for the fit, which gave the model saggy boobs and wide waist. Good fabric choices, poor design.

Kara fought with Mondo and Austin over accessories. In past seasons, I've seen the designers race to that accessory wall and claim their goods. I have no idea why everyone left them on the wall this week. I see why Kara fought so hard. The gloves were the only thing about this look that said, "Miss Piggy." I didn't care for the hair and makeup. The cut out would be awkward on a Muppet. The dress design without the cut out, would be so generic I could probably buy it at Target.

Anthony created an unexpected look for Piggy. He didn't go with over-the-top pink, which sadly made the judges over look him. Miss Piggy has been wearing different colors lately. She portrayed a French fashion editor in her latest film so she's been going with fashion forward over Piggy pink. The plume of feathers and multi-directional stripes deserved a top three spot.

Mondo deserved a top three spot as well. If Piggy did a guest spot on Mad Men or had co-starred in The Help, she could have totally worn this dress. It was pink, fun, unique and styled well with the gold accessories, retro hairdo and bow.

Top Three
Kenley landed a top spot, but the judges all talked about her dress like they didn't like it. I could understand this if no other dresses were worthy of the top three, but Mondo or Anthony could have easily taken her spot. The judges weren't sure about the construction of the top. Miss Piggy wasn't sure what wearing giraffe print would say (She knows what leopard print says). The design didn't seem like anything special to me. Piggy did, however, like the hat because it could double as a pot scrubbie.

Rami got a better reaction from the judges, but I still don't think his look belonged in the top. Yes, it was pink and fluffy, but I'm pretty sure my Barbie wore this in 1991. Because of the seaming his did, the polka print was segmented and looked off. The ruffled collar looked especially dated. Fill-in judge, Eric Daman, called it Hog Couture, which offended Piggy. She said, "This is the most Garish Outlandish Ridiculous thing I've ever seen. I love it. It looks like a candy store exploded." Well, if that was the criteria...

Michael has the final top slot and took the win. I don't remember Michael being this good in his season. He's really stepping it up, and I'm impressed. I like the subtle pink running through the dress. I love the structure at the hat. (Eric wasn't sure about it with Piggy's ears, which lead her to karate chop him because he kept bad-mouthing her ears). It's a deserved win, and I super happy none of the other top three dresses won.

Bottom Three
Austin landed in the bottom three for obvious reasons. I like the idea of structure behind his dress, but the fabric choices--type and color--were all wrong. The colors didn't feel vibrant (they were more Bratz doll that Miss Piggy) and the fabric looked a little tortured from all the work he'd done to it. I have no idea what the hip bows are doing. I'm all for bows and even exaggerated hips, but these looked tacked on. (It would have been cool if the bows had been built into structured hips). I agree with the judges that this might work for a space setting. Austin is talented, and with a few tweaks this could have been kind of cool, but I'm starting to question his taste level. (I'm also starting to miss Nina).

Mila, like April, chose to serve her point-of-view over what her client wanted. I know Mila can make over the top, flamboyant dresses. She used to work as a costume designer on projects like Dancing with the Stars, Austin Powers, Glee and Mad Men. I have no idea why she made this. It wasn't original. It wasn't Miss Piggy. It wasn't styled well. It wasn't even some of Mila's better work. I'm glad she's not out yet, but this deserved the bottom two treatment.

Gordana is out. Joanna warned her that this looked too much like a nightie, but Gordana didn't listen. The design wasn't even an original one. I've seen this as a nightie, and I've seen this as a dress. In fact, I've seen this on Miss Piggy--during her child star days on Muppet Babies. This dress being the worst of the bunch says good things for this All Stars season. I can recall times in Runway history when this would have been the best garment just because it looked like clothing. The designers didn't stretch themselves as much as they could have for this challenge, but they are making a better showing than most of the recent Runway seasons.

What did you think of the Miss Piggy challenge? Who are your picks for winner, loser, and top an bottom three? Also, who do you see showing up in the finale? I'm thinking Mondo, Anthony, Michael and maybe Rami right now.
Photo Credit: David Russell
Project Runway