By Jael Paris - May 04, 2011
The Met Ball kicks off the biggest annual showing by the Costume Institute. It's a celebration of the fabric arts. The Met Ball isn't about celebrities. Yet as I flipped through the photos of the 163 high-profile guests, I just wanted to scream "Why is she there?!" Savage Beauty is honoring the life's work of a designer who died too soon, a designer who was friends with several of the people in attendance and who famously hated celebrities who consumed without understanding, who want to be associated with something posh and pretty in hopes that they will in turn be associated with poshness and prettiness. Monday's party was about Alexander McQueen and Sarah Burton, but somehow that was lost among Cheerios, Gossip Girls and Twi-tards. They can take their Michael Kors dresses and go away. 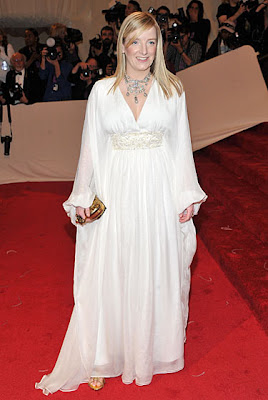 Sarah Burton is a very tired woman.
That said, where were Alexander McQueen's friends and actual clients? Where was his former muse Kate Moss? Bjork? Lady Gaga? Cate Blanchett? Philip Treacy?! Sarah Jessica Parker was therein a classy beaded McQueen. Daphne Guinness, who donated several pieces for the exhibit, was there in the exquisite grey feather gown Sarah Burton made for her McQueen debut. I suppose I should be happy so many people were in Calvin Klein and Stella McCartney as few could pull off McQueen with the aplomb of Daphne. 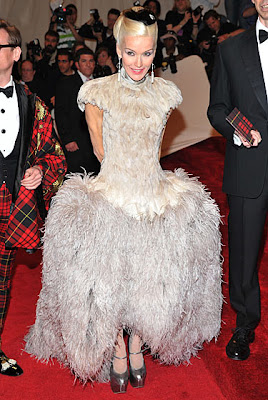 Christina Ricci doesn't get out enough, but she's always at the Met Ball (again, why?). She wore one of my favorite dresses in 2008, the Year of the Superhero. While many of the celebrities played it West-coast-best-dressed-list safe, Christina knew how to bring the drama to an event celebrating drama. And kudos to Zac Posen for designing this lovely. 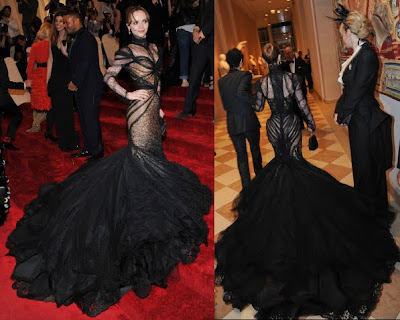 Madonna did an excellent job of putting it away. Remember her desperate plea for attention from two years ago (because she had landed a Louis Vuitton contract (although it was for "Models As Muse" so maybe it was okay)? Same glorious color in more fabric. This Stella McCartney could be a little too old Hollywood for Mage, but the stars bring a youthfulness and light heart (two things that aren't said about Madonna generally). 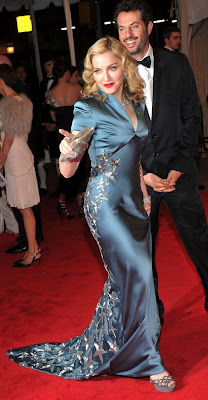 I continue to love Givenchy's most recent couture show and anyone who wears a piece from it. Aside from Liv Tyler, see Cate Blanchett at the Oscars and Florence Welch at the Grammy for more drooling. Bonus points because Alexander McQueen was really into ornithology.

When I first saw Ginnifer Goodwin, I was skeptical, but each time I flipped past her I had to look again. The shoes and dress and necklace all work so well together (maybe too matchy?). The aqua eye and tousled hair push it into memorable territory. And I love that her dress is from Top Shop. 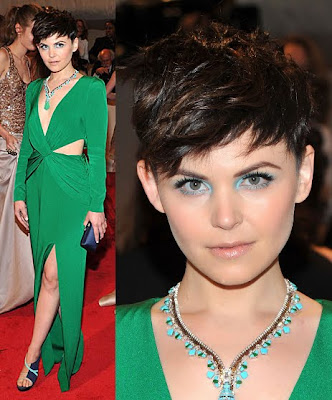 Join us on Facebook to discuss other interesting dresses from the Met Ball.

Audi said…
That Zac Posen dress is just breathtaking, and Christina Ricci looked amazing in it. WOW. And kudos to Madonna; I can't remember the last time I saw her looking so radiant. That dress is 100% classic Hollywood glamour.
May 4, 2011 at 1:28 PM