When I think of the stylistic elements of superhero costumes that would translate well on the red carpet, I think primary colors, metallics, big belts, capes and big shoulders.

Vogue editor Anna Wintour hit shoulders and metallic in her Chanel couture gown, and she looked every inch the ice queen. Models Amber Valletta and Mischa Barton (because she's a better model than actress) both went the Anna route of glitz and big shoulders. (Why was Amber the only person I saw in anything resembling a cape? Use the excuse, people!) Poor Mischa is going to be fugged and criticized for her choice Missoni of dress, but I think the shoulders and sequins are dramatic without overwhelming her. Plus, the trendy neutrals are nice on her skin.

Back on the bright side were my two favorite looks of the night. Christina Ricci was stunning in a floor length rose hued haute couture Givenchy. While the bodice part is a nice homage to Wonder Woman, it also lengthens her petite legs. I bet walking in that swirl of chiffon was a marshmellowy dream. Also getting high marks for fabulousity were designer Zac Posen and his date Kate Mara in primary colors who together gave off a clear Superman vibe without having to don briefs over pants. 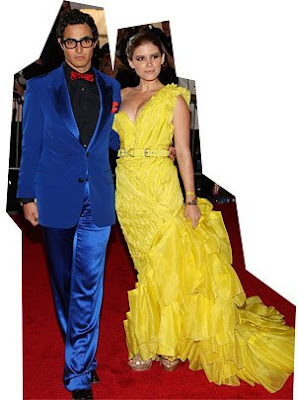 For more pictures of attendees in couture, visit style.com or nymag.com, then come back and tell us your favorites! 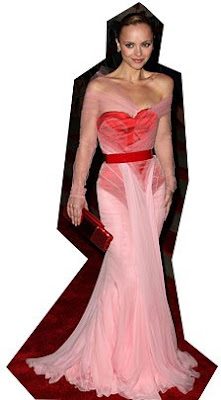