By becca - February 14, 2011
Last week Jael Paris dressed several nominees for the Grammys. Now that we know what the stars wore, we're putting it to a vote. Who picked better? Us or Them?

Jael and I both find it difficult to critique what Katy Perry wears because we just don't like her and don't hide our bias well. Jael, however, did give Katy some adventurous and beautiful choices for the Grammy Red Carpet. Sadly, it seems Armani raided their cheap Halloween department (who knew they had one!) for Katy's craft store angel costume. 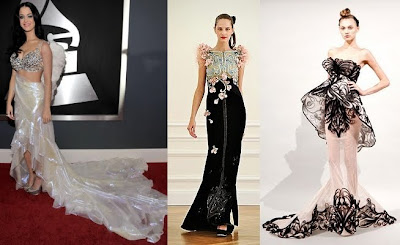 poll by twiigs.com
Lady Antebellum won big last night, and Hillary Scott certainly had time to sparkle during her multiple acceptance speeches. (Fun Fact: Hillary Scott auditioned for American Idol twice and never made it past the first round.) We felt she missed the opportunity to sparkle in her dull black dress. It looked fine, but we think she deserved spectacular. 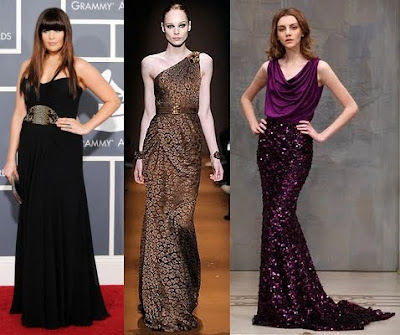 poll by twiigs.com
Nominee Carrie Underwood was a no-show last night, but the dress Jael recommended for her showed up on Rihanna during her "Love the Way You Lie" performance with Eminem. What do you think of Rihanna in this slightly modified (hers is strapless) Dior dress? Would you have rather seen in on Carrie? 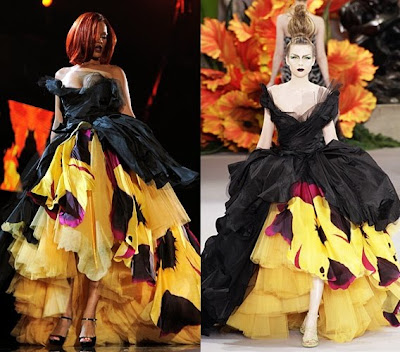 poll by twiigs.com
We already criticized Katy for wearing a costume, but we have to admit that Gaga went a step beyond costume and favored spectacle by wearing a pod on a red carpet. Again, our bias clouds our judgment, but we found Gaga's "look" acceptable because she's Gaga. Plus, nothing looked cheap or handmade like Katy's look. Although, I'm sure you could argue that Katy looked like herself too.

We'll leave this poll open to your comments. Were either of these costumes OK? Was one more acceptable than the other? Why?
celebrities

Catie D. said…
Katy Perry: Are her boobs actually getting bigger. 34C? I think not.

Jael Paris said…
I also find myself liking Gaga more as time goes on. When she first popped up, I thought she was just trying to get attention and would go retro glam once she got famous. But she just gets weirder and more awesome. Although last night, Cee-lo out weirded her.
February 14, 2011 at 7:10 PM

I LOVE LOVE LOVE RIHANNA'S DRESS!!! If I could afford it, it would definitely be in my closet!

I absolutely dislike Katy Perry. What can I say? Her clothes are hideous and she's a mediocre singer with annoying songs that are overplayed on the radio!!
February 27, 2011 at 6:28 PM