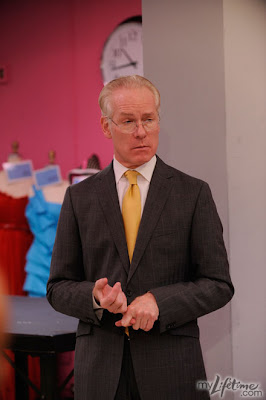 By their powers combined the designers gave us a complete planet of fashion. The designers were inspired by one of the four elements of nature--earth, air, fire and water (we can assume they all brought a little heart to the competition). Captain Planet would be proud.

In addition to clothing design, this week featured a Garnier Fructis commercial challenge where the designer had to incorporate hair design into their looks. This actually ended up playing a pretty big role in who won the challenge. It felt good not to have it be a waste of time.

Emilio, Anthony and Jay were the three safe designers this week. Emilio's look was probably the most literal look of the evening. It looked like mossy earth, which was his element. It wasn't earth-shattering, but it was much improved on the last week's look that miraculously didn't send him home. Anthony took a surprising route for his element of fire. Instead of a bright red gown or anything pageant-y he created this ashes and smoke dress. The folds along the top reminded me of his winning look. I was proud of his risky vision. Jay had immunity this week. He didn't take on nearly as ambitious of a project as he usually does, but he didn't slack either. With air as his element, he created this stunning tornado look. This guy just keeps getting better. 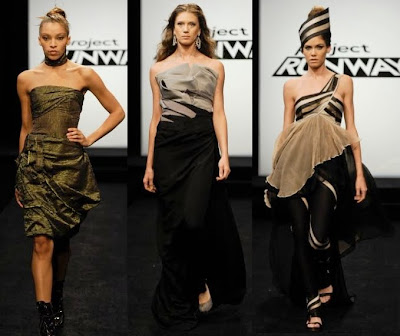 Seth Aaron needs to come be my personal jacket designer. Even those is punk aesthetic isn't really my style, I want every jacket this guys makes. He was the last one picked, and, therefore, had no choice in being stuck with air as his element. At first he seemed pretty upset, but he then though about looking out his window at the New York night sky seeing the air whip up between buildings and stars. From that he made a swirly, airy leather trench! Who thought that was possible! Alas, the talent is so gleefully fabulous this season, even this incredible coat didn't win. 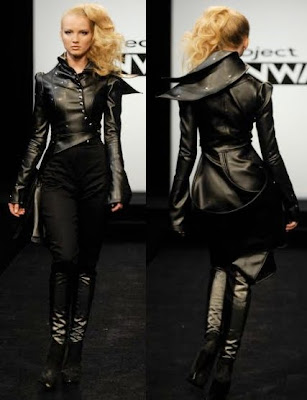 Maya found herself in the top three yet again (with no win). I don't love this look as much as last week's, but it really does speak to her inspiration of water. It had a very flowing yet chic feel. Guest Judge Roland Mouret quite liked it. When the dress came down the runway, I wrote that it was nice, but when the model turned to reveal the back, I was sold (but not sold enough to think it should beat Seth Aaron of Jonathan). Nina came up with an interesting critique though. She said Maya doesn't know who she is as a designer and feels she is always copying something from another designer. Nina is far more knowledgeable than I am, but I've never felt that way about Maya's point of view. I see her as rather strong and consistent. I'm not sure this was all that fair of a criticism. I hope it doesn't hurt Maya in the long run. 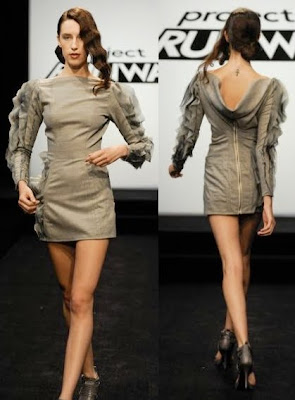 Jonathan nabbed his first win this week. He has been trying to get noticed by the judges and has only once before succeeded in making it into judging when he found himself nearly going home. His element was air, and he decided to work with what he considered the lightest, most joyful aspect of air--laughter. He had the perfect model for this challenge since she is stunning, perfectly pale and rather smiley and cute. The dress stunning, and Roland Mouret couldn't stop complimenting its romantic feel. He even said, "Its romantic and quite beautiful, but, hey, I'm French." Jonathan actually created this textile, and Nina loved how he worked the models skin tone into the dress so well. Micheal said he had the best hair and makeup in show, which I'm sure combined with handmade textile pushed him over the edge for what had to be a narrow win over Seth Aaron. Could Jonathan be a "dark horse in this competition" as they like to say on American Idol?

I'm loving this season because I really feel any of this week's bottom three could have ended up in top three last season just because they love innovation and risk taking (except Mila who would have probably won a this challenge last season by simply making something wearable albeit a little boring).

Speaking of Mila, I'm glad the judges finally made mention of her constant color blocking and dependence on black and white or high contrast looks. Nina even asked if she could make anything decent without using black and white. Mila's earth element outfit inspired by rocks and stones was really just an interesting-ish vest over a basic top and pants. No innovation. No risks. She said she wanted to show the judges she could do something different, but Nina just thought another designer had taken over her body and began questioning if Mila really could do anything different.

Amy found herself in the bottom three once again. Her highly conceptual bowl of fire/hair idea was a rather unique one, but the concept and her lack of time got the best of her. The construction was off, but hair looked cheap and messy. The idea was so close to being fabulous. This is why I love Amy. Sadly, the outcome was anything but fabulous. Heidi called it a "cat in a sling." I believe it was Nina who said the model looked like a barmaid serving her hair. They flung the insults so fast, I couldn't catch most of them. Thankfully, Amy, one of my early favorites, is safe this week.

Sadly, that means Ben went home. I really hate that he had to go. Actually, I'll hate to see any of the designers go from here on out (except Emilio, I can't forget the last week's outfit ever). This was an exceptionally sad loss though. Ben was always consistently good, but even Tim worried that the judges were picking up on the subtleties of this designs. He never really got to see the judges or have a chance at critique. Based on his element of water, he made a suit inspired by the great white shark. The pants were bad bad bad. Micheal even said "A jock strap pant? It's wacky." The literal shark's teeth were too much, but I understand how these were attempts to get noticed from a designer deals in such understated details. I was looking forward to his work in the future. I had originally thought he would be a dark horse if anyone was going to be one.

What did you think of this week's outcome? Are you sad to see Ben go or are you indifferent? Which designers do you think should be going home the next few weeks (I vote Emilio & Mila)? My top picks are still Jay, Amy (I have faith!) and Maya; who are yours?
Project Runway

Sarah Dee said…
My boyfriend is really getting sick of my endless complaints on the subject of Mila's color blocking so for his sake I really REALLY hope she goes home next week. I cannot stand one more week of her repetative designs. And even though its not my style I NEED that leather jacket.

Robin said…
My friend and I complain about color blocking every single week. I LOVE Amy. I think some of her best pieces went unnoticed, and some of her coolest concepts that flopped were VERY noticed. I'd love for her to win, but she's not doing so hot with the judges.
March 12, 2010 at 6:58 PM

Rachel said…
I'm with ya. I was glad Jonathan won- I've always liked him so I'm happy he got noticed this week. Seth Aaron has been really awesome lately too (and I like that he has a strong style without being redundant)!

I really am a little sad to see Ben go- I thought he'd work his way up to the top eventually. I knew they wouldn't get rid of Amy though- she's too good.

My picks for next to go: Emilio and Mila.