Save or Splurge: Anna Sui for Target (Gossip Girl)

By becca - September 15, 2009
The Gossip Girl collection by Anna Sui is in Target stores now. Don't rush to the nearest Target to get it because, like most super-hyped lines, it's only in "select" stores. (The Target Jael and I visited was rather dumpy and dirty with no signage advertising the line so I have no idea why it was selected). It's beyond me why Target won't release these lines to all their stores. The point of a collection at Target is that everyone can get it. Target, I love you, but this is another FAIL (see McQ for Target for previous fail).

The line disappointed. The Target we visited didn't have the complete line--no bottoms, only half the tops, and missing a third of the dresses. There are some cute pieces, but the prices are rather high for even a Target diffusion line.

Jael and I both tried on this low cut tweed dress. This hem came closest to an OK length on me and a good length on Jael. (Jael's exact comment was that it was sexy on her legs.) However, the ladies were hanging out all over the place and it looks funny with camis, which is how wore it to be decent for pictures. 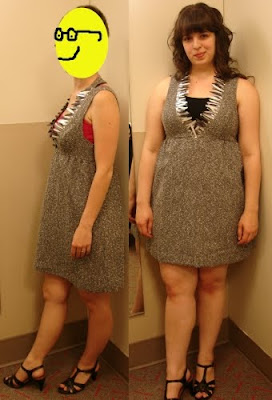 I tried on a few "dresses" to little success. I'm not nearly as happy about the orange print dress as I look (Jael is making me laugh). It was flimsy, short, a little itchy, and made me look wider than I am because of the awkward cut. The blue thing in the middle looks like its from Goodwill. Not short enough for a shirt or long enough for a dress, it's an ugly in between. I loved the last dress with its pixelated houndstooth print and adorable bow and lace trim. It would have fit, but the lining is at least a size smaller than the dress. If they knew how to make a lining and if it was three inches longer, this would have been my only splurge in the line. 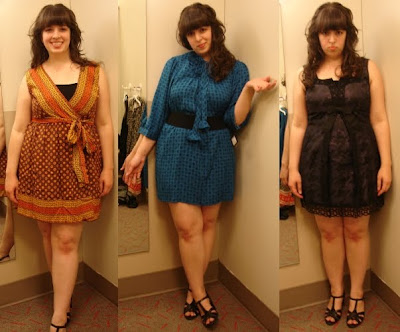 Here is what Jael has to say about the dresses she tried on: My breasts are smaller than beccas, but the "cocktail waitress" lace dress showed some side cleavage on me as well. My biggest problem with this dress is if you sit on it, you'll choke yourself with that collar. The lace, however, was pretty nice. I loved the cage dress! It's heavy and clearly a fall/winter item. Since I'd have to wear it with thick leggings so no one could see my booty, I decided not to buy it. Another two inches, however, and I'd have plopped down the $60. I fell in love with this striped dress years ago when Anna made it for her romantic pirate show. It fit wonderfully on me (it flattened becca's chest), but I decided I couldn't do enough with it to justify $60. I'm waiting until it goes on sale for $40. Another nice dress in the collection (that we don't have a picture of since most sizes were sold out), was the gothic flapper dress. Excellent construction, but it will only work on a woman with slim hips. 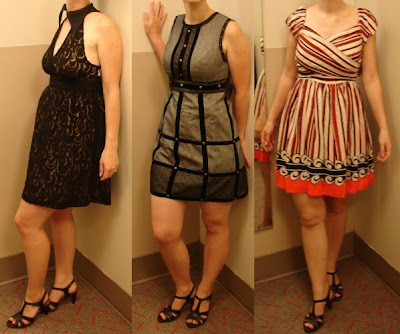 The tops at the Target we visited were mostly dowdy and too light for a fall line. The first top here had hanger loops that were sewn in at the supposed waistline and were so long they would fall out the front all the time, like they are here. Poor design. The second shirt looked cute on the hanger, but not on the person. I like the collar and hate everything else. Don't even get us started on the "rocker" hot mess. 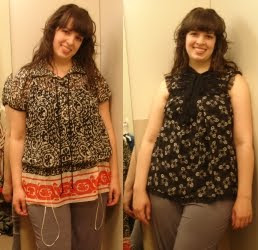 Overall, Anna Sui had some good ideas here, but a lot of the pieces weren't cut to fit the body. I would say save on most things an wait for the clearance. Unless you find a great fit in a dress you loved or you've been dreaming of owning Anna Sui forever.

Will you save or splurge on Anna Sui for Target, Gossip Girl collection?
designer Save or Splurge Target

The Commandress said…
I'll be saving my $$. I was actually at Target myself today and tried on the flapper dress. No dice. Bought a nice bra though!
September 15, 2009 at 8:07 PM

Rachel said…
I like this post- I love seeing things on different body types, because something that looks awesome on becca will probably look not-so-great on me.

I like some of the dresses in the pictures, but I'm sure they looked a little different in real life. They are almost all too short though. I agree with the dresses you liked.
September 16, 2009 at 10:23 AM