It's the dreaded client challenge. Except it wasn't so dreaded after all because the models were the clients. I worry that we won't get a challenge where they have to dress women who aren't models since that would mean no content for the Models of the Runway companion show, which, for the first time, was actually relevant. The looks would be worn by the models at an industry party and were meant to make them stand out (in a good way, of course) A few of the designers struggled with editing their models ideas into a look they could create, but most of them did quite well. Also, the judging panel was totally strange last night, but Heidi was super cute and quotable. Is it just me, or is Heidi more adorable and showing a lot more personality this season?

There were a few designers with looks I loved, but didn't make it into the top three. Christopher's bright green dress look fabulous! It was what his model wanted and he made it fit his style completely. I really hope to see him show a collection at the end of the season. Louise also had a fabulous look with the little black dress she made her model. The collar was fabulous. Nicolas made a very sleek look for his, which worked very well on her. Ra'mon's bold blue dress looked fab on his model and I'm partial to huge flowers. 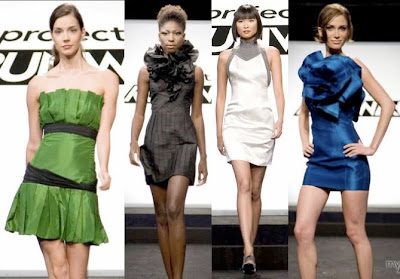 The Top Three
Epperson's model wanted something fitted, romantic, punk, egdy, classic and animal inspired. The last desire lead Heidi to ask "Do you feel like you have the kitty cat inside of you?" A comment that sounded hilarious and adorable with her accent. Somehow Epperson managed to fit all of his models crazy descriptions into a dress the judges loved. They felt it showed off her body the best of all the clothes, which is important for a model. However, Heidi felt it didn't do the boobs justice, but admitted maybe she's worked for Victoria Secret for too long.

Carol Hannah made my favorite look of the challenge. I felt she should have won. The pictures online do not do it justice but it moved beautifully and the back of the skirt had stunning pleating. Her model clearly loved it. The judges loved the mix of soft and hard and said the execution of the look was perfect.

Althea won last night. Her three piece, bubble skirt suit had the judges practicality trying to buy it off the runway. It also helped that, as Heidi commented, Althea's model is one of the best walkers. She really sells things on the runway. Althea's win gave her immunity for next week so we will see her around for a while. (Although, I don't see her in danger of going home any time soon).

Johnny was the designer accused of making a bridesmaid dress. (Someone is always accused of this during client challenges). The judges didn't think it was bad, just boring. Johnny's model like it though. She was actually the only one with a bottom three designer who wore her look to the industry party.

Logan found himself in the bottom two, which I did not expect from him. He got too turned around by his models instructions and failed to bring his own touch to the look. The judges called it a cheap prom look. Even though Logan's model said she liked it, she didn't wear it to the party. I like Logan, I hope I don't see him in the bottom two again for quite a while.

Qristyl, as I predicted last week, is out. Her look was a last minute replacement for her first idea, which Tim said looked like the model had been rolling around in bed. This has been Qristyl's problem all season. She cannot stick to a look and make it work. She is always making drastic changes. The judges said the look aged the model and made her look boring. Heidi said she would have tried to order drinks from a girl wearing a look like this at a major party. Even the model said she liked it, she decided not to wear it to the party after hearing the judges harsh comments. Also, I don't have to spell Qristyl's name anymore!

So far my favorites are Christopher, Louise, Althea, Carol Hannah and maybe Logan if he pulls it together next week. I don't expect to see Johnny too much longer, but I don't know that he'll be out next week.

Who are your favorites? Who do you think will go home next?
Project Runway TV + Film

Rachel said…
Christopher is definitely my favorite. His looks are always SO original, put-together, and well-made. He really knows what he's doing.

I think Johnny will go pretty soon too- he doesn't have any confidence and that will bring him down if nothing else.

PersimonDreams said…
I shouldn't be reading this as I have to netflix Project Runway...but I'm too excited for it so I love the sneak peaks into the next season! Thanks! You make me feel as if I'm watching :)
September 14, 2009 at 7:38 AM