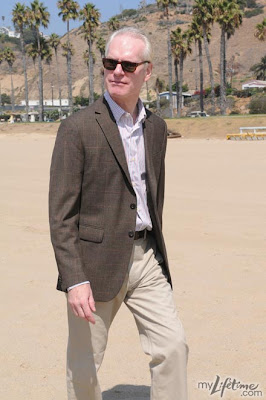 Project Runway shocked us last night with several firsts, and Tim Gunn wearing flip flops, sunglasses and a blazer was only the beginning. It was the first team challenge of the season, which always brings out all the personalities. The designers were asked to create a beach inspired look. Part way through the episode, Tim came back to announce they would be creating a second, avant garde look based on their beach look.

This week's guest judge was Rachel Bilson, who seemed to be a perfect fit to judge the California-Girl beach looks. Michael Kors was again M.I.A., but Max Azria took his spot. I already loved Max Azria's for his designs, but after seeing him judge, I just plain love him.

Shirin and Carol Hannah: These designers seemed to work well together. Their drama was kept to a minimum, and they made some nice designs. Carol Hannah's model decided to book an Arby's commercial during the fitting so Carol Hannah brought back an eliminated model. When Tim delivered this news he quipped "The prophet of doom has returned." Tim Gunn is just not what I expect from a prophet of doom. 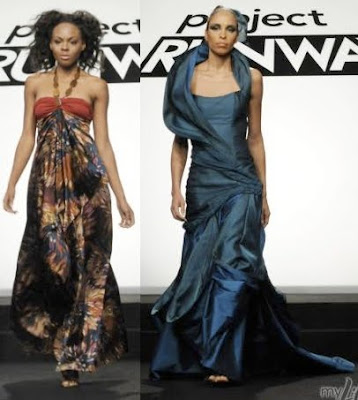 Logan and Christopher: Great team. They really blended their styles to create fabulous clothing. I was surpised they weren't among the designers with the highest scores. 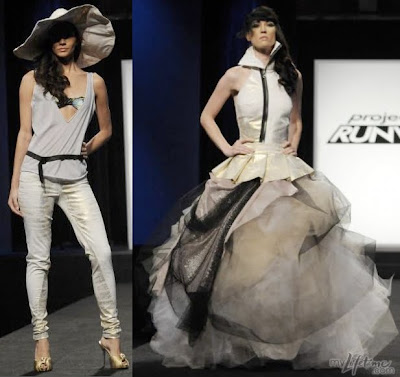 Althea and Louise: These designers made some cute looks. Nothing groundbreaking, but they seemed to work well together. 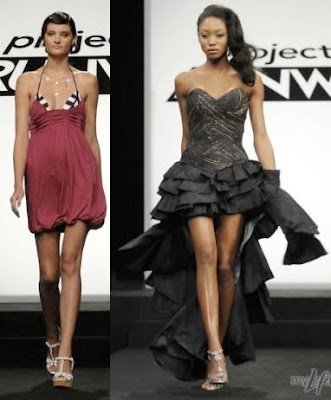 Johnny and Irina: There's a contestant named Irina? Has she appeared on screen at all this season? Johnny certainly has, but he has calmed down and become far less annoying since the first episode. Their designs were nearly the winning looks. Even though Johnny had the last pick and Irina was the last one left, they made a great team and cute clothes. 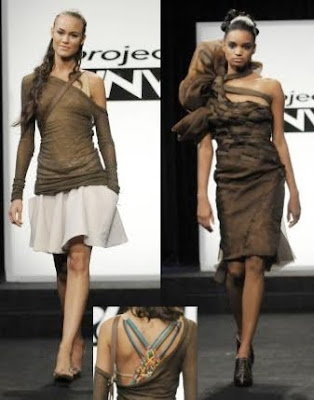 Nicolas and Gordana: Nicolas had a vision and went with it. As a loyal team member, Gordana followed his leader. The judges didn't love it. Aspects of each piece were lovely, but the overall looks fell short. The avant garde look would have been much better with full on lace tights under the skirt or a longer skirt with no bizarre garter things. I was glad neither went home even though they were some of the lowest scoring designers. 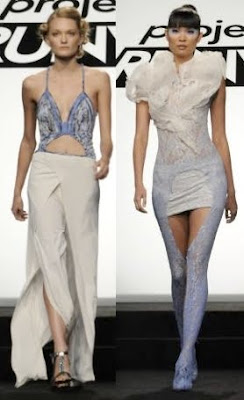 Qristyl and Epperson: This could not have been more of a relationship disaster. I never expected this much drama from these two designers. Qristyl couldn't get a vision together and Epperson couldn't work without one. They bickered for an entire episode. The dress they made wasn't so bad, but the other look was a mess. Qristyl nearly went home (which I sort of expect her to do next week), but both designers survived this challenge. 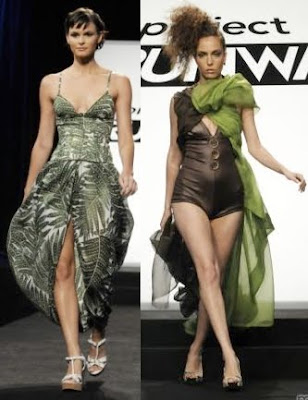 Mitchell and Ra'mon: When Mitchell was named a team leader, everyone who didn't get to be a leader looked terrified. Ra'mon looked less than pleased when he was chosen for the bottom two repeat offender's team. Michtell couldn't focus, sew, or come up with good ideas. He even admitted to choosing Ra'mon to carry him through this challenge. Ra'mon did everything on his own, which is why he quppied "Ladies and gentleman--a capital WTF" when told he would have to make a second look. He actually designed three looks because the wet suit/jump suit idea just wasn't working. Through all this I just kept hoping Ra'mon wouldn't go home and Mitchell would. 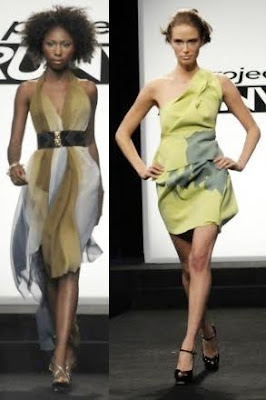 Having not seen much of the vision or any final looks until the runway, I was surprised how well they came out and shocked when the judges named them among the top scoring designs (and a little bummed by the thought of Mitchell staying another week). Ra'mon looked like he was about to cry he was so happy. Mitchell confessed to a very stern Heidi that he didn't do any of the visible work. He only made a bathing suit that Ra'mon had the good sense to cover up. Ra'mon's last minute avant gard look made him the winner of the challenge (I believe he did cry here). And in a Project Runway first, the teammate of the winning designer went home. Goodbye Mitchell! I won't miss you. (However, take it as a consultation that Max Azria thinks you're a nice guy.)

What did you think of the looks and the outcome?
designer Project Runway TV + Film

kylsie said…
I loved the Neoprene dress Ra'Mon did. So fun! And hell yeah, I was thrilled to see Mitchell go too. What a whiner.

I do have to disagree on Nicolas and Gordana's garters/tights. I think those same garters in a non-lace, black, non-see through fabric would be mesmerizing. Difficult to find a place to wear them in the midwest, but drool-worthy.
September 4, 2009 at 3:34 PM

becca said…
kylsie, I didn't think about the garters in a different material. That would be cool. Thankfully, I don't Nicolas will be deterred from trying other crazy things by landing in the bottom group. I look forward to what he might have in store for us.
September 4, 2009 at 4:44 PM

AshLeeTa said…
Okay am I the only one who thinks Althea ripped off Balmain?!!!

also Its been driving me crazy what do you use to stitch your photos together?!
September 4, 2009 at 6:06 PM

becca said…
AshLeeTa, We use GIMP for our photos. It's kind of similar to PhotoShop, but it's free.

Rachel said…
I was a little surprised at the winners. I guess I'm not enough of a fashionista to really understand the appeal of the winning avant garde look.

I LOVED the avant garde gown Logan and Christopher designed though- wow! Definitely a talented team.
September 7, 2009 at 12:44 PM