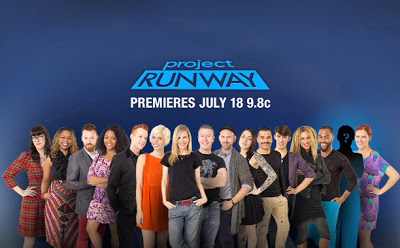 Next week, Project Runway will return for season 12. (Really? Already?) As much as I've loved blogging about the show for the last eight regular seasons and two All Star seasons, I'm still a little burned out from the marathon of Runway seasons we had this past year.

This season, I will be switching up the coverage. Instead of recapping whole episodes, I will be picking a few items to talk about. And instead of posting on Friday or Saturday, I will be posting the following Thursday before the next episode airs. Near the end of the season, I'll be doing more coverage. I will also be posting additional thoughts on our Facebook and Tumblr pages. (In fact you can check out my thoughts on the new NSFW PR promotional photo over on Tumblr right now).

Are there any aspects of my Project Runway posts you want me to keep? Is there anything you'd like me add? Are you looking forward to season 12? (And does anyone know why we still have Zac Posen as a judges and not Michael Kors?)
Project Runway