By becca - March 14, 2013
First, I'm sorry this post is a week late. I was celebrating the birthday of the amazing Jael Paris. It was one of the best weekends ever. Now, on to what could be one of the best Project Runway challenge ideas ever. The designers were greeted on the runway by Heidi and a duck. The duck was meant to represent Duck Brand Duct Tape. The designers would be taking the duct tape prom dress challenge.

This week the designers were switched into different pairs. Out of bitterness for Stanley picking Layana, Richard chose Daniel and stole all the gold duct tape. It turns out, that may have been a favorite.

Stanley and Layana were solidly safe. The dress they made was super duper cute. I really liked that they made a petticoat too. It was a sweet dress with some harder edgier details. I actually thought it could work as a day dress (with or without the bow, but my idea of day attire seems to be a little broader than most). It was cute, and I kind of want it.

Patricia and Samantha ended up together by luck of the draw. They are a bit of an odd couple, but they made it work. Their teamwork paid off earning the top vote from the high school students who got to preview the dress. I actually didn't care for this look. It's fun and a little spacey, but it's not my thing. I do see the appeal though and I'm glad they were able to work together to create something so unique. 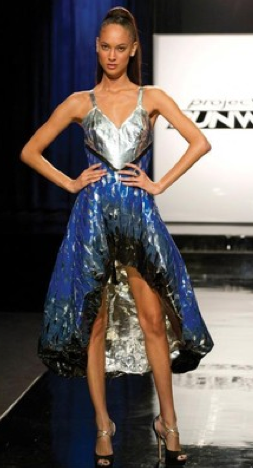 Michelle took a risk and chose Amanda, the designer everyone pegged to go home next. Michelle knew what she was doing though. The two worked togehter very well. They created the punk rock prom queen look that high school me would have totally worn if I would have had senior prom. It rocked. I loved it. I'm so glad it won. Michelle got the individual win, which is much deserved and far too long coming.

Richard and Daniel went for pretty in gold and ended up getting locked in the 80s. The dress they thought was a sure winner was totally dated. I do not know what they were thinking. For me, this was the worst dress.

Kate and Tu ended up as the bottom team. Their dress was terribly boring, but I do think that sort of thing is still a decent seller. If it had had any sort of princess feel it would have leapt ahead, but it was just too dull and old. Kate drove the design even though Tu had a great sketch. In a shocking twist the judges decided to eliminate both Tu and Kate. I actually like this decision. If they are going to work as teams they should win and lose as teams.

What did you think of this challenge? Do you agree with the winner and loser? Did anyone out there make a duct tape prom dress? Send us pictures! Post a link or email info[at]fashionmefabulous[dot]com (be sure to let us know if we can post it on our Twitter/Facebook).
Project Runway

Cait Throop said…
Loved this challenge and I thought it was fun! And I agree with rising or sinking as a team...especially if they pick their partners. Wasn't sad to see either of them go.