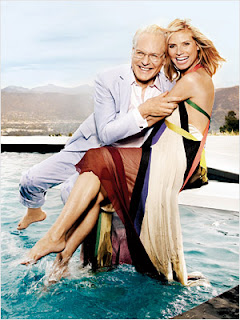 Project Runway: Teams is an interesting concept even though I'm not sold yet. Because the show is on Lifetime, I wouldn't put it past them to keep going with season-long themes so I thought I'd give them a hand by suggesting a few (just in case they're reading).

Project Runway: Dynamic Duos
I really want to see this one. Project Runway could do a casting call for design teams of two. Think Dolce and Gabbana, Costello Tapigliera, Proenza Schouler, DSquared and so on. These are all great design duos. In this set up each duo would work as one designer so there would be a winning and losing set each week. This sounds so fun.

Project Runway All Stars: The Winners
This is probably impossible, but we've had 10 season. We have 10 winners. I would love to see them all compete for the ultimate prize. (It would have to be like a million dollars or something to get them all to do it, but I really love the idea of seeing Christian Siriano, Seth Aaron and Jeffery Sebelia face off against the likes of Wretched Gretchen.)

Project Runway: The Client List
Not that kind of client list--I'm just giving lifetime a tie in and a reason to bring J.Lo Hew on. The entire season would be without models. There would be different clients of all shapes and sizes every week. Plus, we would still have the weekly themes. We could have a celebrity week where everyone gets their own Celebrity client. We could have a wanna-be singer week for the unconventional challenge so the avant garde looks are still fun for the clients. Etc...

Project Runway All Stars: First Eliminated
They could bring back designers that were kicked off the first week of Project Runway. We don't remember most of them so it would feel a bit more like a regular season. It's also be intersting to see how far some of them have come.

Project Runway: Scholarship Edition
This one could be really good or really bad. Open the casting age up to the younger kids-16 and up and offer scholarships to design school instead of regular prizes. Anyone who hasn't completed more than a year of design should would be welcome from the high school hopefuls to the 20-somethings struggling to pay for an enducation to the empty nester ready to finally follow her dreams. The designs would probably be pretty ameteurish, but I think they would be full of ideas, hope and reckless innovation.

Project Runway All Stars: Never Winners
Get together designer who never one a challenge on their season, but may have lasted quite a while. This could actually be quite boring because chances are this is a group that knows how to get by with their looks.

Sereine Magazine said…
I don't know if people would like to see the first ones eliminated make a comeback. I usually can never remember them, and by the time the show ends, the last three standing are those that I can name. I love this show and I follow it very faithfully. That is my favorite reality show.
February 14, 2013 at 12:51 PM