By Jael Paris - February 18, 2013
This year is Oscar de la Renta's 50th year as a designer. I can't imagine working somewhere for half a century, let alone in the cut-throat world of fashion. At 80-years-old, rumors are swirling that this pillar of American fashion may be eying retirement.

Those rumors kicked up to a full storm last month when de la Renta invited his good friend and recovering alcoholic John Galliano to use space in his studio. The designer's reasoning? "Everyone deserves a second chance." Seeing as Galliano's basically been in rehab and tolerance classes for two years since the drunken, racist tirade that got him booted from Dior and his eponymous label, he's certainly been working for it.

All Oscar de la Renta's house will currently admit to is that Galliano is using a corner of their studio and provided input for the Fall/Winter 2013 show. People who were backstage said that Galliano handled all of the styling (and his touch is very clear there), but he also didn't come out at the end of the show. Since both men are famous for their dramatic, romantic dresses, it seems like a good fit. Unlike Dior or any number of big labels, Oscar de la Renta owns his own label. He doesn't have to consult higher-ups or even a board when choosing his successor; the choice is his alone. 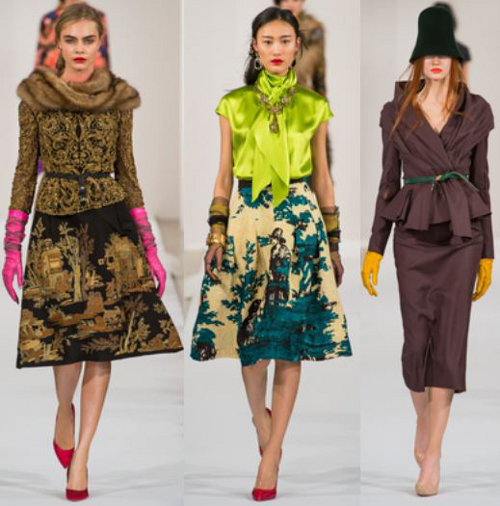 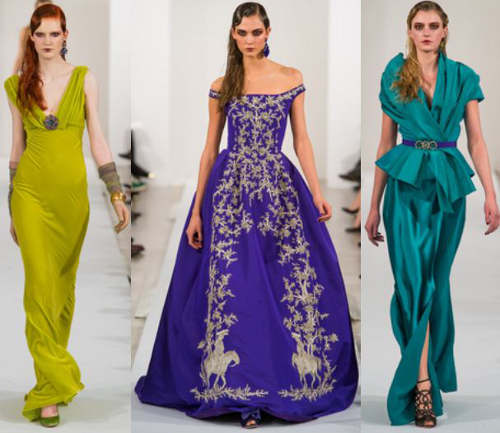 If you want to know more, New York Magazine did a wonderful interview with Oscar de la Renta about Galliano, the birth of American design houses, and why Tennessee Williams is a terrible neighbor.

Traci Marie Wolf said…
I love the colors. John Galliano is not dead to me, everyone makes mistakes. He should perhaps learn to stay quiet if he wants people to forget.
February 18, 2013 at 11:50 PM