Poll: Stuck on You

By Jael Paris - January 03, 2013
As I was searching for makeup ideas for last week's New Year's Eve post, I noticed a lot of glued on bits -- everything from simple lashes and rhinestones to elaborate pearls and foil. Gluing things onto your face is not actually a new practice. During the 18th century, the craze for beauty marks led people to glue dots of velvet or silk moles to their faces. False eyelashes were invented nearly one hundred years ago. Yet, I don't know many women who are glue happy. 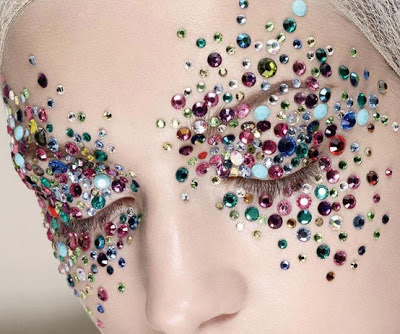 About once or twice a year, I will play with false lashes for a party or wedding. (In truth, I would try to wear them every day, but since I have glasses no one ever notices the effort and I end up rubbing them off.) For several reasons, I doubt I would put rhinestones or beads on my face.