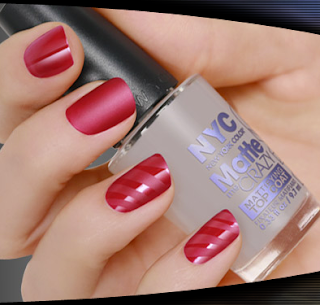 Last year, I tried Revlon's matte nail polish. It looked and felt like suede on my nails, but it scratched off after I did little more than look at it. I tried putting a top coat on it, but it just turned the polish shiny, which I figured. I've noticed the matte polish has mostly vanished from the shelves. I'm sure that's why.

Over the summer, I dicovered NYC's Matte Me Crazy Mattifying Top Coat. At a $1.72 from Target, It didn't seem like too much of a risk so I bought it. Then I totally forgot about it because I got really into a bunch of nail art stuff that I didn't want to ruin by testing a matte top coat. Well, I finally painted my nails a solid color so I tried it.

Actually, I tried it a few weeks ago over an Essie polish that doesn't have any shimmer. The matte top coat just made the polish look dull and faded. It kind of looked like I was trying to see the color through fog. I was bummed and thought that maybe I wouldn't review it at all. But last week, I ran out of my favorite top coat so I tried it again. This time, I tried it over an OPI polish that has a shimmer to it. My nails look frosted! It's a really cool effect.

Usually I re-coat my nails with a top coat every 3 days, but I was worried that would make them cloudy so I didn't. I decided to touch them up and try another coat last night, and they still look nice. I don't think I could do a third coat though. Also, my nails feel cool. You know how some book jackets are glossy with some a matte effect on parts. They feel like that matte part. (I look weird feeling my own nails).

Verdict: Great on shimmer polish. Not great on non-shimmer polish. Holds up pretty well as a top coat. Can be re-coated once, but probably not more than that. Applies easily. Dries a little slowly. (Also, I want to try it striped like it is in this picture I found on the NYC website).

Unknown said…
I love matte top coats. Love their colors and the amazing look they bring to my nails.
January 3, 2013 at 8:11 PM