By becca - August 03, 2012
In this week's Lexus commercial, the designers where taken to meet Tim Gunn and some guy from Lexus where they were told a Lexus would take them to a client for them to dress for the Emmy red carpet. The requirements:
I have a few problems with this challenge. First, Lexus doesn't have the greatest selection of colors. This seemed like a major stretch to incorporate the sponsor for a challenge.  Second, I hate team challenge, especially a challenge with no clear leader or responsible party because that was an issue when it came time to declare a single winner and loser. Third, they only had a day to make one gown. Yes, they had two pairs of hands, but these designers don't know each other yet and had to work with very mixed skill levels and styles. Giving them more time gives us better fashion. This has been a primary complaint of mine for the last two seasons.

I actually loved that the clients were former Runway designers. It was fun to see familiar faces, and the designers couldn't say their clients had unrealistic expectations because all of the clients have been where they are right now.


Top
Gunnar and Kooan
Client: Irina, Season 6 finalist
This an unlikely and odd pairing. Kooan took a backseat to Gunnar because he absolutely no idea how to do an evening look so that helped the pair at least get along even though Gunnar carefully instructed Kooan along the way. Also, Kooan seemed incapable of adding his point of view to this at all. The most difficult part of their challenge was their client, Mean-a Irina. She was awful. Speaking of awful, that's what Gunnar called their white dress. I agree, but the judges thought it was worthy to consider for a win. They just loved it. They called it "stunning," "elegant," sophisticated," and "eye-catching." I'm pretty sure I could drive to David's Bridal right now and buy this dress. Also, the collar isn't a collar. It's a necklace from the Lord & Taylor accessory wall. Blah. I hope the judges don't keep encouraging boring clothes, especially this early in the season. 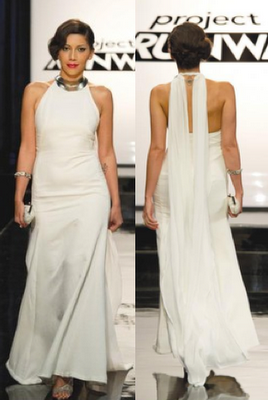 Ven and Fabio
Client: Kenley, Season 5 finalist
This was the winning look. The judges loved that they went short, and they loved the classic style. Because they are more familiar with Ven's work, and this was mostly his design, he took his second win in a row. Don't get me wrong; I love this dress. It's lovely and I would totally wear it. Watching Ven make a dress is an absolute treat. It's just kind of dull where red carpet dresses are concerned--especially red carpet dresses from a fashion design TV show. I can think of everyday occasions where this dress would work for me. I would have worn it to my college graduation or to any number of weddings. I might even wear it to church on Easter or Christmas. It's also a great dress for those times you're invited to dinner at the boss's house or to meet a boyfriend's parents the first time. I'd love to own dress, but I still want a more fashion forward look to represent Runway on the red carpet. 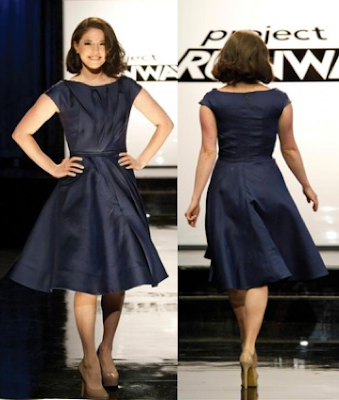 Safe
Buffi and Elena
Client: Laura, Season 3 finalist
These two clearly dreaded working together. Not only do their styles clash, but so do their personalities. Their client was surprising tame considering she's Laura. The dress was sort of cool, but I think their idea for the dress would have been cooler if they could have pulled it off. Some of the details weren't perfect, but the fit seemed qutie nice. I think it would earn a lot of snarky remarks from red carpet commentators, but I'm glad they went for interesting over boring. This was a solid safe look. 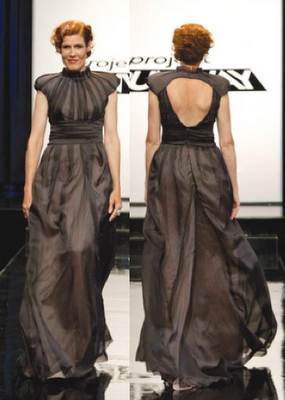 Sonjia and Nathan
Client: Valerie, Season 8 designer
Sonjia couldn't have had a better client for her style. I don't have a good sense of Nathan's style yet, but he seemed to work well in this team. I didn't love the neckline on the dress, or how it fit through the bust and waist. I did love the shoulder detail that came down the back. I liked how it moved, and it clearly made Valerie feel good as she walked the runway. If it had fit a little better, it could have been a top look. 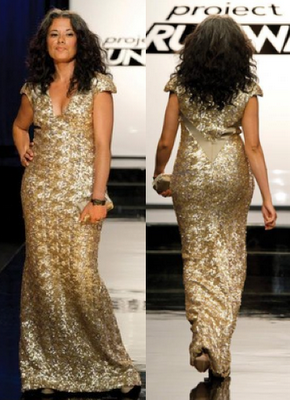 Dmitry and Melissa
Client: April, Season 8 designer
I'm trying to figure out why this wasn't a top look. I really liked it. It fit April's personality perfectly. The front could have used some more finishing, but the back was so so pretty. Dmitry and Melissa were the best pairing of the whole group both in terms of their styles and how they worked together. I'm really proud of them for not doing all black too. Plus, this dress really fit the Lexus challenge because it had this fluid, luxurious, fast feel. I could see it in an ad with a bunch of quick-cut motions shots between it and the silver Lexus. 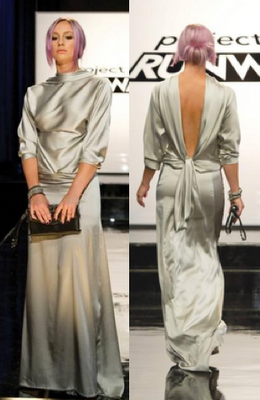 Bottom
Andrea and Christopher
Client: Anya, Season 9 winner
Christopher was excited at first, but things quickly turned ugly. For some reason Andrea just didn't work. Christopher had all of his ideas shot down. She insisted on doing things he didn't think were possible, and she spent most of the design day cutting the skirt (which wasn't cut well). Christopher also wasn't sure how to talk to her. He tried to be kind and respectful, but she really just laughed and blew him off in this flighty, eccentric way. It was so strange. When they got to the runway, the judges called it dated, cliche and old fashioned. Guest Judge, Krysten Ritter compared it to a drug store Halloween costume while Michael Kors said the beautiful Anya looked like a walking Hershey bar. Christopher agreed that it was awful. Andrea sort of agreed. When Christopher tried to explain how wrong everything went, Andrea flat out lied. She denied saying it would be a relief to leave the show. She denied laughing at how wrong everything went. She denied taking a full day to cut a skirt. (Ven took less time and look at his skirt!) She was on camera doing all of those things. I felt so bad for Christopher and almost as bad for Anya getting trapped in that dress. 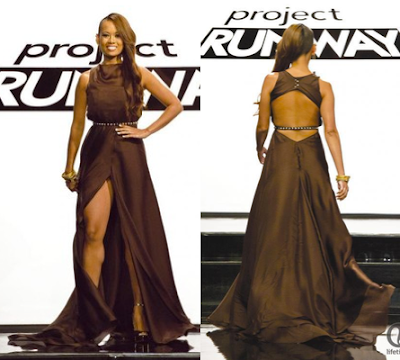 Alicia and Raul
Client: Mila, Season 7 finalist
This was just a disaster. The dress was awful. The styling was really bad. These two are both menswear-inspired designers. They should have made suit. Mila could have totally pulled it off. Instead, they got stuck on the dress idea for a red carpet and totally crashed this Lexus challenge. It was the worst and deserved to lose. The problem was the lack of a clear responsible party. I really don't think it was fair for just Raul to go home. They both did this. Even though I like what Alicia has done so far (which is probably what saved her), I don't know how this was fair at all. 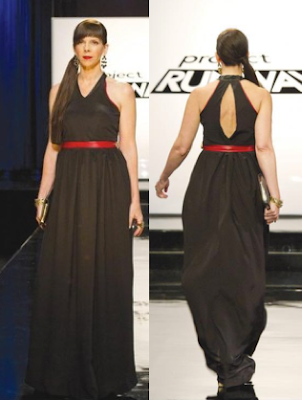 Jennifer Wells said…
I would have liked Melissa/Dmitry's dress better had it been a boatneck. I think that would have made a big difference.
August 4, 2012 at 9:51 AM