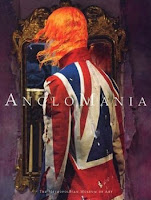 With Queen Elizabeth II's diamond jubilee a couple weekends ago and the upcoming summer Olympics in London (not to mention the constant coverage of Prince William and Kate Middleton), it's a great year for the Brits and those who love them.

I must confess to suffering from a severe case of anglomania. As a child, I read so many British books, I had difficulty spelling in an American fashion. My ipod feeds me a constant stream of Kate Nash, Mumford & Sons and Queen. After consuming all the Doctor Who, Masterpiece Theater and Agatha Christie mysteries available on Netflix, I've started watching a documentary about fifteen centuries of monarchy. While the French have long been hailed for their fashion prowess, it is the British designers who know how to get my heart racing.

In 2006, the Costume Institute's exhibit at the Metropolitan Museum of Art was AngloMania: Tradition and Transgression in British Fashion, the primary focus of which being the romantic ideal of Englishness. As with all of their annual exhibits, they published a commemorative book of the same name. Set in period rooms with murals, art, and furniture pulled from great English houses, AngloMania displayed clothing from the eighteenth century (when Voltire popularized the term) through the modern era on dramatically posed and propped mannequins.
The contrast in the display is striking. Richly embroidered floral dresses from the 1730s paired with Philip Treacy's large orchid hats. A debutant gown from the mid-Victorian era cast as a lady ascending the stairs against the intentionally ragged dresses of Hussein Chalayan displayed as house maids. A gentlemen's club populated with the finest tailored suits, flamboyant dandies and an absolute riot of punks (which, though from the late 70s, looks exactly the same as it does now although the original is more offensive than what's peddled in the mall). Fox hunting attire reimagined decade after decade.
For being an exhibit sponsored by Burberry for their 150th anniversary, there was little Burberry to be seen. Aside from a suit and one stunning coat, the modern end of the exhibit was almost entirely Vivienne Westwood, Malcom McLaren (Westwood's punk collaborator), John Galliano, Alexander McQueen, and Hussein Chalayan with accessories by Philip Treacy, Shaun Leane, and Manolo Blahnik (who I did not know is a British citizen). If you're into fashion, you could determine which designs were whose. If not, you'll have to constantly flip to the back of the book and try to suss from the weak descriptions which lavender silk ballgown is Galliano and which is Westwood.
AngloMania is not the stunning coffee table book that Savage Beauty is, nor is it replete with amazing fashion facts like Extreme Beauty, both published by the Met. However, if you're excited about this Brit-tastic summer, it's a must read.
books MV2012 reviews

Click here for Bear Viewing deals said…
Thank you. I love the old fashions mixed with the trendie and unusal art cosstumes. Bold, exciting ideas for costumers to relish.
November 4, 2016 at 9:57 PM