Project Runway All Stars: Under the Blacklight

By becca - March 02, 2012
Project Runway is known for using some terrible gimmicks in an attempt to make interesting television, which is why I had little hope for this week's light up challenge complete with blacklight runway show. Maybe I should approach the show with low expectations more often, because this week offered up some of the best fashion of the season as well as a surprising win and long-awaited elimination.

The designers were told they had to create a look using technology and innovation by wiring their designs for light. The runway show would take place under a blacklight so we could get the full effect of the lights and neon. Also, Pharrell Williams would be on hand as a guest judge and would use the winning look on one of his artists. The designers began at a lighting store then headed to Mood for fabric. When they returned to the workroom, they found a blacklight room for testing their designs. It was instantly obviously that these looks would either be incredible or terrible--the two best possible outcomes for a Runway challenge.

Top
Mondo was the first designer sent to safety. His look didn't have the usual Mondo punch, which is a bit of a bummer considering how well he works with neon. Georgina thought the tracks of light were too straight so they cancelled out the model's waist. She also thought the look was a little too Tron. Isaac called it a Teletubby and pretended that was a compliment (OK?). With Pharrell judging I couldn't help but imagine which artists would wear each look (whether or not Pharrell actually works with each artist). I see this one on Katy Perry (she's big on boob-centric lighting effects), especially after her recent Grammy performance. 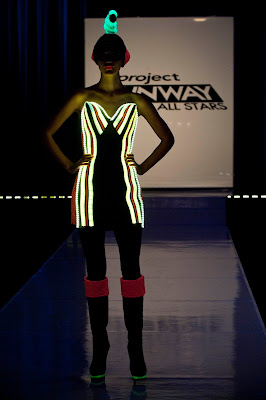 Kenley stepped it up this week. During her season, I really liked Kenley's style when she put forth some effort and didn't just rely on twee little dresses. This look reminded me why. She's great with proportions. She created a basic, cute Kenley dress, but stepped it up by her own plaid print using neon tape. The lattice "jacket" with lights woven through it turned out pretty cool and not too bulking because you could see through it. The wig looked really cool. If you shorten the skirt and add heels that are impossible to walk in, Nikki Minaj would be all over this look. 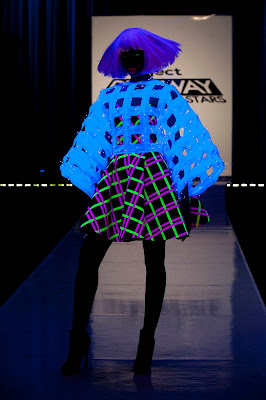 Austin took the win, and I was pleasantly surprised. When I saw Austin's look, I had to agree with Joanna--"part alien, part Elizabethan," but I also had to worry with Joanna--was it too dramatic and pretty for an edgy judge like Pharrell. As we neared the runway, I worried for him because his lights were really just sitting on the dress like a Christmas tree. Once the ethereal dress took to the blacklight runway, it was clear I didn't need to worry. The effect was dream-like and transporting. Even without the blacklights and lighting effects the dress was stunning, which Pharrell observed right away. Since the judges are unpredictable, I though they might punish Austin for not doing neon and not wiring the dress more intricately, but I'm glad they did no such thing. Austin's win was well deserved, and I can't wait to see which artist shows up wearing this dress somewhere. (This didn't photograph that well, watch the episode online). 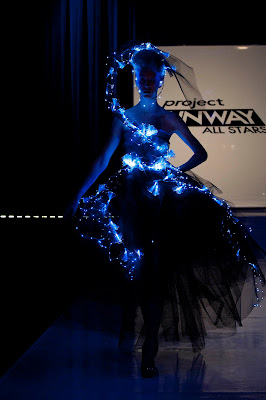 Bottom
Michael was up to his old tricks. I think he created three to six different looks. This may actually be a result of almost all of them smashed together. I think Michael had some really good ideas here, but he lacked editing. He and Joanna discussed that this look, while still in progress, might be very Lady Gaga. I doubt Gaga would wear the finished product, but she has editing issues too so this might be fitting. Pharrell said this look belonged at Comic-con. I agree. Isaac said the flashing lights created way too much noise. I agree there too. I'm glad Michael didn't go home because his look was light years (sorry, puns) better than Jerell's, and I liked the warrior feel. I hope he can pull himself together and learn to design one great look instead of several passable looks next week or he won't be in the finals. 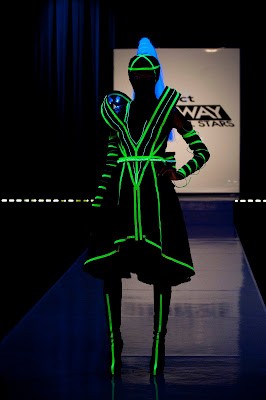 Jerell is out. Finally. In a lesser season, this would have received praise. Thankfully, the judges were all thinking clearly this week and and saw these cheap, costumy and over-simplified "triabl" references for what they were. Angela seemed to think the only problem was the long black skirt Jerell put under the shorter skirt, but Isaac pointed out that several items just looked like they came from a joke shop. Jerell has a strong point of view, and there are people out there who would love to wear his clothes, but I'm sure Nina would say those people have questionable taste. I'm glad Jerell won't be contending for the finals, because it would be a disaster if he made it. 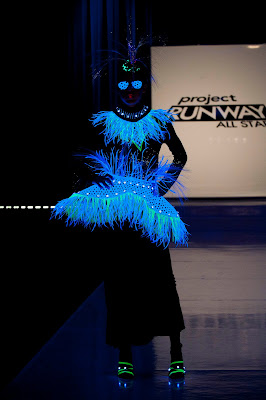 What did you think of the challenge? I originally thought it was cheesy, but I loved the outcome. I also loved Pharrell as a guest judge. He was spot on and dared to disagree with the other judges. (If they do a Project Runway Menswear, he should be a full time judge). Who should make it to the final three next week? I'm thinking it will be Mondo, Austin and Michael, but Kenley is poised to upset either Austin or Michael right now. I'm really sad Rami isn't in this mix. Who do you want to see create a collection?
Project Runway

Anonymous said…
omg SO COOL. i'm gonna go dig up this episode right now and see it for myself :)
xx

Jennifer Wells said…
I tend to be very lenient with the contestants because I myself couldn't design my way out of a cardboard box.
March 4, 2012 at 9:24 PM