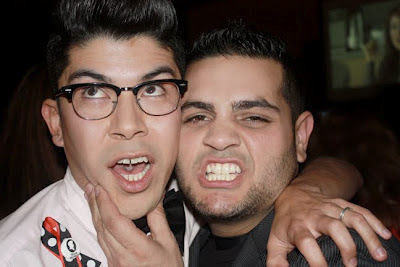 Last night, the roller coaster of Project Runway's All Star season came to an end. Obviously, if you haven't watched it, stop reading and come back when you have. We watched as 13 favorites from seasons past came back to battle for a crazy list of prizes. Let's review those again:
Some Thoughts On The All Star Season
Your average season of Project Runway only earns you the first two prizes on that list so these formerly eliminated designers all had the chance to surpass the winners of their season. After all, this prize wasn't just financing the possibility of creating a collection. This prize puts the winner's collection in a major retailer, allows him to make contacts at a major fashion magazine and furnishes him with an office, computers, and sewing space. Essentially, the winner got a successful business.

This season had amazing talent and amazing prizes, which makes me wonder why they didn't take the time to let the designers make amazing clothing. The entire season was rushed with crazy time restraints. The finalists didn't even get to make a full collection. If Lifetime was hoping to redeem itself for Season 8 (or as I called the finale "The Day Project Runway Died", it shouldn't have rushed things. Lifetime continues to misunderstand why Project Runway was so successful under Bravo's direction--it was a show about fashion design. Lifetime continues to make it a show about fashion designers, drama, crazy challenges and snarky comments from the judges. Sure, big personalities, workroom feuds, creative challenges and quips from Michael Kors were all elements of what made Project Runway a hit in it's Bravo days, but fashion was always the main focus. Until Lifetime figures that out, we're going to continue to miss the show we once knew and loved.

Austin said his collection was the story of "a vampire from the 18th century who has lived many hundreds of years and now lives in Williamsburg and occasionally borrows clothes from her Hasidic dandy friends." Yikes. I agree with the judges that he just had too many ideas. The whole vampire thing seemed tired. He forget to mention the rocker inspiration, and I just couldn't get into it. He is a wonderful designer, and he's made some great stuff. I agree with the judges that he might be the most artistic of the three finalist. I just think he needs to work with a stylist to make this ideas come together better. 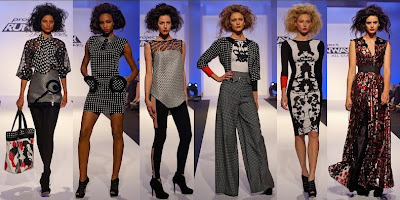 Mondo's collection was cohesive, wearable, interesting and well made. This actually wasn't Mondo's best work of the season, but that is true of each of them in a way. I love his idea of therapy, and he pulled it off well. He didn't just create great looks. He really paid attention to details and fit. He is the master of a bold graphic and a mixed print. He created his own textiles and he used the prints he found in interesting ways.

Michael created the most ready-to-wear collection, which is shocking and commendable given he usually makes gowns, gowns, and more gowns. The judges pointed out several times that these clothes could walk off the rack as they are. That's actually part of the problem though--these clothes are too much like what we already have available. This collection isn't original enough.

The Judging
I usually hate that they bring guest judges on for the final judges. The judges who have been their all season should be the one's to determine the winner. I still believe that the mentor should get to weigh in on this final judging too. Even if Joanna (or Tim in normal seasons) doesn't help make the final decision. The judges should at least talk to them, hear their critiques and consider their picks. This season, Joanna should have been allowed on the panel because she will be working with the winner for a year at Marie Claire. Actually, Nina will be working with the winner so even Nina would have made sense up there (I often complain about her as a judge, but I so missed her this season. She would have been a great foil for Isaac).

I don't mind Ken Downing of Neiman Marcus joining the judges for the same reason Joanna should have been up there. He will have to sell these clothes so it only makes sense that he should get to approve the winner. As much as I wish Joanna had been given his seat, I can't complain too much about Tommy Hilfiger. He was excellent as a judge. Actually, he should be given a regular fashion judge job somewhere. He could have Angela's spot because I never found her opinions very valuable or interesting. She could be reduced to hosting duties (or eliminated, Isaac could host any future All Star seasons).

The judges as a whole did bother me on one main point--they valued cohesion too much. This is how Wretched Gretchen won season 8 over Mondo. Collections should tell a story, but the clothes don't need to look the same. Tommy Hilfiger actually thought Michael should win for being so cohesive. Thankfully, Georgina Chapman was there to say that vision is more important than carrying out an idea. I'm glad Isaac and Georgina wanted the same winner I did so they were able to persuade (in Georgina's case) or bully (In Isaac's case) the rest of the panel into picking him.

Mondo! He deserved the win (I am very biased, so that statement might not be worth much). None of the collections were as good as they could have been considering the time constraints, but Mondo did the best job of creating interesting clothes that told a cohesive story and showed his point of view. Austin was a little too all over the place and because of his crazy ideas some of the clothes looked more like costumes than fashion. Michael's resort collection would sell in bulk but wasn't original enough to win.

I don't normally read other reviews before I publish mine, but today I did. Almost everyone agrees that Mondo was the right choice, but many wrote that they found it hard to cheer for him because of his attitude lately. I would like to disagree. There is nothing wrong with struggling, getting angry, or getting depressed in the process of creating art, especially with so much at stake and so little time. Many thought Mondo rude for leaving dinner last week or closing the door to his workspace, but designers normally get time to take a break and work alone to create a collection. He had every right to confess to being tired, burned out, and irritated by the challenge. Because this took place on reality TV, the camera's looked for his big reactions and edited together any whiny or rude behavior they could find. Contestants should not be required to smile pretty for the cameras while they are trying to do great work.

This entire All Star season sort of felt like a device to make things right after Mondo lost to Gretchen in season 8. Thankfully, Mondo played into the producers dream "script" by actually deserving the win. What did you think of the winner, the collection, the judging and the season in general? Will you be reading Marie Claire this year? Are you excited to see the "signature pieces" and new items Mondo will be creating for Neiman Marcus?

Anonymous said…
I agree that Mondo's work was the best and deserved the win! I also think you're spot on with his "attitude." I applaud Mondo for keeping it together as much as he did. I can't imagine the amount of pressure these guys must've felt.
March 23, 2012 at 5:18 PM

Jennifer Wells said…
I think that reality television sometimes makes people come to the conclusion that everyone should be at their "best" at all times.

Su said…
I'm a Marie Claire subscriber and am hoping Mondo has his own regular column! I'm looking forward to the spread as well!
March 25, 2012 at 6:00 PM

Rachel said…
I am thrilled that Mondo won... I think he's a wonderful designer and consistently creates beautiful, interesting garments. I was actually pretty disappointed in his collection (besides the ink blot dress... LOVE), so I was worried he wouldn't win. Even though his collection wasn't all I hoped for, I have no doubt that he will continue on as a very successful designer :)
March 27, 2012 at 12:42 PM