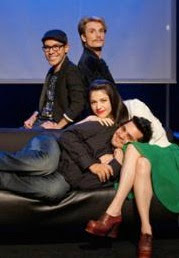 Last night's challenge was both fascinating and rather boring. The designers were asked to create a ready to wear look for Nanette Lepore boutiques. The look not only had to be something people would want to buy off the rack, but it also had to meet pricing standards. This meant each designer had to draw a sketch, which was then appraised for it's approximate selling price. All the costs and profit factors were added up to give the designers a budget for materials. This budget was much lower than I expected. The designers then had to shop from Nanette Lepore's fabric room and only get as much fabric as their budget allowed. There was no room for experimenting or changing directions once they chose fabric.

This whole process fascinated me, but much like the experience of actually shopping in stores, the end results bored me. These clothes didn't pop. The restraints of retail made for a practical challenge, but a dull runway. In spite of the boring clothes, this challenge would be a valuable addition to the regular Project Runway season because a lot of the young designers just out of fashion school could learn a lot from it. I also liked how hands on Nanette was in each step. She really offered the designers a valuable learning experience.

Austin
Price: $500Budget: $65
Austin took a bit of a risk making a coat instead of a dress. It was a smart risk though. A lot of women will seek out designer goods for a wardrobe staple like a great coat. Austin's coat was one of my favorite designs of his this season. There was nothing funny or odd going on. He made something truly and classically beautiful. The color was great, the concept was even better. Sadly, the budget tripped him up. He ended up choosing a fabric that didn't quite work for his design. It looked rumpled and wrinkled instead of crisp and vibrant. However, the concept earned Austin a spot on the final challenge even though the execution cost him a win. 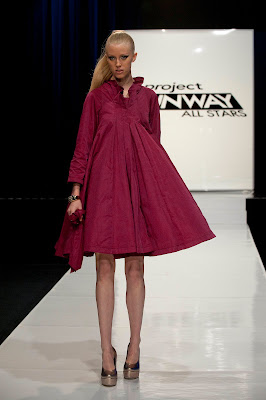 Mondo
Price: $300Budget: $32
With the lowest price, Mondo suffered from the lowest budget. He also suffered from a great deal of anxiety over his lack of sketching skills. I find it comforting that such a talented designer can draw (my stick people look like a 2-year-old drew them, but there must be hope for my sewing abilities), but it freaked him out to show such a rudimentary sketch for a designer like Nanette Lepore. After a lot of self-loathing, Mondo pulled it together. He played to his strengths using color and print to make a basic sundress. The judges loved his design and color story but they didn't care for the styling and the boxy shape of the dress. I also wish this had more of a waist. Actually, I wish it were a bit longer and had a tie-belt drop waist--my favorite shape for summer. The minor critiques didn't hold the judges back from giving Mondo the win. I do think his dress was the most deserving. And I'm always happy to see Mondo win. (Like I hope he wins the whole season). 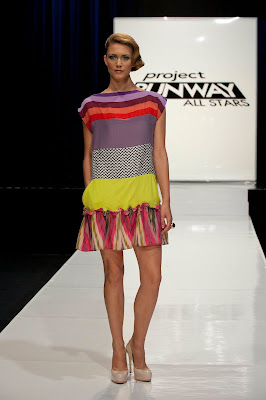 Michael
Price: $380
Budget: $48
I'm proud of Michael on several levels this week. He did one design and followed through with it. I think he needs to do this more often because his finished product was beautifully made. This dress wouldn't have looked half as good as it did without the attention he gave to every detail. He also used a print, which is not something Michael often uses. Without the print, the dress would have been quite dull. The judges liked it, but they didn't think it was very wearable. This brings me to the third thing I liked--Michael still put on a runway show. He knew the dress would look more dramatic longer and could be shortened for retail. Of course, the women on the judging panel all wanted to wear a bra with it (I agree, this is problem with too many dresses), and I'm not sure Michael is capable of bra-friendly clothing. My primary criticism is that the dress looks like Target remade JLo's green Grammy dress. I'm just glad Michael didn't go home. He did mostly good work this season and I want to see what else he is capable of. 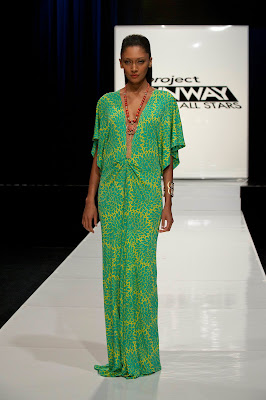 Kenley
Price: $350
Budget: $41
Kenley knew how this game would play out. She said she had done this whole pricing thing before. She created a very Kenley dress design, but Nanette liked it. Kenley forgot all about her design when she fell in love with a cute peacock print. I love the print too, but I don't love how it worked with her design. Kenley then made three big mistakes. First, she didn't line up her print at the seams. Second, she dropped the keyhole part of her original design because the print didn't work with it. Third and most important, she didn't listen to Nanette and Joanna's critiques in the workroom. Kenley has been a brat in the workroom before. She went so far to snap at Tim Gunn during her season. This time though, Nanette appeared both in the workroom and on the judging panel. She was clearly turned off by Kenley's attitude. Kenley's dress did look a bit frumpy because she refused to fit it close to the body, but I don't think her design was much worse than any of the others. Her attitude cost her the challenge. Also, I think I can buy that dress from Modcloth, which is what I say about most of Kenley clothes (and what makes her redundant as a designer). I was glad to see her go home instead of Michael. 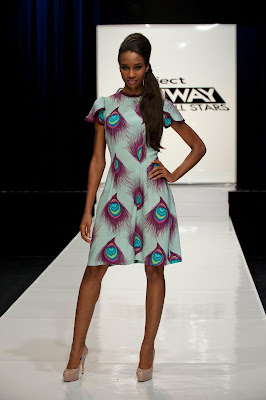 What did you think of this challenge and the clothes? Do you still wish Rami was competing for one of these top spots? Do you think the right three made it through?

It's still unclear what sort of final challenge the designers will face. The teasers are a bit vague, but I'm looking forward to whatever it is. I'm also pulling for Mondo to win. Who is your pick for All Star winner?
Photo Credit: Barbara Nitke/Lifetime

Rachel said…
What did you think of this challenge and the clothes? I agree that it wasn't the most exciting challenge ever... I think it may have worked better earlier in the season.

Do you still wish Rami was competing for one of these top spots? Yes...I was shocked when he was eliminated so early.

Do you think the right three made it through? Yes. I think Kenley makes super cute dresses and I'd love to own one, but they're all the same. One trick pony.

My pick for the winner: MONDO. Like Isaac said last week, Mondo never makes anything that isn't good. I love Austin though (purely on personality), so I wouldn't be too sad if he won. I'm a bit bored of Michael C.
March 10, 2012 at 4:09 PM

I'm a bit bored with Michael C. too. I totally want Mondo to win, but I want lifetime to put Austin back on another reality show. His personality worked great for that.

Catie,
Mylifetime.com has full episodes so you can watch it there. I do think the dress looked better in motion, also the colors looked different on TV. It wasn't one of his best dresses though.
March 11, 2012 at 2:30 PM