By Jael Paris - February 01, 2012
Armani Prive is usually one of my favorite couture shows, but this..? If the fabric isn't overly shiny and cheap-looking (for the third season) then the print photographs terribly. The pic factor shouldn't be an issue for a designer, except these clothes need to appeal to both fashion editors, celebrities, and rich women who will be photographed for the society pages. So while the colors are great and I enjoy the overall reptilian vibe and accessories, this show is a miss for me. 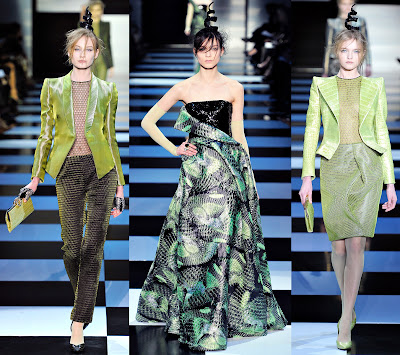 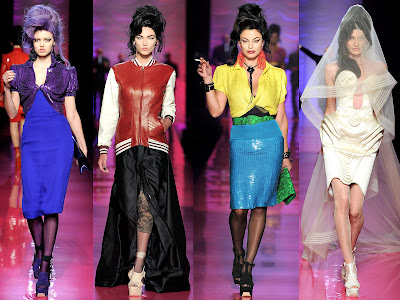 I looked at all the outfits in all the couture shows and there's little to stir the imagination. (Givenchy may be nice, but I can't tell from the photos.) These are dark fashion times. Thankfully, I tripped across Flip-Zone the other day. Not only do they cover many designers whose work you've seen (like Zuhair Murhad and Nicolas Jebran) but they also cover independent designers and those whose main markets are Asia and the Middle East. If you want the really fun stuff, head to Flip-Zone for a an evening lost in fabric fantasy. If you want a recap of what's pretty but not memorable from Paris' major shows, go to our facebook page.