By becca - February 27, 2012
Last week, Jael gave us her annual fashion picks for top Oscar nominees. Now that we know what they actually wore, we're putting it to a vote. Who picked better? Us or them?

Rooney Mara told Ryan Seacrest that this Givenchy Couture was chosen yesterday morning. I can't imagine picking an Oscar dress was easy for her. I'm sure so many designers were vying for her to wear their gowns, and it was her first big Oscar night. I kind of like her dress. I certainly like it a lot less in photos than I did on television. The detail and movement are lost in the pictures. I like our picks for her better. I especially would have loved to see her in a color. What do you think? 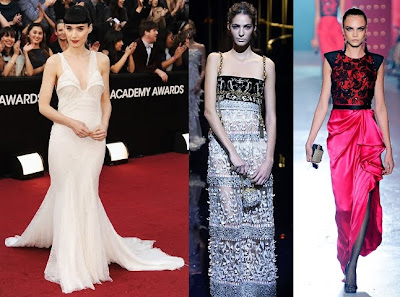 poll by twiigs.com
Michelle Williams looked darling in her coral (I know if looks reddish in most photos, but it's coral) Louis Vuitton dress. I really liked it. It's hard to pull off all those ruffles. Jael was hoping for a big ball gown, and I think the Oscars are certainly missing that. However, Michelle ended up in one of my favorite dresses of the night, and she didn't wear anything with a crew neck or neutral color so we can't complain. Do you like it? Where you hoping for more? 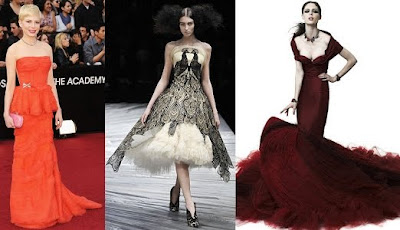 poll by twiigs.com
Jessica Chastain looked lovely Alexander McQueen. She certainly didn't misstep after making a splash last year in not 1 but 6 films. I like her dress and our options here. I think she did a good job of making sure we won't forget her. What do you think? 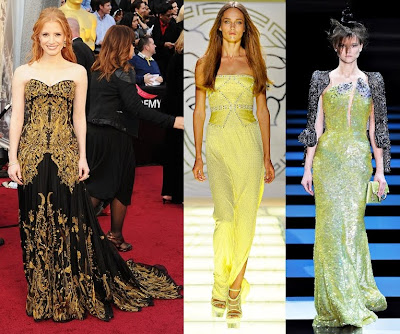 poll by twiigs.com
We thought it might be interesting to see Glenn Close in a suit, which she sort of wore by pairing a matching jacket with her Zac Posen gown. Maybe she figured a suit would have been too obvious after staring in Albert Nobbs so she only went halfway. I think she totally pulls it off even though seeing her fully commit to an interesting gown or stunning suit might have made for a more lasting red carpet moment. How do you feel about the jacket and gown? 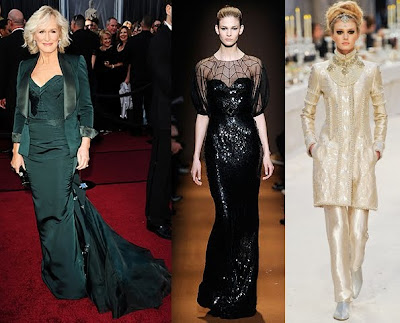 Bronnie said…
I think that Glen Close looks AWESOME! Everything worked and her hair looks great.
February 27, 2012 at 7:05 PM