Project Runway All Stars On Broadway 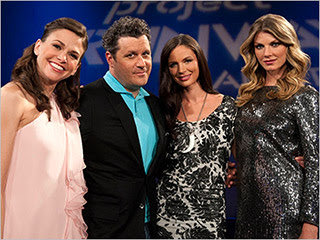 Last week I was starting to wonder if all the fashion people in Runway world had started speaking a new language and I missed the memo. I was confused. This week, the judges either got over their brain poisoning from last week or I learned the new language without noticing. This challenge made a lot more sense and so did the winners and losers. Also, I was actually able to distinguish which looks the judges liked and disliked by how they talked about them. This is a good sign.

The designers were herded to Broadway and admitted to a theater about to stage a revival of Godspell. Here our All Stars received the challenge to create a look for the rich woman character. The look has to have a lot of pieces because putting it on is part of the production. The look had to scream wealth but have a vintage feel too it as well. It also had the fit the ostentatious character who loved showing off her wealth. Then, after a little sketching, they headed to Mood with $200 for fabrics.

Safe
Jerell was safe. He certainly tried, but the look came off frumpy and mumsy. The look was too old and stuffy. This landed him in a safe spot.

Top Three
Michael's look was fun. I liked the shape and the colors, but it was a little too wearable. This was supposed to be a stage costume, but the hat was the most eccentric part. I agree with the judges (whoa!) that it just needed a bit more.

Austin created a look that could have taken the win (although it was my second favorite of the night). I love the fabric he found. When Joanna saw it she said "I love how it straddles the line of hideous and fabulous. Right now it's hideous but you're going to turn it into something fabulous, right?" I adore Joanna. And I think he reached fabulous. 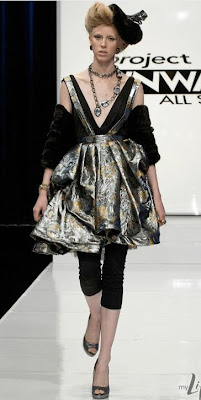 Mondo took the win. This is the Mondo I've been waiting for. He had to get pretty depressed to get to this point, but once he did, he made something awesome. (I hate to cheer for sad Mondo, but I like the clothes he makes). The judges loved it. (Except maybe Isaac. I can't tell. He makes no sense to me). I think it really fit the character and the vibe they were going for. 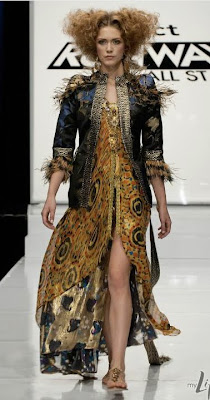 Bottom Three
Kenley's look was so very close. When listening to the challenge she seems to have heard the words "vintage" and "ostentatious" while missing the word "rich" because this look was not fancy enough.

Mila lost her way completely. This woman doesn't too over the top. She does sleek, geometric stuff. (But she used to design for Dancing with the Stars so she must have crazy in there somewhere). She was going to do a maxi skirt, but she talked to Joanna about the power of pencil skirts and went that route. Sadly, she took a sharp turn at Russian Hooker.

Kara was the one who walked her last runway though. Isaac gave the backhanded compliment of the night when he said this was her best work so far right before eliminating her. I expected more from Kara in the season, but I have no problem with her going home now. She should have left last week. The bow was too big and distracting. The stole was just a big hunk of faux fur. The pencil skirt wasn't even well made despite the nice pop of color it provided..

What did you think? Are you cool with the winner and loser? Did you spend the commercial breaks wondering what awesomeness Rami would have created? Also, are you ready for the trip to the UN next week where Isaac gets Communism from a dress?
Project Runway