Project Runway All Stars: Take Off Your Clothes 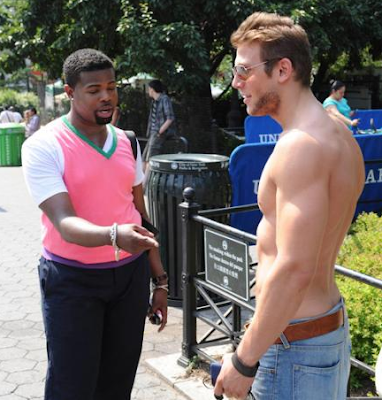 Last night's challenge may have been the most awkward one in Runway history. The designers were taken to Central Park and instructed to find a muse. Not only would they have to approach random people to be their muses, but they would also be forced to ask for their clothing so they could make at least 50 percent of their look from it. All they had to give in return is maybe some of their $150 budget (but they needed that for other fabric too) and a white t-shirt. If I was wearing something cute enough to be considering inspiring, I would never give it to a random reality TV star. Sorry. Also, it was unfortunately summer so people weren't wearing a lot of fabric. This would work better in the fall. Anthony did a good job of getting a lot of fabric (he even got a shirtless man's shorts). But everyone else struggled. It was pretty painful to watch. I hope they don't do this again.

Our guest just this week was hockey player turned Vogue intern, Sean Avery. He mostly grunted opinions and was sort of worthless (save one line we will discuss later). I'm not sure this is an OK follow up to judges like DvF. This all star season can get much better fashion people.

Safe
All of the girl were safe this week. Kara did a pretty good job taking inspiration from her muse, but I didn't really love anything about the look. The styling wasn't great either.

I'm a bit confused by Kenley's dress. I like the graphic nature of it. I could see it in a cutsey retro music video (maybe with the just the boob panels or pocket panels--not both). It's better than a lot of what Kenley has done. But it still missed for me. Maybe it's too safe. Maybe I just find Kenley too irritating.

Mila was so close to awesome this week. The pants are cool, but the whole look just seems too generic. That girl is everywhere. I can get most of the elements of this look at any Target, Kohl's, Forever 21, H&M, or mid-price department store around. If she had just stepped it up a little she could have landed a top spot.

Top
Rami nabbed a top slot with his very chic shorts suit. I loved it. I have no idea why the judges were complaining about the hat. The hat was fun. Also, the shorts were a real-life wearable length. Thank you, Rami! I love that he did a menswear inspired look that came out so feminine. He didn't really channel his muse much, and I'm not sure he used enough fabric from the street (but I guess the judges don't mind how well you follow rules if they like your look).

Austin also landed a top slot it what I think is his best look yet. He found this really cute punk girl who actually gave him her clothes. I assume she knew who he was because his look is a bit creepy lately--especially when you consider he was running around asking young women if he could take their picture and their clothing. If Nina had been there she would have pointed out that this didn't look expensive. I think that's what kept it from winning. It was super cute, but a little low-end looking. He did one of the best jobs of channeling his muse though.

Mondo won! Woot! Go, Mondo! He deserved it. He created a very cool, upscale look based on his muse. The graphic shorts were fun and very well made. The jacket was super cute and the bra/bikini top really worked with the vibe. The judges all loved it. Although Isaac stupidly complained that it was "too stylish" because I woman couldn't make it her own off the runway. First of all, he's wrong. Second of all, how is something "too stylish"? This look has three seperate pieces, I'm can think of a variety of ways I would switch up the jacket and shorts with other things. (I don't see me rocking the bikini/bra top a clothing personally).

Bottom
Jerrell. OK. Where to start? Hockey player Vogue intern guest judge, Sean Avery, gave his only good critique of the night when he said this looked like "Lady Gaga and Gwen Stefani at Burning Man on acid." Yes. That is exactly what this looks like. If Nina had been there she would have had Jerrell escorted from the building because of his questionable taste level (I didn't expect to miss Nina so much. I really miss her). I appreciate risk taking. I guess the judges do to because he was safe. But this had way too much going on. (I do really like the shoulders though. Just the shoulders. Nothing else). I also felt bad for the model because Isaac said her "big stomach" was too much. He meant too much exposed stomach. Thankfully, Avery called him out for poor choice of words.

I have no idea what happened to Michael this week. This was bad. If the judges didn't love him, and he hadn't won so much, I think he would have gone home. Those are not shorts. That top is not OK. The belt doesn't really make sense, but I have a feeling it is holding the look together--literally, like the top and shorts would fall down without it. I don't understand. I hope he regains fashion consciousness next week and confesses he was suffering from some sort of short term insanity.

Anthony did the best collecting lot of fabric from people, but he forgot to use it in his look. The judges decided that meant he deserved to go home. I actually think a lot of the designers used more purchased fabric than street fabric. However, it bothered me that the print he got from the woman who was supposed to be his mused just turned into a clutch. He could have made a top or a jacket or anything really. His actual look, though boring, was better than what Michael and Jerrell showed. I'm really sad to see Anthony go--not for his design potential but for his entertainment value. I'm also unsure if he deserved to go.

What did you think of this challenge? Did Anthony deserve to go? Will you miss him? What happened to Michael? Why, Jerrell, why?
Project Runway

Elizabeth said…
I think Jerrell's look was one of the worst I've seen in Project Runway history. I was so upset he didn't go home. It was a train wreck from head to toe. I kinda liked Anthony's look, but I was also disappointed that he didn't use the jacket it looked like he had made earlier in the show. Had he not been in the bottom last week, I think they could have overlooked his technically less than 50% look.
February 5, 2012 at 11:51 PM