By becca - February 09, 2012
Last night, our All Stars were subjected to a seasonal fashion face off. I hate these. First, they amp up drama by making the designers compete head to head. Second, this means the winner of each pair is safe from elimination so if two looks for one pair were great, one of them has to be in the bottom. This isn't how it should work. Best looks in the top. Worst in the bottom. Anyway, the eight designers were assigned two to each of four seasons and instructed to create a weekend getaway look.

Because of this stupid challenge requirement and Isaac's bullying, Mondo, Rami, Austin and Michael were the bottom four designers last night. Read that list again. What is going on? This means the top four contained Kara, Kenley, Mila and Jerrell. Kara. Seriously?

The Designs
Austin and Kara wend head to head on Spring. Austin's look was perfectly made. He tried to be fashion forward with the high waisted crop pants, but his granny-goes-to-church sweater set held him back. A slight shift in proportions and a different pattern or color (or even less matchy matchiness) on top could have made this rather cool. Kara's look was utterly boring and unoriginal. It wasn't even well-made. Yet it was very "wearable." (Please stop using that word, judges). I was actually able to find almost the exact cardigan, top and pants at Dress Barn, a store I rarely think of as "fashion forward." Since Austin's look was off, they decided Kara took the top spot. If this hadn't been a head to head though, I think Kara would have gone home for being boring. Instead, she was in the top. 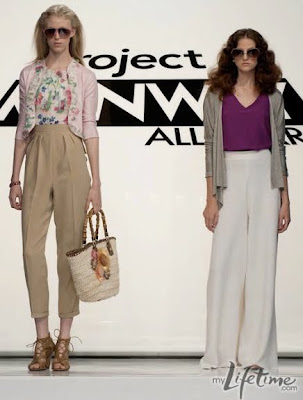 Kenley and Mondo tackled summer. When I saw Kenley's romper I wrote: "Instant hipster, just add ironic glasses." Beyond Katy Perry and Zooey Deschanel, hipsters are the only grown women I can imagine in this romper. It's too twee. I think I wore it when I was four. The judges loved it though. They thought making "one piece" sportswear was "original." Angela said she would wear it, which is a lie. Surprisingly, it was Mondo's look the judges called "junior." It wasn't his best work, and it wasn't as good as last week's shorts look. However, the separates were "wearable" (since they used that word so much this week). And I thought it was a far more likely choice for adults to wear. Nonetheless, Mondo landed in the bottom while Kenley nearly snatched a win. 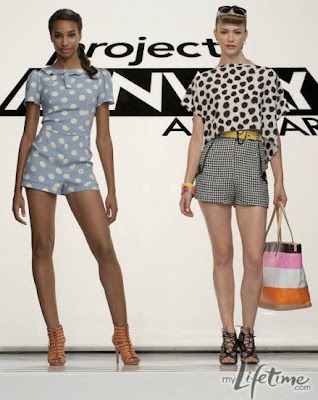 Mila and Rami got ready for jacket weather with their fall looks. Mila grabbed the top spot for her color block cape, basic red tee and jeans that fit well but only had awkward ankle zipper embellishments to make them unique. Rami offered a really cool jacket and equally well made pants. Sadly he didn't go for a boring tee underneath like Mila did. He chose an unfortunate green fabric and tortured it. It was bad, but I thought the jacket made up for it. The judges didn't and sent him home. He went home for that jacket--so sad. Mila's look was nice. I don't' really mind that it was in the top, but it wasn't anything fun or exciting. (OK, so I guess I do mind it in the top--it's safe at best). 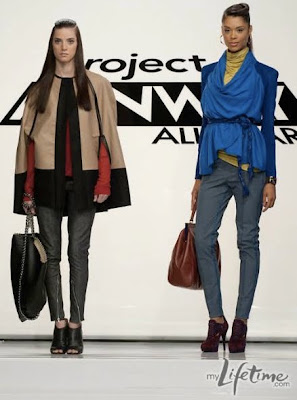 Jerrell and Michael created a downright icy working environment for winter. Jerrell accused Michael of copying his jacket. It was too much drama, and I don't even care. Joanna settled it with a "may the best design win," but Jerrell wouldn't let go. This was actually the best of the four seasons. I do think Jerrell had the better look. You can't see the cool cardigan underneath here, but it had big double buttons and I want it. Isaac hated the buttons but somehow got over it to give Jerrell the win. Michael also created a pretty good look considering he doesn't do sportswear or winter very well. The judges said Michael's look seemed like the mother version of Jerrell's. I agree. Michael's did have an older "ski lodge in Aspen" feel while Jerrell's seemed like an Urbanite who was supposed to be vacationing in the Alps but took a train to some shopping instead. I think Jerrell's win was the only thing right about this episode. 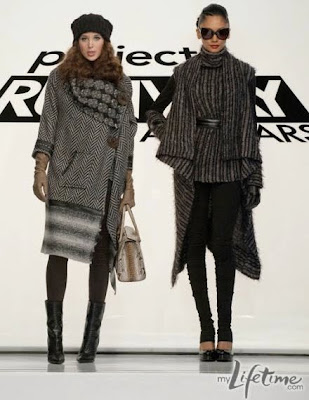 As I said, I hate that this was a fashion face-off. It caused them to evaluate the looks based only on the other look in the category. Austin's look may have normally landed in the bottom anyway, but Kara's would have too. And Kara would have gone home for being very boring and Austin would have been safe because Isaac said his pants were the best part of the show.

Which brings me to problems two and three. Problem number two is Isaac. He is a bully and the other judges take it. If he likes something hideous (like Mila's milk & sour cherries dress), everyone decides it wasn't so bad after all. If he hates something cute (like Jerrell's buttons), the other judges stop saying how much they like it. I miss Nina. She would be questioning Isaac's taste level and kicking him when he tried to bully the panel.

Problem number three is the judges inability to decide what they like and dislike. They often confuse me by disliking the very things they picked as top looks or liking the things they put in the bottom. Sometimes they act like someone else picked the top and bottom looks for them and asked them to pick the best and worse respectively. Also, they aren't as bold as our original panel. Heidi, Michael and Nina have thrown out rules before like that time there was a team challenge and teams were supposed to win or lose, but they threw that out and picked a winner and loser from the same team because that's what should have happened. These judges could have done that last night, but they didn't. It would have even made for a good twist so I'm sure the producers would have allowed it.

What did you think of this episode? Who should have gone home? Did Rami really deserve it? How did Rami go before Kara? Doesn't designing out of the Dress Barn catalog earn as least a scolding? Why were the people I expected to see as finalists all in the bottom?
Project Runway

Janiemania said…
Rami's demise was way premature. That's simply wrong. Kara? WTF. Kenley's romper was ridorkulous. Cynthia Rowley - whose designs I really like usually -- was too snarky. Austin's model looked like Austin, but I didn't think his look was as off as the judges seemed to think. Jerrell's win was deserved. I just don't see how Kara is still on the show.
February 10, 2012 at 8:56 PM