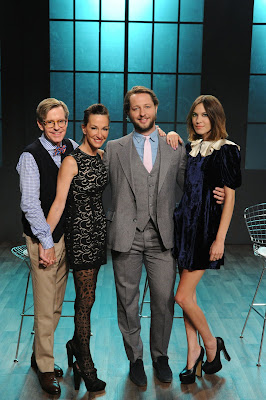 After the premiere of Project Runway All Stars, Lifetime offered a "sneak peak" episode of their new fashion show, 24 Hour Catwalk, which premieres in it's regular time slot tonight. The previews of the show weren't at all clear how this 24 hour premise would work. It turns out the show is a little like the cooking competition show, Chopped, on the Food Network. Four different designers compete in each episode. During round one, the designer pull something out of a trunk that dictates their first mini challenge. They have a few hours to create a look on a dress form. The judges then eliminate two designers. The remaining designers compete in round two where they must create three-piece collection in just 24 hours.

Round two feels more like Iron Chef because they get help, a bit more time, and have to prepare a three-course meal. They once again open the trunks to reveal the "secret ingredient" that must be used to inspire their collections. Each designer works with three sous chefs professional sewers to help them make their collections. There is then a runway show with an audience. The judges deliberate and a winner is chosen.

The Pros: It's fast fashion, and kind of a fun ride. You don't have to commit to a whole season of Project Runway. Villains and heroes are picked early on. There is more room for wacky designers who could never make a season-long stint on Runway. The fashion is a little weird and funky. The judging panel is pretty impressive. There will probably be some cool DIY ideas along the way. Also, I can't wait for the show to run out of ideas so we have to see people make clothes out of canned tuna and Jessica Simpson's hair extensions (yes this is a pro, I want to see someone attempt that).

The Cons: The fashion probably won't ever be all that amazing or relevant because it's created so quickly with potentially more and more bizarre "secret ingredients." The professional sewers are allowed to express opinions and get mad about time constraints. This amps up drama, but we never hear a peep from sous chefs on Iron Chef, and I don't really want to hear from sewers. It should be about the designer and the fashion. The impressive judging panel didn't make a lasting impression on me at all. For such an action packed show, it already dragged several times in it's first hour. Not a good sign.

Most restaurants are going to sell you an appetizer created in 2o minutes from watermelon, canned sardines, pepper jack cheese, and zucchini, even if it did taste good on Chopped. And most chefs can't express their point of view with those foods. Still, it's fun to watch. This fashion probably won't show up anywhere, but it may inspire a designer to try new things and could be fun to watch once it gels as a show.

Did you watch 24 Hour Catwalk? What did you think? Will you be tuning in tonight?
reviews TV + Film