The second episode of All Stars wasn't as excellent as the first, but I'm going to blame the producers, not the designers. Actually the designers did amazing things considering the challenge. The designer were challenged by Badgley and Mischka themselves to create a courture-esque opera look. They were given $350, which is a bit low compared to what "couture" challenges have received in the past, but the real budget cut was in the production time--24 hours. Resident gown-maker and high society expert, Austin, explained how impossible this was to the camera and spent the whole challenge looking like he would have to walk the plank after the runway show.

Kenley and Jerrell made my two least favorite safe looks. No one would wear Kenley's pink puff confection to the opera. To prom, to a deb ball, to a Miss Teen pageant, to a Barbie-themed costume party, this dress would make more sense. It's pretty, but I don't think it has the drama or sophistication this challenge was calling for. I can actually see Jerrell's dress at the opera. It would be worn by an eccentric old society woman who lounges around her house in mumus and turbans. She dump her dowdy day clothes for this feathery evening version and a big ole hat. I'm fairly certain that's not the customer the judges had in mind. 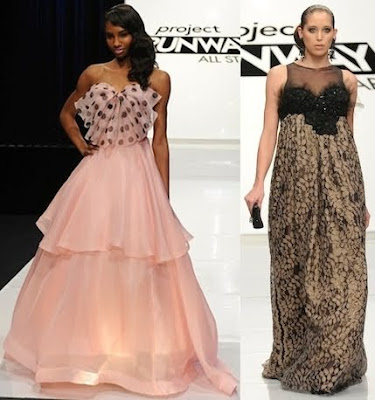 Gordana and Rami were two designers who may have benefited the most from more time. They both had really cool ideas. Gordana's dress looked like something Charleize Theron might have worn if Gordana had a chance to finish it. She's an amazing dress maker, so The unfinished details just show how ridiculous the time constraints were. Rami had a cool idea too with the triangles, but it looks rushed. I wish they had been given two days at least. 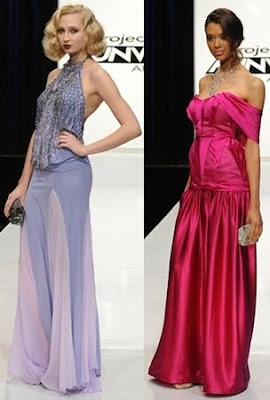 Mila and Mondo made my favorite of the safe designs. Mila's didn't quite fullfill the challlenge. I don't see this going to the opera. I do see it on a red carpet though. It looked very cool and even moved well. I actually expected Mondo's dress to be in the top. If Holly Golightly met the Jetson, this is what she would have worn. I love it. I don't usually love a short dress with a tacked on train, but I liked out this came together. 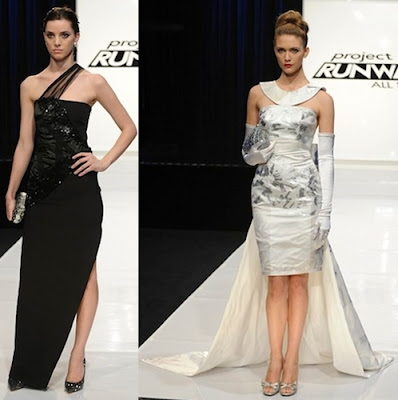 The Top three
Anthony. I adore Anthony. Everything he says in funny, even if the words he's saying aren't funny. During his consult with Joanna Coles, she worried that making a gown out of white would be too bridal. Anthony assured her that he was adding edge with a plunging neckline. I worried when I saw he was draping the white that the whole thing would look like a toga. Joanna and I didn't need to worry. It turned out great. The only negative the judges gave him was for his slightly vampy styling. I also love Anthony's confidence. He knew white was a risk, but did it anyway. Even Joanna's warning didn't worry him. He had a vision, and he went for it.

Michael annoyed me a bit when he threw a fit that April was going to do red just like he had planned. Well, he should thank her because switching to this lovely black matte jersey was the best thing he could have done. I am still surprised this didn't win. It was stunning. The construction was amazing for time constraints.

Austin won, and I have mixed feelings about that. I'm not sure his dress was as great as Isaac and Badgley Mischka thought. The gold lamé looked lovely in motions, but it looked wrinkled when it was still. The tulle kept shifting, which the judges even pointed out and allowed Austin to fix. I do think he created an opera-ready, high society style dress. It was probably the most likely to make a trip to the Oscars. I also think it would have popped more if he had been given more time. I think Michael was the winner of this challenge. As much as I'm cheering for Austin, I don't think this was his best work. 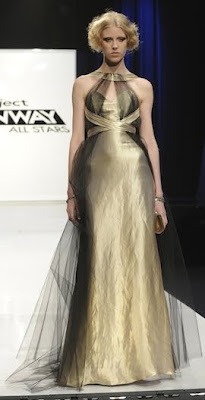 The Bottom Three
Kara landed her self in the bottom three with this generic dress in a risky print. I like that she took a risk with a print, but I wish she would have taken a risk with the design (although, again time was not on her side). She deserved the bottom spot. I've seen that dress shape a thousand times. It also felt too junior for the opera.

April's attempt as a red queen corpse bride (I love Tim Burton too, but come on) had the judges as confused as Johnny Depp's mad hatter. I applaud April for trying out color. Sadly Badgley and Mischka hate black and red together, which I like when done right. April didn't do it right. Dying anything on that short of a time schedule was a bad idea and came out looking like it. The dress looked tortured, and so did the model who was wearing it. (Although it photographed better than it looked on TV).

Sweet P is gone. I really like Sweet P. She has a fun and funky vibe. I also just like her as a character on the show. I'm sad to see her go, but neither of the dresses she's made have been good enough make me think she should stay any longer. Her dress was not an evening gown. The judges said the ill-fitting bodice looked like a bad retro bathing suit. Even if this had been re-envisioned as a maxi dress, it would have been a typical and sort of boring one. I'm sad she's gone, but she deserved to go.

What did you think of the loser and the winner? Who's look was your favorite this week? Are you excited about Miss Piggy joining us next week?!
Project Runway