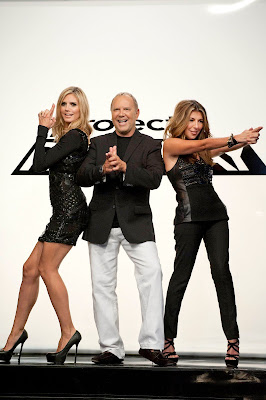 For the final challenge of the season Tim whisked the designers off to Govener's Island for inspiration. They were given golf carts and time to explore before heading off to Mood with a $500 budget and the quest to create a three look collection that showed their range and earned them a spot at fashion week.

This is the really the standard final challenge, and I'm glad they didn't mess with it. At this point, I don't think the designers need any twists or gimmicks. It's time for them to just show us what they have, what they've learned and what they hope to accomplish with a larger collection. However, none of the designers wowed me. Some of them did some unexpected work and stretched themselves, but I still wasn't blown away. This is Project Runway, I want to be blown away.

Anya pushed herself the most. After last week's anything-but-basic little black dress, she wanted to show the judges she could rely on design rather than print. Anya also had the clearest concept and carried it out the best. She found a sculpture and was struck by how different it felt from every viewing angle. Anya then set out to create a collection that explored that 360 degree view experience, and she did this in a simple red, white and black palette with no print or texture on the fabric. It was a brave undertaking, especially for a designer who can be a little unsure of her construction skills. Thankfully past designers came in to help so Anya was able to enlist the expert help of Bert. (She should hire Bert to continuing the tutoring. His sewing and construction knowledge is amazing). Anya was the first designer through to fashion week. 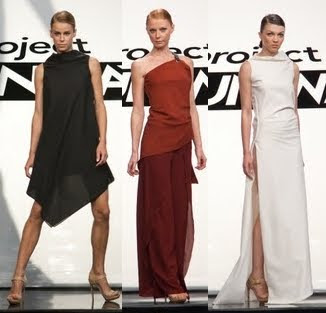 Michael Kors nailed it when he said that Viktor is the most commercial of the designers. His clothing may not make to for the most fascinating runway show, but it will sell like crazy. This collection would sell very well, but it put me to sleep as a show. (The LBD needed some work, but I liked the ideas behind the wide-hipped silhouette). In the past, Viktor has been able to pump things up while keeping his commercial vibe. I hope he can do that for the runway show because I like his work. Viktor was the second designer through to fashion week. 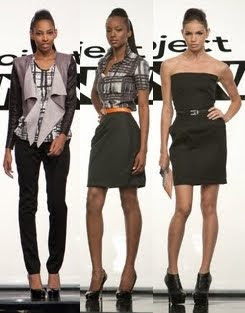 Joshua has struggled with editing this whole season, but he has never struggled with having ideas. I like that about him. I think a lot of his ideas are zany and fun to watch. He really tried to edit this mini collection, but he edited the wrong things. He edited out the fun. His concept was a play on hard and soft inspired by the artillery he found by a church. The concept was OK, but his execution lacked focus. He ended up with three very separate looks that didn't fit together. He showed range, but not a collection. He should have polished the middle look and played off of that as the theme. This is the kind of editing the judges are talking about. He doesn't need to edit out the things that make him fun. He just needs to focus and refine his ideas. Ultimately, the judges saw the potential in what he did. Nina said she could polish and restyle most of his pieces to be used in an editorial. Joshusa was the third designer put through to fashion week. Here's to hoping he can pull it all together. 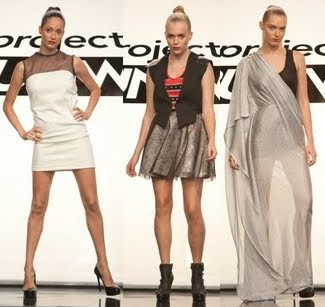 Kimberly and Laura were left standing on the runway wondering which, if either, of them were going to fashion week.

Kimberly's collection was an odd color mix, which the judges were quite unsure of. They liked her silver dress, but wondered if it was too much like the gold top she made for Nina in her olnly winning challenge. They didn't care for the coat or the entire middle look. I didn't like the top on the middle looks, but I was OK with the skirt. I thought the coat was cute, but I'm pretty sure ModCloth has sold that before. I wasn't bothered by the orange like the judges were, but I wasn't all that taken with the collection either. 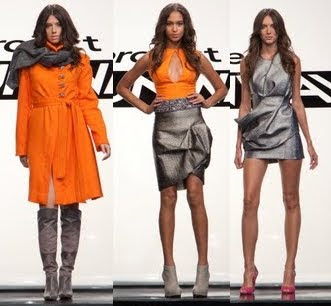 Laura had a really cool idea with her circle gown. I wish she had perfected the fit because it looked a little off. However, I think this is the best ideas she had all season. I was so-so on the jacket, and the skirt paired with it really did just look like a slip. That jacket needed pants--really cool pants. The dress in the middle is just sad. It doesn't fit. As guest judge Zoe Saldana said, it looks like a pillowcase with black tape around it. If Laura's whole collection could have lived up to the ideas of the circle gown, I think she could have had a better chance. Sadly, she was out, and Kimberly made it through to fashion week. 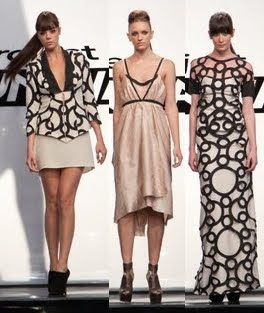 Since four designers made it through, I'm expecting a pre-runway show-down before they actually get to show at fashion week. I hope the designers anticipated that, since they will probably have to make another look on the spot. (I hate when everyone acts shocked by this).

Do you think the right people made it to fashion week? Who do you pick for the win? Do you think Joshua will cause a stink when he see Anya's collection and accuse her of getting help sewing it? I kinda see that coming.
Photo Credit: Barbara Nitke, Mylifetime.com
Project Runway