Project Runway S9 E11: Once Upon A Runway Dreary... 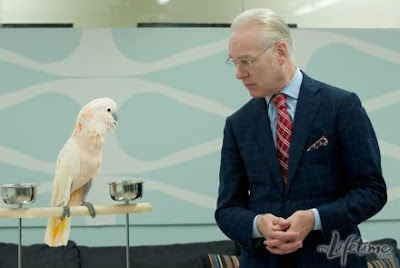 I'm sorry for the recap delay fellow Runway fans. Here are my quick thoughts on last week's episode. Be sure to share yours in the comments.

The Challenge: The designers had to create a look inspired by one of the four birds to whom they were assigned. (Why did they have four birds? Also, poor owl! I would have liked to see owl inspired clothing). Also, something about L'Oreal makeup.
The Prize: An advertorial in Marie Claire and $20,000!
The Twist: The designers were paired up, but actually had to compete against their partner. So Joshua and Bert both had the parrot for inspiration, but one of them would be in the top and one in the bottom.
The Twist Upon A Twist: After sketching, a trip to mood and several hours of work the designers had to do it all again for a second look.
The Twist Upon A Twist Upon A Twist: Once the designers were reaching the last few hours of work, Tim announced that only one look would get to walk to runway.
My Take: I loved the challenge. Bird inspiration is awesome and very on trend for this coming spring. I was angry when I thought they were doing teams, but I liked the idea of the designers being pitted against each other this way. It made the work harder instead of fight, which they tend to do in team challenges.

Team Cockatoo
Viktor: He's a strong designer so I expected him to beat Kimberly easily, especially since she was having a rough time getting it together. He look was flowing, elegant and excellently made. I loved that he shredded chiffon instead of using real feathers. Of the two looks, I'd much rather wear Viktor's, but the judges deemed it too literal so he got the bottom slot.

Kimberly: Burned one dress and had to start over. She couldn't figure out her inspiration. She sewed right through her finger. Nothing worked for. In the end she "pulled and Anya" and went "from tradgedy to triumph" by taking the top spot over Viktor. I didn't love the peek-a-boob part, but the layered fabric on the skirt, the leather belt and the beading were lovely so I don't begrudge her this top slot.

Team Raven
Laura: Doing an edgy, dark look for the bird best know for saying "Nevermore" was never going to be a Laura-friendly challenge. Her jacket was very well made, but I've seen it before. The judges came down the the feathers to being too literal and the pants for being too tight (and for reminding them too much of bird legs, which was also too literal). I agreed, but thought this was a bit step in the right direction for Laura as a designer.

Anya: Her structured dress had the most style of anyone and completely deserved the win it received. Without feathers or any other literal bird features, her dress captured the strength, darkness and beauty of the raven. She got flack from other designers for having to sew her model into the dress, but that's hardly a Runway first. She also wouldn't share fabric with Josh, who had fabric but wanted more. I didn't think this was so bad since she didn't know if she'd need it herself. Plus, she's shared in the past.

Team Parrot:
Joshua: A simple orange frock with nice draping and structure showed incredible restraint from this over-the-topic bedazzler. He did have to pin the flower on there, but I didn't think it was so bad. (Michael Kors did). I loved that he captured the brightness of the parrot without using a literal color match. He certainly earned the top spot over Bert, but the dress didn't make me swoon.

Bert: His dated silhouettes and loathing for the challenge were going to get him before long. The judges deemed it "pageant-y" and reminiscent of Wonder Woman. He tried to hide the parrot, and ended up with a sad dress that sent him home. It was his time.

What did you think of the challenge, the twists and the winner and loser?

Also, who are your picks for the top three? Anya is an obvious choice. Despite his low this week, I still expect Viktor to make it. Kimberly and Joshua both surprised me this week so I think either of them might have shot. It's feeling less and less likely that Nina will allow Laura to compete at fashion week.
Photo Credit: Barbara Nitke, Mylifetime.com
Project Runway

Julia Tasha said…
Anya is fabulous, I am keeping my eye on her. She always creates something that I would definitely wear. She is my fave for sure.
October 11, 2011 at 7:39 PM

kaye said…
I was also sad no one got the owl! What was up with that?
I loved Anya's dress. It was something totally different for her, and it came out awesome.
I hated Viktor's. I thought the shape was off, and although I liked the idea of the feathers, I thought the color made it look a dog peed on it, for real.

I'm really unsure who's going to fashion week other than Anya. My like for Viktor fluctuates, Laura doesn't do much for me and I hate Joshua. Kim's okay, but hasn't super impressed me.

Also, anyone else think those partnerships were fishy? They actually get people they'd like to work with, and then they're pitted against each other? Suspicious.
October 13, 2011 at 8:32 PM