By becca - October 07, 2011
My regular Project Runway recap will have to wait until next week. Sorry guys. But we have something else important to chat about--Project Runway All-Stars! 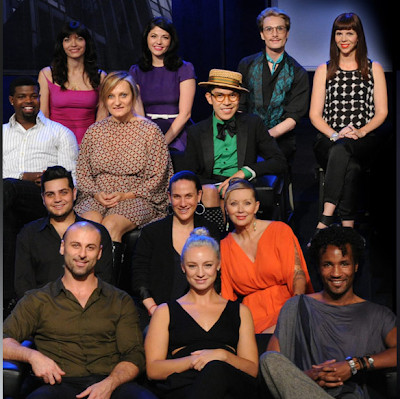 Austin Scarlett: Season 1, Fourth Place
Austin is an excellent designer and he's had the longest since his first run on Runway to hone his skills. He did well under pressure recently on this road trip show with Santino. Also, he's got plenty of personality so his entertainment factor will be high.

Kara Janx: Season 2, Fourth Place
Kara recently appeared on the Sundance channel show, All On The Line, because her line was failing. Host Joe Zee encouraged her to step away from the sad juniors party dresses she was making and back to the kimono look from Runway that made her famous. This enlightenment could help her now as long as she doesn't revert back to her party dress ways. She also runs the risk of over doing the kimono look. She did not speak highly of her Runway experience so I'm surprised to see her back.
Elisa Jimenez: Season 4, Tenth Place
I had totally forgotten about Elisa. I had to Google her. She is a polymorphic designer, meaning all of her clothing can be worn several ways. I remember the judges being puzzled by this. Also, it's difficult to illustrate on the runway. We'll see how far she's come since her time on runway.

Rami Kashou: Season 4, Runner-up
Rami never shied away from confidence. He knew he was good and was determined to beat Christian Siriano. Considering Christina was a tough act to beat, maybe this is Rami chance to sign. Lets just hope hes broken that habit of making only Grecian gowns out of draped jersey.

Sweet P/Kathleen Vaughn: Season 4, Fifth Place
Who doensn't love Sweet P. She narrowly missed Fashion Week beat out by the returning Chris March, Jillian Lewis, Rami Kashou and Christian Siriano. Season four was tough. I can't wait to see how she's doing and how she can outshine some of these designers from lesser seasons.

Jerell Scott: Season 5, Fourth Place
I don't really remember Jerell, but looking back at my recaps from that season, I mostly liked his work. He's flashy with lots going on. He's not afriad to take some risks and go for something big. I like this. Runway needs more excitement.

Kenley Collins: Season 5, Second Runner-up
Oh Kenley. Who could forget her. I hope she brings the cute dresses and leaves the attitude behind. I know this casting is mostly for her personality and likeliness to provoke other cast members, but I hope she surprises us with fashion instead. She is a talented designer.

Gordana Gehlhausen: Season 6, Fourth Place
Gordana's Miami chic went pretty far with the judges, but they wanted more. She tried to give it to them, but didn't quite make it leaving us with a finally that was all women in their early 20s. A finaly Tim later talked about being rather dull in his opinion. I had to agree. Irina was the clear winner and I barely remember the other two collections. I hope Gordana has broadened her range and can really show her stuff.

Anthony Williams: Season 7, Fifth Place
Anthony! It will be so good to have him back. I'm not sure his designs will stand up to the others around him. He had some trouble in his own season, which wasn't as good as several other seasons. He does have lots of personality though, and he's so nice. He'll be fun to watch for however long her lasts.
Mila Hermanovski: Season 7, Second Runner-up
This girl can design. I spent a lot of time not liking her during the season, but by the end she won me over. She tend to rely on simple color blocking and uses mostly black and white. If she's been able to break that since her time on the show, her construction skills will take her far.

April Johnston: Season 8, Fifth Place
I think April has an interesting aesthetic. I like her forgotten doll, macabre, Tim Burton feel. She wasn't ready to take a lot of the judges advice or push herself too much during her season, which was only a year ago. I hope she's taken some big steps forward in that year because I think she's really talented.

Michael Costello: Season 8, Fourth Place
I spent most of the season just wanting to hug this poor guy. The other designers were so mean to him. In the end he went further than most of them and was actually a pretty nice guy about it. That said, I really don't remember any of his looks. He just doesn't make the most memorable things. If he can get a bit more interesting, he'll have a chance.

Mondo Guerra: Season 8, Runner-up
Ahh! It's a chance for justice to be served. Maybe Mondo can win and set right the horrible injustice that occurred The Day Project Runway Died. Mondo is brilliant, and I would love to see him take this All-Stars season. Also, I still want that skull shirt.

Which All-Star are you routing for? What do you think of the cast? Who's missing?
Photo Credit: Barbara Nitke, Mylifetime.com
Project Runway

Catie D. said…
That's really exciting, but why so many from later seasons? And none from season 3? Not Ulli or Mycheal? Or Daniel or Santino?

I don't want to turn it into a "why didn't they put //my// favorite on the show?" but it looks like they're going to strict drama again this year, rather than featuring really talented designers.

Kenley? I couldn't stand her, or her fake "Omg, look at me, I'm /retro/ and shit" attitude, and neither could anyone else.

Jael Paris said…
Perhaps your favorites had other things going on? I know some of the PR designers have gone on to do well in their hometowns though they aren't national brands. Maybe they didn't want to take the however many weeks off?
October 7, 2011 at 3:11 PM

Gaëlle Pfyffer said…
So, I don't live in the USA, but I like Project Runway very much. Has the first episode of PR All Stars been aired already on American television? I'm asking so that I know if I can already look up the episode on the Internet in streaming. Thanks!
October 8, 2011 at 8:23 AM

Unknown said…
i cannot wait. and, since i am in colorado, it will be easy to know for whom i am voting.

becca said…
I was originally surprised by the absence of Chris March, since they seem to be casting big personalities. But I just realized he as a show on Bravo. That would explain his absence from Lifetime.
October 12, 2011 at 6:05 PM