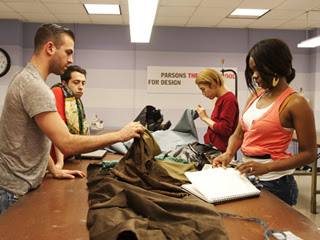 After the teaser last week promised another team challenge, I considered skipping this week's episode and watching the premiere of something else instead, but I didn't. It turns out that it wasn't really a team challenge after all. They just wanted to scare us. The designers were placed randomly in two teams of four and instructed to dress The Sheep Dogs, an unsigned, all-male rock band. Most of the designers have never done menswear so the challenge was a big one.

The teams were really just meant to create a theme for the overall band, but each designer had to create a unique style for their band member. The winning look would be featured on the cover of Rolling Stone, in Marie Claire and at a Rolling Stone show featuring the band. Also, in stead of a runway show the band performed two songs (which you really couldn't hear because they let the designers talk over them).

This was a pretty good challenge. I like when they have to do menswear because it really tests their sewing, styling and pattern making skills. Also, dressing rock stars is a lot more fun than dressing regular guys so they had full license to go crazy (not that they did, but they had the change). This was also the first challenge where the judges critiqued all the contestants.

Safe Designers
Laura didn't land in the bottom or top three. She made her rock star his designer red jeans and tried to mix that with a red tie dye shirt and some sort of jacket. The pants got good reviews. Michael Kors deemed the tie dye a bit to Sweeny Todd. Nina thought thought looked like a ladies jacket and scarf from the mall. I couldn't agree with judges more. The whole look was meh.

Anthony Ryan found a cool wood print for his rocker's top. The guy didn't love the sleeveless, but seemed OK with the look. Guest judge Adam Lambert liked the print too, but all the judges agreed that the overall look seemed like it came from the ladies department. Michael Kors actually called it a Golden Girls rock and roll moment.

Top Three
Bert found himself int he top three with a look I referred to in my notes as a "Purple Pippi Long-rocking." I think it ended up in the top three because nothing else was good enough. The rocker didn't like it. Only Nina liked the pigtails, which she deemed Viking-esque (I can see that). I couldn't see a rock star wearing this. It seems odd.

Joshua got the same critique he's received a lot this season, they like it, but there's a lot going on. I don't think having a lot going on is too much of a problem for a rock star. And Joshua was one of the only two who made an interesting rock look.

Viktor won the prize with his braided shoulder leather fringe jacket and excellent jeans. I think the jeans could have been a heavy denim and more distressed, but that takes time I'm sure Viktor didn't have. I like how cool the jacket looks even though it's not leather. I don't love the shirt, but I don't hate it either. I'm disappointed that this is the most interesting look, but I think it deserved the win.

Bottom Three
Anya's sewing skills finally caught up to her when it came to making menswear. She also couldn't envision the right proportions. Her fabric choices are always stellar, but she couldn't find what she liked this week so it just came out drab. Michael Kors called it reggae Jesus, lobster bib, Brady Bunch tunic. Her pants even ripped in the back. I'm glad she escaped elimination though.

Kimberly had the most quips about her look. Here's the list of thing I managed to write down: Peter Brady at an Autumn Harvest, bowling shirt, old man's pajamas, Scooby Dooby Doo, forest elf, Tinkerbell's boyfriend, PJ party, five dollar bin. They were again impressed with her pants, and ultimately let her stay since this wasn't such a bad showing for her first menswear look. Plus, she seemed to recognized the problems.

Olivier, the menswear designer, went home for his lack of time management, sad sad look, inability to make clothing for anyone other than model size people, this horrible demeanor when working with client, his inability to see what was wrong with this look, and his constant assertion that this guy was just too big. Seriously? He's not even that big. His look may not have been the worst of them, but it had the least vision. He stuck to his color palette. He didn't listen to his client, and he's a menswear designer so he should know better.

Overall, I was underwhelmed by the results of this challenge. I'd like to seem them dress female rock stars in the future so they can focus on creativity rather than being afraid of how the clothes need to be made. I do think the right designers won and went home. Olivier showed promise for a while, but I think he has a long way to go before he could win.

What did you think? Also, who are the top three? I can't tell, and I feel like I should have a better idea of who the top designer are this late in the season.
Photo Credit: Barbara Nitke, Mylifetime.com
Project Runway

Elizabeth said…
I think if the elimination had been based only on this challenge and end result, Anya would have gone home. The pants were ripping in the back, and the top was horrible. Oliver's attitude, combined with his boring look (which he's been sending down the last couple weeks), combined with insulting the client to his face all sent him home this week.

kaye said…
Yay Oliver is gone. I was sick of him bitching about dressing 'fat' people who really weren't big at all. Plus he's just super boring. I love a good neutral, but damn.

Anya was definitely a disaster this week, but she's my favorite so I'm glad she didn't go. I was annoyed earlier this season when the judges decided to judge on the long run and not just the single challenge, but now I'm thankful. Despite this week, I think she's definitely in the top three.

Although--the promo for next week has her losing her money at mood and not getting any fabric. Eeek!
September 24, 2011 at 11:10 PM