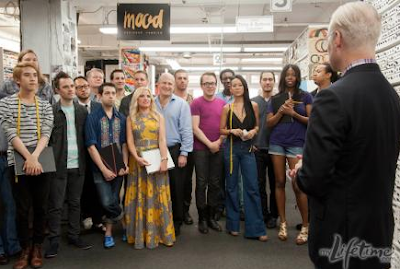 Heidi strutted on to the runway with 9 men at the beginning of last night's challenge. The designers began to worry/celebrate. Some couldn't wait to tackle a menswear challenge. Others worried about the "fat" people because they "require more fabric." The designers chose their men only to have Tim inform then that they would actually be designing for the wives and girlfriends of these men. The guys would have to describe their women and what she should wear. The men would help them sketch, accompany them to mood, and hope their ladies didn't dump them when they saw the look.
This is actually a pretty cool challenge idea. As most of the designers worried, a lot of guys are clueless about what their wives and girlfriends actually wear. Several couldn't remember what colors they liked to wear let alone what styles they like. Most of the men, however, could describe their woman's bust in detail. And it was that bust that terrified most of the male designers who couldn't figure out how to support, cover and flatter such gigantic boobs, most of which never exceeded a C cup except Olivier's client. Olivier was particularly terrified of curves and clients and models who talk back rather than behave like walking mannequins.

The Safe Designs
Speaking of Olivier, the way the episode focused on him indicated that he was either going home or at least in the bottom two, but he was actually safe. He had a terrible time matching his style with the Gucci-loving client he had. After trying to please her for a while, he gave up and just told her that this was for the competition. I'm glad for his sake that the judges didn't talk to his client because I don't think she was that happy. After changing a lot, he came up with some nice separates. He really is a good designer, but I sometimes wish he would have waited a couple years to come on the show because he needs to grow more. Although, in a couple years he may not have needed the show.

Laura was very concerned about creating menswear. Then, she worried that this guy's wife wouldn't like her style. She was hoping for a blonde trophy wife who liked Barbie. They never clarified the trophy wife part, but she was totally a Barbie girl in a Barbie world. Laura was thrilled and made her a very pretty gown. It wasn't anything special, but it was a nice dress. It was a little low or falling; I couldn't tell. I was bored, but her client seemed happy.

Kimberly didn't get much screen time. Her Tim critique consisted of Tim staring at her outfit and not saying anything. When she demanded he speak, all he did was apologize for worrying her. It was an OK look. It seemed likes something the client really liked. Her husband was happy. Kimberly was safe. The Top was cute. The skirt was average. No great fashion, but no harm done.

The Top Designs
Viktor's client knew how to describe his wife perfectly. In fact, he did it so perfectly that Viktor created almost the exact skirt she walked in wearing. He took this as a great sign. While I loved his design, I took this to mean that the skirt was available in stores so he should create something more interesting. Maybe that's why he killed his look with accessories. I like the colors, but it could have done without all the bedazzling. She's interesting enough on her own.

Anya's look didn't impress me that much on it's trip down the runway, but when she and the judges started talking about it, it grew on me. As Michael Kors said, she was the only one who had interesting design in her look. She created a unique silhouette that fit her client, who was actually going to a gallery opening, well. There was a lot of debate over the sleeve. The client liked it. Most of the judges didn't. Guest judge Malin Ackerman liked it and said she would wear it on the red carpet. She added that being interesting was sometime more important that landing on a best dressed list. By the time they were done talking, I hoped Anya would win.

Alas, she did not win. Joshua was awarded the win (but no immunity) for his little black dress. This really was a fabulous LBD. The first words out of Heidi's mouth were, "I'm shocked that you did not bedazzle her." She also noted that Joshua should keep this subtle designing in mind for the future. I liked how he toned down his style to match his client's, but he still pushed her to try new things like an open back and bright teal shoes. Also, for the first time, I noticed his sewing and tailoring skills. Overall, I was a bit underwhelmed by all the looks, which is why I hoped Anya would win, but I wasn't upset that Joshua took home that win. He really did a good job and stepped the furthest outside him comfort zone without completely losing himself.

The Bottom Designs
Bert found himself in the bottom three for the third time. His clients loved his look. However, it was short, tight, low cut, shiny and sleeveless. Too much skin. Too much. Nina said it really just needed a few more inches. The client objected. Heidi commiserated. Michael held Heidi's hand and told her they loved her even though she seems to prefer wearing no skirt at all. Ultimately, they reminded Bert of their hesitation with letting him in the competition, he's boring. This was boring and available in every short, tight, shiny clothing store in the mall. He didn't get sent home, but he did get reprimanded for this dull design.

Anthony Ryan may have had the sweetest guy client of them all (and one of the only guys that didn't spend half the time talking about his wife's boobs on national TV). He lost two of his wife's favorite vintage dresses at the airport and wanted something like them to make up for it. (Aww). Anthony Ryan was sweet enough to oblige. Sadly, the whole thing came out a little cheerleader/cigarette girl/"Super hero ice skater" (according to Michael Kors). I thought it was a little mean of the judges to insult the woman's taste so much since she clearly liked the dress. It wasn't a bad dress, but I agree that Anthony Ryan needed to modernize it a little and make it feel fresh. Also, his styling could have helped it, since styling is key when dealing with actual vintage clothing so it doesn't just look old. I'm glad Anthony Ryan was safe. The dress wasn't bad enough to deserve being sent home.

Bryce finally said auf wiedersehen. I thought he'd go weeks ago, and I'm surprised he stayed this long. His indecisiveness cost him. He tried to stuff too many details on one dress, and that dress didn't even fit his client. He didn't get the right fabric at Mood and had to dye his, which set him back. Then he wasn't sure he liked the color until Tim said it was good. He spent too much time worrying throughout the whole season, and it finally caught up to him.

What did you think of the top and bottom? What about the winner and loser?

I might say it's between Anthony Ryan, Anya, Joshua and Viktor, but Olivier, Laura and Kimberly could step up. I don't expect to see Bert go too much further, but he could surprise us with all his experience. Hmm.

Were you bored by the looks this week? I feel like the designers are getting too safe. I want to see crazy, fun fashion. If I wanted to see these looks, I could just go to the mall.
Photo Credit: Barbara Nitke, Mylifetime.com
Project Runway