Project Runway S9 E10: Back to the Future 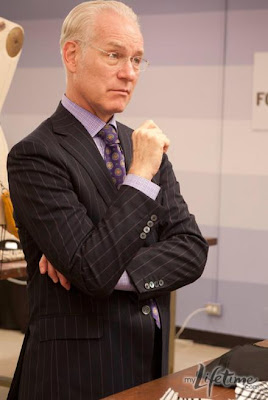 The Project Runway designers were challenged to step back into the 70s to find inspiration for a new and very now look. After flipping through 70s looks and a few minutes of sketching, the designers headed to Mood to make the most of their measly $100 budget. The winning look would be sold on Piperlime.com.

In a Project Runway first, Anya lost her money. Completely. Everyone at Mood helped her look, but she was left to beg for leftovers from other designers. Anthony Ryan gave her his $11.51 in change, which she used to buy one piece of fabric and some closures. Back at Parsons, the designers offered her all their scraps, except for Viktor who only offered judgement and cliches about competition.

After they set to work, Tim came in with "that look." You know, the one that connotes an ominous version of the infomercial chant, "But wait! There's more!" Tim informed them that they would be heading back to Mood with $50 and the goal of creating a once-piece look (no separates). While most designers seemed to take this as bad news, I think Anya was happy for the chance to buy some fabric even though she had a long way to go on the first look she was creating.

Safe
Kimberly was the only safe designer. I liked her concept of a circle top over a skirt. She was originally going to make it a mini, but Tim steered her away from a crop top over a mini. Too much skin. I think I would have liked it better with a maxi skirt or high waist, wide leg pants, but I believe she said something about not having enough fabric. I didn't care for her jumpsuit. The little keyhole in the front looked weird to me. Kimberly may be the queen of pants, but I think she should stick to pants that aren't attached to tops. 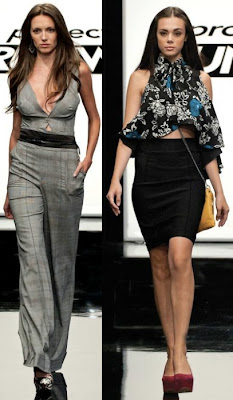 Top
Viktor was a clear top contender from the minute I saw the structure of this jacket. I want it. He went for full safari inspiration and put a snake skin tee underneath. Even though the judges thought the tee paired with jacket made it a bit dowdy, I thought the whole look was great. If I could get a pair, I'd wear those pants into the ground. The dress he made for his second look was chic, and really fit with his other look. I was sure he would win, and shocked when he didn't. After they decided to sell one of Bert's looks, I was sure they'd pick up Viktor's suit as well. Sadly (or madly if you're going by the look Viktor gave the judges), the suit will not be for sale on Piperlime.com. 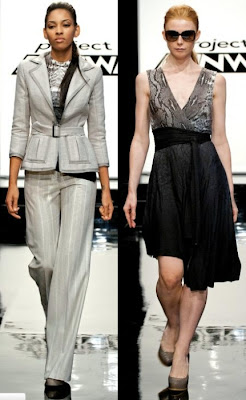 Speaking of Bert, he's really coming around. In fact, his screen time is often funny and pleasant. Maybe they let them watch some dailies from the first part of the season, and he decided to change his persona. This clothing almost depicted his bipolar personality. On one had he had sequins, shiny fabric and tight short shorts. On the other he had an understated white & beige dress with a cord belt. One was over the top and in need of some better construction. The other was kind of dull but very well made. The judges only briefly commented on the shiny booty "shorts" because they loved the top. I admit, the top was fun. I would probably throw it over jeans and a cami just like Nina. I have a hard time resisting flowing sheer tops of the 70s. Bert also had the home team advantage since he was not only alive in the 70s, but designing then. I get why the judges wanted to sell this little white dress since it sold out on Piperlime.com already, but I don't think it was the most innovative or interesting design. I think Viktor deserved this honor more. 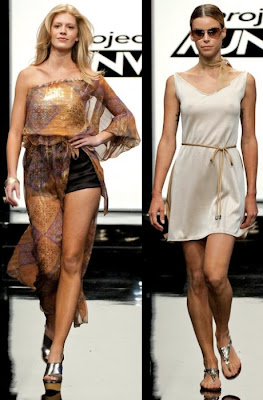 Anya may have lost her money on this challenge, but she didn't lose her ability to wow the judges since she won the challenge and earned her $50 jumper a $198 slot on Piperlime's website. For two looks that cost a combined $61.50 (plus muslin and dye so more like $70), they looked awesome. I'm not sure it was fair that the judges totally overlooked the bland color of her red top just because she lost her money and had to dye it. They simply gave her crediting for "doing something." Well, everyone did something. I was also a little puzzled as to why she didn't use some of the neutral solids other designers offered from their leftover piles. Maybe none had enough fabric. Anya's pieces were well designed and well constructed. I don't think she was undeserving of the win or the top slot, but I do sort of feel like the producers and judges came together and decided that a winner who lost her money would make better TV than a winner who wouldn't share fabric with the girl who lost her money. 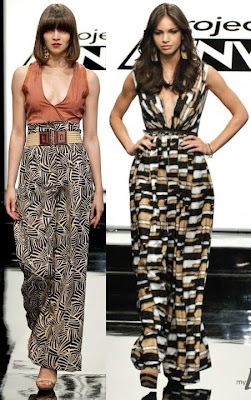 Bottom
Lady Laura, she of questionable taste (according to Nina) and well-to-do, Neiman's-shopping royalty, lost her mind on this low-budget look into the past. "I'm not used to not spending money," she moaned as Tim revealed their low, low budget. If Anya, can make if work for next to nothing, I'm sure you can squeeze two decent looks out of $150. Or not. I have no idea why she mixed these two prints. I like the idea of the chevron top with a bolder print bottom, but not this print. Her second look went the other direction with a subtle zig zag on top and a neutral pant. I liked the idea of the second look, but I wish the pant had been more structured and less late-90s-Mother-of-the-Bride pantsuit. Tim revealed during his critique that Nina does not like Laura's taste and she better watch out. I don't think anyone can win this competition if Nina feels that way about them, and these designs didn't help. 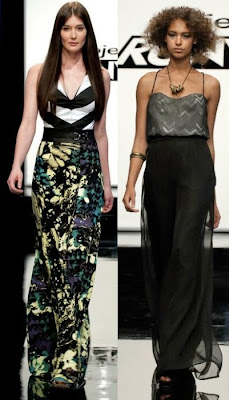 Joshua. Ugh, Joshua. His personality has official made me dislike him. He talks back to Tim, throws hissy fits, can't stand to be contradicted, believes saying "this is me" is reasonable excuse to do whatever he wants, and has no respect for learning anything about fashion history or designs he doesn't like. Since he wasn't alive in the 70s, he decided he couldn't know anything about them. When he started to bemoan his 80s birth disadvantage, none of the other designers let him go. Only Bert had lived during the 70s, but all of them were responsible for learning their fashion history. He made his best talk-to-the-hand gesture and disregarded their opinions. I wish he had been this annoying on the runway so he would be out. Anthony Ryan's designs were sad and drab, but they were at least 70s. I don't know what this mess was, but the judges weren't buying plaid pants or a boring maxi in neon leopard print. 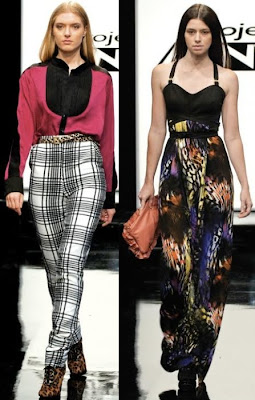 Anthony Ryan got the boot, which is really sad since he was kind enough to give his change to Anya, who ended up with the win. So much for karma. His designers were sad and the proportions were off, but I don't think they were worse than what Joshua showed. Ultimately the judges thought his girls looked boring and said they appreciated the risks Joshua took. I'm sad to see Anthony Ryan go, but I don't know that he has ever wowed me enough to make me think he'd win. 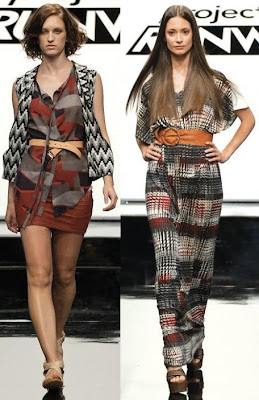 What are your thoughts on this retro challenge? Did the right looks win and lose? Now that we're down to six designers, who is going to fashion week? I'm voting for Anya and Viktor, but I don't know who the third will be.
Photo Credit: Barbara Nitke, Mylifetime.com
Project Runway