By Jael Paris - September 20, 2011
Are you sitting down because I have shocking news. Our favorite look of the night wasn't embellished or feathery or shiny. It wasn't even a color. Crazy, huh? I kept coming back to Aubrey Plaza all night, in part because I couldn't figure out why I knew her (She's the usually college casual April from Parks & Rec.), but also because her off-white ruffled dress has a prim, understated glamour. It's almost a modern, minimal take on My Fair Lady. I really like how the top of the dress could be a blouse that's in every woman's closet yet it's still perfect for the event. It's easy and casual, which is much harder to pull off in formal wear than many imagine. Will we remember it in three years? Probably not, but I've already forgotten what a lot of women wore. 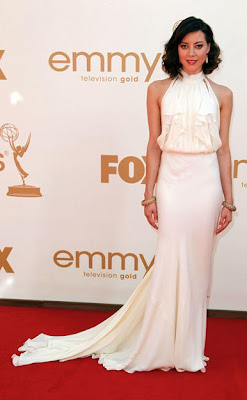 becca was also pleasantly surprised by Kristen Wiig's brown ombre gown. Brown isn't really a go-to shade for the red carpet unlike everyone's beloved neutrals of black and champagne. That's a shame really because the right warm shade does wonders for the skin. Plus with the Emmys being black, white and red all over this year, brown stood out like a neon. 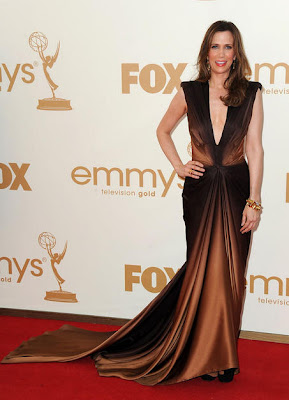 And now for the shiny. Maybe it's because I will never own such a fancy dress, but I firmly believe that if you're going to pay well over $1000 for a dress, it shouldn't be easy to get something similar at Penney's. Just look at the detail on Anna Ferris. That's hours of labor! The snake clutch was a nice touch. Bonus points for the over all Egyptian flavor which in turn makes me think '20s and once I'm there I'm at the bidding of the dress.
celebrities TV + Film