By Jael Paris - September 14, 2011
It's that time of year when I try to dress award show nominees in a memorable (though possibly controversial) look in hopes that the same few dress styles stop showing up on the best dressed lists. Branch out, ladies!

Have you seen Parks & Recreation? I'd put it off because it was marketed as The Office with a female Michael Scott, but this show is higher on charm than awkwardness. Amy Poehler is painfully earnest in her belief that government works and a park will make it better. Also, this. Like many other comedians (a-hem Tina Fey who I am sick of addressing in these posts because for crying out loud accept that you are hot and wear a color!), Amy plays it safe for formal events. I would like to see her and her pretty blonde hair in this bright Armani Prive. My theory as to why funny women don't go all out for glamorous events is that evening gowns can be restrictive, but this empire waist Dolce & Gabbana cocktail dress would allow for free movement and extra hors d'oeuvres. Don't worry, Amy. Nothing could be worse than this. 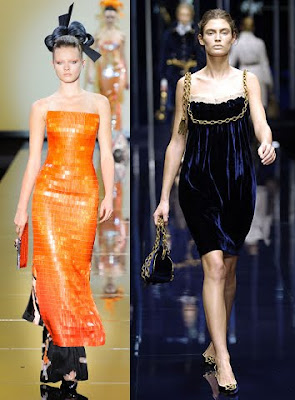 Jane Krakowski is funny and beautiful. She also tends to wear dresses that make her body look lopsided or matronly. (Her few hits were blah enough that I can't even remember them.) While simpler than what I usually suggest in these posts, Alberta Ferretti's flowing pale dress is soft and pretty. The draped beads eliminate the needs for excessive accessories; one diamond ring, a sparkly hair clip and she'd be ready to go. On the more complicated end of the style spectrum is this Dior Couture cocktail dress. Of course, she'd need to wear a slip under it, but that red with her curls piled on top of her head -- wow! 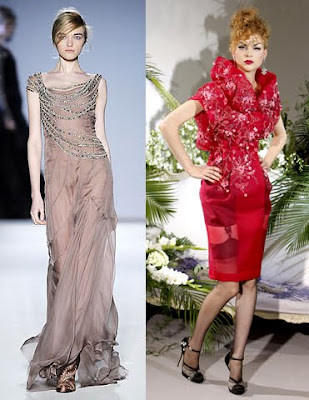 When I finish my Star Trek: The Next Generation marathon, I plan to pounce on Mad Men. I know little about the show, but I do know Elisabeth Moss' character Peggy is a little dowdy. The actress seems to have carried that into reality as most of the dresses she chooses do her no favors. I'd like her to brighten things up with this color block gown from Carlos Miele. I happen to think Moss is a cutey, and Mosichino Cheap & Chic's print dress is equally cute. 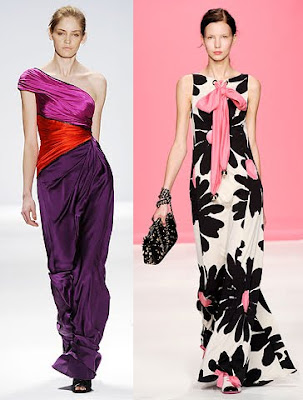 Christina Hendricks is always unfairly slammed at red carpet events. People bemoan that she doesn't always dress like her Mad Men character. Well, why on earth would she? True, 50s and 60s styles love curves, but as an actress she wouldn't want to be in costume all the time. With some alterations in the beading, I believe Andrew Gn's copper gown would look ravishing on her and with her perfect hair. Christina got in trouble once before for wearing ruffles, but the boatneck and more sculpted mermaid shape of this Dior Fall 08 Couture would compliment her instead of overwhelm. 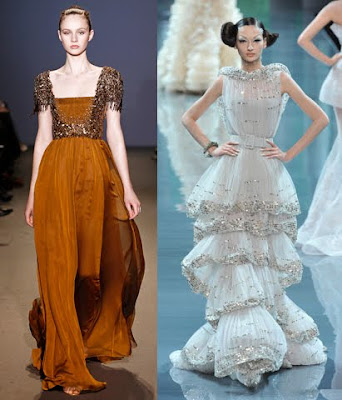 On Monday, you'll be able to vote on my choices versus was actually worn to the Emmys.
celebrities