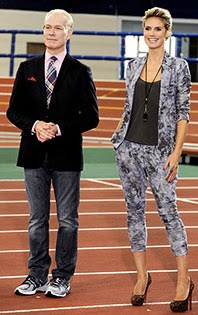 Team challenges are never easy to sum up, let alone watch. And last night Heidi seemed all but gleeful at the prospect of torturing the 12 remaining, I mean 11 remaining, no 12 designers.
Examples of Heidi's Torture:
Yet she remained adorably Heidi through the whole thing, and no one seemed to mind the torture. Also, if you examine the below track photo you will see that either Heidi or the producers forced everyone to take notice of which female designers where the thinnest with the best legs by giving only Anya and Kimberly with very bright, very short shorts. I guess in the world of Reality TV the longer the legs the shorter the shorts, but they could have been less obvious by providing black ones like the rest of the group. Although, Anya and Kimberly seem to be the only ones happy about wearing shorts at all. 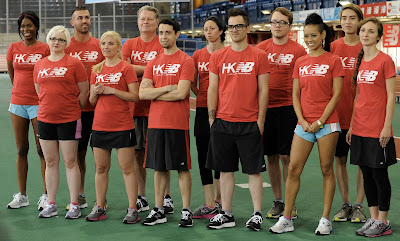 The four "winners" of the race got to be team captains and pick their teammates. They were then challenge to design three looks to go with Heidi's "line" of sneakers for New Balance (can you hava line with only three sneakers?) Oh, I almost forgot to mention, Cecilia quit just before the race. I found her very boring so I'm glad she left. As a result the team leader with the last pick got to bring back any eliminated designer. Viktor got the honor and brought back Josh Christensen. He was a good choice, especially for Viktor's team. Welcome back Josh C.

There was no clear winning or losing team so hang with me on the summaries.

Team Bryce
Bryce, Kimberly, Danielle
I was a little worried for Bryce as a team leader. He doesn't have the best design track record. However, he did pretty good as a leader. He used his team's ideas. He designed a very cute dress himself and, overall, everyone got along. Michael Kors observed that the little snap dress, which Bryce designed, was a perfect shape for any one (add a few inches to the hemline and sure) and a great jumping off point for the collection. I agree. I also love the snaps along the side, which I didn't noticed when it first walked down the runway. Kimberly did the shorts and skirt of the collection, which both looked pretty good. Danielle made the jacket and tank. Danielle's jacket would have looked a bit better with the skirt, but it was fine otherwise. Her tank was unforgivable in the judges eyes. They called it a souffle that flopped. 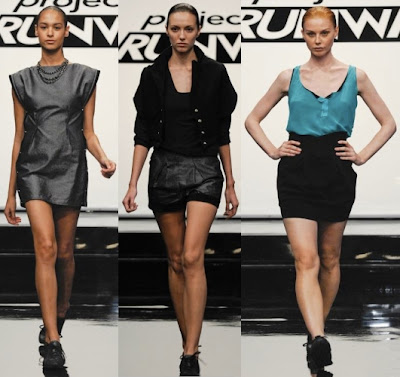 Team Viktor
Viktor, Olivier, Josh C.
This was probably my favorite team overall. Viktor did a great job leading. He didn't have any drama (which leads me to believe Bert was mostly at fault for their team challenge struggles since Viktor played well with others here). I loved Viktor's look. I want the jacket and I love the easy little rumpled jersey dress. It seems so simple to wear, and I can actually see myself donning little leather sneakers with it. Olivier's maxi shirt look was a bit less successful. Michael Kors said it looked too Sound of Music. As someone who wore long skirts with sneakers, Doc Martens and Sketchers for 13 years of private school, I know this look can work. The shirt needed to be sportier and less full. Also the top would have probably worked better as a really structured tee rather than a tank. Josh C. made a very sporty tee with great shoulder details. Guest Judge Erin Wasson though it looked like a backpack and loved it. His pants were well tailored. His look made me glad he was back. This is the work I expected from him based on his portfolio. Let's hope he can keep it up when he's on his own. 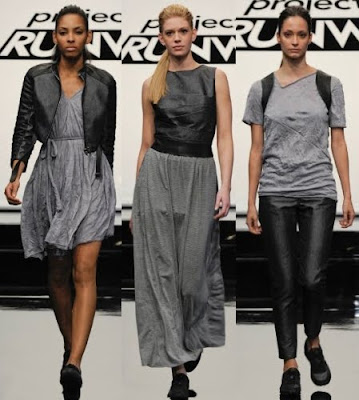 Team Anthony Ryan
Anthony Ryan, Laura, Bert
Bert does not play well with others. I can't entirely blame them, but Anthony Ryan and Laura made it worse by deciding to exclude him from the beginning. Anthony Ryan would have been fine leading anyone else, but not Bert. Also, Bert behaves like a four-year-old not a 57-year-old. The team drama resulted in Anthony Ryan's romper. Nina said it looked like pajamas. Michael Kors marveled that it managed to be both too loose and too tight--a gym short with camel toe. The judges made a resounding (and surprisingly harmonized) moan of disgust and horror when his poor model turned around to see "camel butt". Laura's look was blah, messy and a little sad. The judges praised Bert's look as the only decent one, but they only briefly mentioned that it didn't fulfill the challenge at all since no one would wear it with sneakers. Had Anthony Ryan and Laura done even halfway decent looks the judges would have berated Bert for his look. 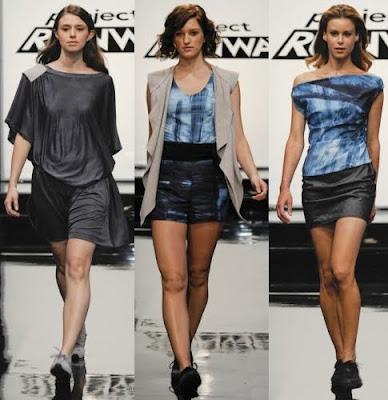 Team Joshua M.
Joshua M., Anya, Becky
I like Joshua M. as a designer. I even kind of like his team-picking strategy of getting Anya for design and Becky for sewing. I also liked most of the vibe that came through in his collection. However, dude needs to learn to be more subtle. He buddied with Anya and set Becky aside immediately. A good leader at least pretends to listen to ideas and finds ways to make everyone feel like part of the team. Instead, he resorted to calling Becky's work dowdy and old, which he later apologized for after making her cry only to turn around and say it again on the runway. The resulting collection wasn't bad. The judges were split on Joshua's shredded vest, but seemed to like the look overall. Anya's maxi dress was a favorite, but they weren't all sure about the pop of color down the middle. The look they said Becky was most responsible for was probably the worst with the too-short shirt and too-tight skirt (and desperate need for at least a sports bra). Joshua M. did take ownership for the design work though and admitted to keeping Becky out of a lot of it. 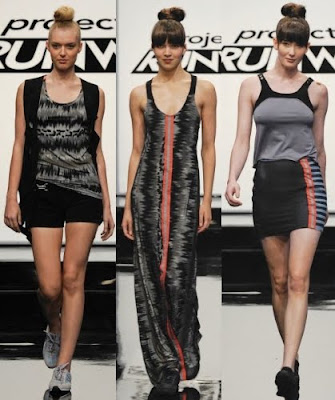 Winning
In the end Viktor and Joshua M. were both granted winning spots and immunity for next time. Viktor's complete look of the jacket and dress were chosen and are for sale on Amazon. The jacket looks just like it did on the runway, and I want it even though it's sold out on Amazon. His dress, however, looks a little frumpy on the Amazon model and not nearly as fun, but that may just be because of the styling. It's hard to tell. The grey dress is also sold out on Amazon, but you can sign up for alerts should either the dress or jacket become available again. Joshua M. won for leadership (poor Becky), but Anya's dress ($118, Amazon) was awarded the slot on Amazon. However, Heidi took the pink stripe off, which I think makes it kind of boring and probably explains why it hasn't sold out. Also, it's suspiciously not pictured with sneakers (see below). 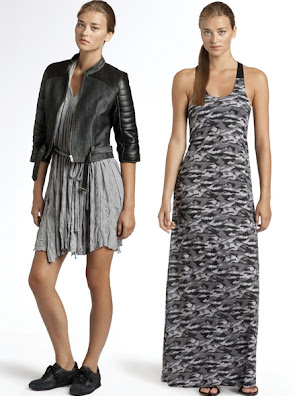 Loosing
The judges agreed that Anthony Ryan had the worst look of the night and was the worst leader of all the teams. (Though Joshua M. was far meaner to Becky. Becky is just way classier than Bert and didn't try to get him eliminated for it.) However, Michael and Nina hated hated hated Danielle's chiffon tank and worried about her chiffon obsession/potential/design history/everything else. Heidi argued that judging was supposed to be week-by-week not cumulative ("One day you're in; the next you're out") so Anthony Ryan should be out and Danielle should stay. Michael and Nina, operating on the premise that Heide's saying simply means no one ever knows how they will choose to judge things, wanted to keep Anthony Ryan for his potential and get rid of Danielle. They won, and Danielle went home even though Heidi made a point to tell Anthony Ryan she wanted him out. Honestly, I think I agree that Anthony Ryan has more potential, and I am worried about Danielle's chiffon obsession. I didn't really want either to go home. I'm personally done with Bert. Sadly, his look seemed good next to his teammates' creations so they couldn't really eliminate him even though he didn't do the challenge. 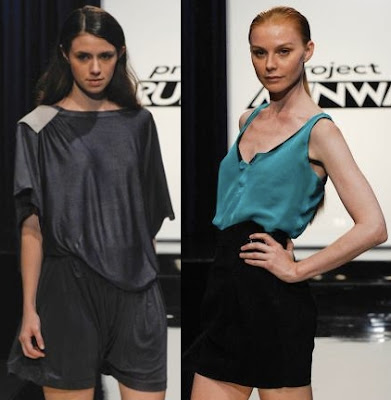 Rachel said…
1. I'm ok with Danielle going home. I feel like she keeps making the same shirt over and over, and it's not a great shirt to begin with. AR's look was obviously the worst though.

2. I love the gray dress and motorcycle jacket. A lot. I thought the maxi dress was an unnecessary second winner.

4. Bert is obnoxious and mean. I'm sick of him, but he creates drama and I guess that's what reality TV is all about... :(

5. I understand Joshua using Becky's sewing skills as a strategy, but he just treated her like the hired help instead of a part of the team. He was reeeally harsh to her. I would have cried too.

kaye said…
1. I thought Anthony Ryan should have gone. That jumpsuit burned my eyes in its awfulness. I agreed with Heidi that they should be judging week by week. That said, I still get while Danielle left, even though I like her.

3. Not really. I liked Viktor's look, but not so much the others in his team. Also, I loved that maxi dress originally, but hate what they did to it. It's boring w/o the stripe, and the print is wayyy different. It's way too camo-y.

4. Bert is just plain obnoxious. I hope he goes soon.

5. He was definitely way to harsh on her. Poor Becky. I haven't liked everything she's made, but I loved her dress last week too.