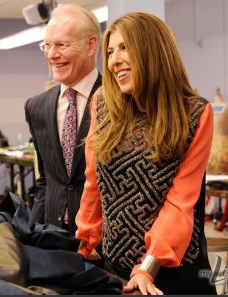 Last night Heidi told the designer they would have a client, and they should be afraid, very afraid. Well, she wasn't lying. Their client was none other than Nina Garcia herself. The fashion editor, author and judge came onto the runway and announced that she does like anything.

Only tailored streamlined silhouettes for this this fashion maven. Also, the design had to be day to night--a concept I don't think the designers fully grasped. While I find Nina's style a bit tame for someone who has access to such fun and exciting clothing, I did think it was kind of an interesting exercise in working for a demanding client with impeccable taste. Usually the designers do client challenges with people who don't really know what would look good on them. Nina knows. However, beyond that and watching the designer crumble under her stern gaze, this challenge was a bit boring for me.

The Safe Looks
Anthony Ryan and Becky ended up with the same fabric. It's not clear who picked it first (Where were the camera people? How did they miss that?), but Anthony Ryan was a bit miffed until he decided he would simple show Becky how it was done. It's actually hard to say who used it better. Both designers were safe so they didn't have to battle it out before the judges. I love the little vest/top he made. I want it, actually. His skirt just leave s a bit to be desired. Becky's dress isn't the greatest one I've ever seen, but it is quite cute. Also, she did a really good job of making her bright, colorful tendancies fit into a Nina-like look. The grey stripes have bright yellow piping running along the edges, which was a very fun touch. Who do you think wins the fabric battle? 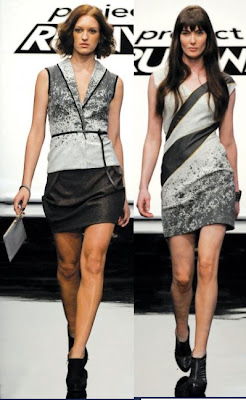 Bert turned in a boring black dress. I'm not a fan of the boob tucks in the front or the wee front slit. It feels dated. I feel bored with him. Next! Joshua's look had a sporty/future feel to it like a varsity Judy Jetson only toned down for Nina. I liked it. I don't think Nina would wear it, but not a bad try at subdued for someone who loves flair so much. 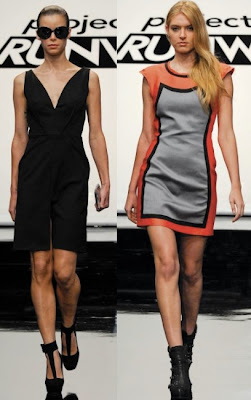 I was a little sad that this tame challenge fell on the week Laura had immunity. Her personality still bugs me, but I wanted to see her unleash every idea she has one a crazy, fun challenge because I'd like to see what she'd do. I mostly liked her look. Nina wouldn't wear it, but oh well. I love the color. I think the sleeves and the sheer bits on the skirt are really cool. I do not like the criss cross detail in the front, especially at the waist, and something in the proportions feels just a bit off. I think we got two whole glimpses of Olivier last night. And I don't even remember if we heard him speak. I really liked his tailored look even though he is struggling to finish the fine details as well as I think he can. It reminded me a lot of Julian Louie's work (especially FW2010 & FW2009). Actually a lot of his work reminds me of Julian Louie's. Hmm... I don't know what to think about that now. 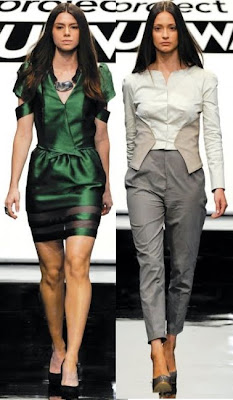 I do believe they should have opened the bottom three up for a bottom four to include Bryce. The design wasn't totally horrible, but it was boring. And it looked rumpled, ill-sewn and ill-fitting. 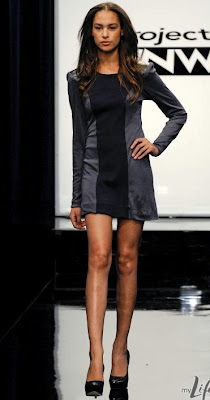 The Top Three
Anya originally bought a mustard print that Nina just hated. She managed to dye it (which a little guidance) and not only save herself but end up in the top three. I'm not jumping up an down about this look, but she did a pretty good job for a person who can't sew. Speaking of sewing, Laura actually helped her. She did the collar, which was something the judges swooned over. However, Anya still made that jumpsuit fit so I think she deserves some credit for her sewing skills. I just hope she can learn a bit more while the other designers are still helpful because her lack of ability will kill her when there are fewer designers left and no one wants to give a compliment, let alone advice.

Maybe I've been looking at too many fashion show for too long but I've seen Viktor's look before and I've seen it more than one place. A few places maybe. He did do separates, which is very cool because it looks like a dress and is therefore great for day to night. In fact, he really got that day to night thing very well. The structure is perfect. He finished it beautifully, and didn't mess it up by over styling it. I do think he earned his top spot, but I still find it worrisome that the judges* thought it was so revolutionary when I could pretty much go buy this right now. *Michael Kors did note that it was very "right now" and not the "next thing" like Nina usually wears. However, Nina usually scolds designers for being too referential. 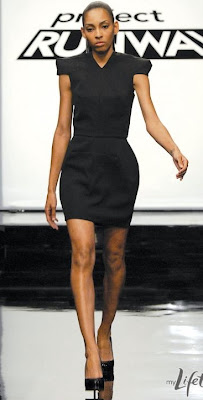 Kimberly won. Nina specifically requested pants even though Kimberly had wanted to show us she could make a dress. She struggled in the work room to get her reworked design right, but she ultimately pleased Nina and Guest Judge/Marie Claire Editor Joanna Coles very much. I don't think the top was as "transformative" as they thought, but it was really very cool. I would totally try it on if I saw it in a store. Although, I would probably wish it didn't have the little stomach-accentuating panel. (If that wrapped all the way around to the side or back I'd be all about it, but this is bad for non-flat tummies). Kimberly's pants really are great, and I do want a pair. Out of the bunch I think she fullfilled the challenge best without being totally boring. She deserved to win the honor of Nina wearing her look, the taxi cab ads, the Marie Claire ad and the Marie Claire editorial. Plus, she gets immunity. That's quite a win.

The Bottom Three
Danielle made a signature Danielle look only as Joanna Coles said, "That makes me think your model's depressed. It makes me think you might be depressed too, especially after this particular episode. Honestly, I'd think she was ill." Danielle didn't function well after Nina gave her edits. She doesn't seem to take direction all that well either. Add to that how she struggled (and failed) to find the right fabric, and she was set up to have a bad week. She would have probably been safer (but made Nina a bit angry) if she had just went with her original idea. Then Bryce would have had her spot.

Of Cecilia's dress Joanna said, "If Nina wore this dress by Cecilia, I would have her committed." Nina said, "It looked overall sad." Cecilia said she wouldn't have minded going home after they proclaimed her safe. If only she had said that to the judges...

Julie went home. I really don't know why this was worse that Cecilia's. At least the idea of a coat dress for day to night is better than whatever it was Cecilia made. Sadly it's not a good coat, a good dress, a good coat dress, or, as Joanna Coles coined, a good "droat". Michael Kors called it a house coat. Lose the collar and add a tie belt and I'd call it a robe. It's not the worst thing we've ever seen, but after a series of bottom three appearances I guess the judges though Julie's time had come. I disagree since Cecilia was worse, but I don't know how much longer Julie would have lasted anyway.

What did you think of the challenge and the looks? Do you agree with the winner and loser? Why were there two guest judges, especially when the awesomeness that is Joanna Coles was there? When Joanna Coles arrives, the judging panel should just take a nap and let her handle things as it is. (I'm actually considering subscribing to Marie Clair because of her.) Anyway, who do you think will be the next to go? Is anyone ready to start predicting who will make it to fashion week (I'm not, the wins have been all over the board)?
Photo Credit: Barbara Nitke, Mylifetime.com
Project Runway

Rachel said…
I agree with the winner but not the loser. Cecelia's was the worst for sure.

I vote Becky in the fabric battle.

kaye said…
I thought Cecelia should have gone too. I wish she had said that to the judges.

I actually wasn't a fan of Kimberly's top. Sure, she makes great pants, but I honestly didn't think the top was flattering. Anya has become a favorite of mine, I loved her look and thought it should have won. I hope she can get past her sewing issues.

I wasn't crazy about Viktor's dress. I don't like him much as a person either. He seemed super bitter about the help Anya got, and I thought he just needed to let it go.

Anonymous said…
I think Becky definitely won the battle of the fabrics, he dress was well constructed and beautiful use of the print and a solid. I wish Cecelia had gone home, she just doesn't want to be there and I think if she'd admitted that to the judges they'd have cut her.
I didn't like Kimberly's top when she started out but seeing the final items made me change my mind.
August 22, 2011 at 11:20 PM