Last night Heidi Klum sauntered onto the runway sporting stilts. I don't mean the ridiculously high heels she wears. I mean real stilts. Seven stilt walkers followed her onto the runway where she proclaimed they would be the models for this challenge and the designers would be randomly assigned to teams of two. Heidi pulled names out the dreaded bag and the designers were paired as follows:
As usual a ton of team-drivin drama ensued. Viktor and Bert refused to make any attempts to communicate with one another. Viktor acted like a pouty teenager and Bert behaved like grumpy old know-it-all who wanted these kids to get off his lawn. They didn't work well together. Bryce and Fallene had the most unfortunate pairing since both of them were in the bottom three last week. Rather than working with Fallene's strengths, Bryce overpowered her and got frustrated with her lack of technical knowledge. Meanwhile, Fallene lost it. She ceased to function under the pressure. Joshua and Julie were another odd pairing just because their styles, visions and personalities don't cover any overlapping territory.

Teams aside, I love the idea of dressing these leggy wonders. It's a great play on proportion and an excellent way to showcase the world of tall, thin fashion illustration to the real world. This is one of the more creative challenges I've seen come from Project Runway in a while. I just wish it had been saved for later in the season when the designers had developed more of a rhythm. I also wish it wouldn't have been a team challenge because I would have liked to see individual visions take on these epic proportions. On the bright side, the designers finally got to go to Mood (and we got to see Swatch the dog)!

Anya and Olivier were declared a dream team from the beginning, but neither of them are super fast in the sewing room so that really caught up to them. I was actually a little worried about how her print-heavy and colorful vibe would mesh with his neutral palette and modern style. They actually managed to marry the two well. The skirt had great movement on the runway, but the top just needed more time. I think it could have looked really cool if they could have finished it they way they wanted. The look landed Anya and Oliver in the only safe spot this week. 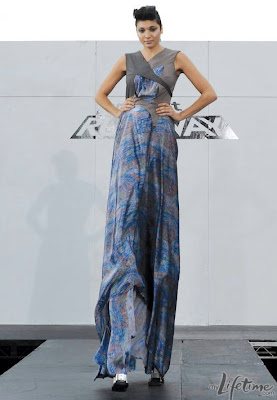 The Top Three
Danielle and Cecilia worked together for an elongated blouse and chiffon pant look. All of the judges liked it. Michael Kors was impressed with their ability to tame chiffon and tailor it so well. Guest judge, Kim Kardashian liked the embellished neckline. Heidi liked the sheerness of the whole look. Nina was the only one to point out that while it was a "very pretty outfit" it was too subtle in a challenge that Heidi had said was about creating an "eye catching, imaginative and larger than life" look. (For once the judges seem to have read the challenge instructions). I agree. It was pretty but safe. Also Danielle's aesthetic took over so I don't know where Cecilia was in the design. Also, the hair was horrible. Danielle needs to learn a few things about hairstyles and the stylists needs to never interpret cryptic advice as something this ugly. I think they can safely assume that no one wanted this hair. Their pretty look got them through to next week. 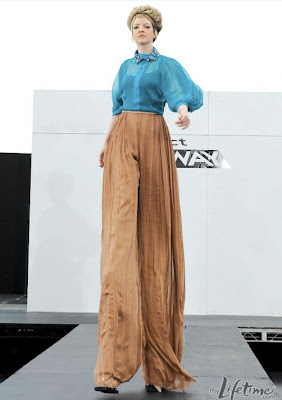 Kimberly and Becky are two designers that haven't created anything too memorable so far. However, they did a great job pulling together this tall order. Michael Kors couldn't get over thier "kick-ass" tailoring. Nina loved the pants, but thought the half collar put the jacket in a dangerous circus-y territory." The two did a great job working as a team. Becky made the jacket and Kimberly made the pant but they clearly collaborated on the design because it didn't have that disjointed feel that a lot of "you make half and I'll make half" team effort have had in the past. I loved that they showed off the model's tattoo and worked both of their styles into the look. I agree with Nina on the collar. I also agree with Michael Kors that this look would make any wearer want the corresponding tattoo. Looking at the picture I think this was a close competition for first, even though I thought the winning garment was an obvious choice on the show. I think because this one lacked presence on the runway compared to the winner. 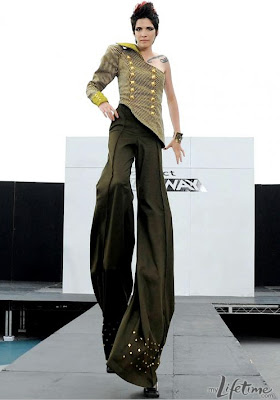 Anthony Ryan and Laura made up the winning team. The vibrant red dress had dramtic movement and super fun shoulders that made it the obvious top choice. A small part of me wishes the most dramatic look for this challenge would have been even more dramatic, but I think that has to do with the teams and the timing in the season. All of the judges liked it. Michael Kors even noted that it would be a great look when scaled down to the size of a real woman, which tells me it's a bit tame, but I suppose Michael has a point. This was the winning look, but because the judges are being stingy they only awarded Laura with the win. Anthony Ryan was gracious enough to say the design was mainly hers so she deserved the credit. The only prize was immunity though so I don't see why both designers couldn't have been awarded. There are still enough left to give two of the immunity. 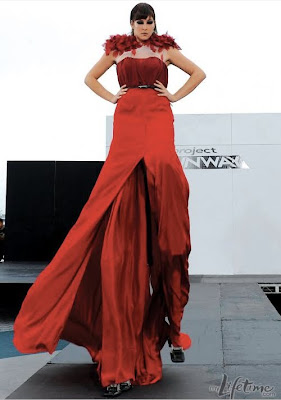 The Bottom Three
Julie and Joshua struggled with the odd pairing, but had some good ideas along the way. Sadly, the execution turned costume and the judges weren't even sure what the costume was. They tried a matador look and the shirt was way too literal. I thought the graphic pants were cool, but they needed to be pair with a chic and simple top and maybe a long dramatic duster instead of a bull-fighting red top. Never go literal with a costume. It's practically one of the Project Runway 10 commandments. Despite breaking a rule written in stone, team J was far from the worst and crossed safely to next week. 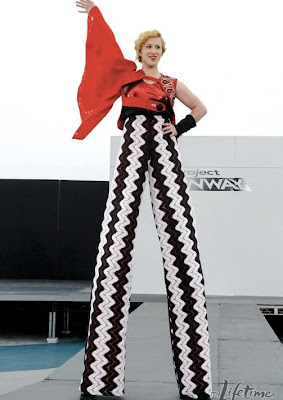 Bert and Viktor drove me crazy. I never want to see them work together again. However, their drab dress got plenty of witty remarks from the judges. Michael Kors saw wallpaper and curtains from a tacky catering hall. And Kim Kardashian thought it looked like Julie Andrews character in The Sound Of Music made a gown Marie Antoinette out of curtains. During elimination Heidi said the fabric choices were so bad it wouldn't have mattered what they designed. The two men scquabbled over who was more responsible and the judges believed Bert (I don't know who to believe because of how they edited the episode). This left Viktor alone in the bottom two. 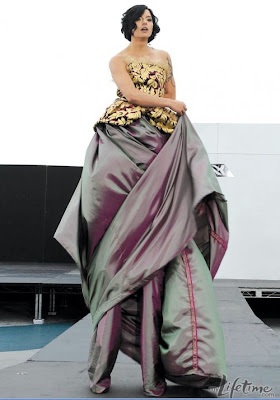 Bryce and Fallene landed back in the bottom again just as they had worried. Their look deserved it. Kim said it looked like it took 15 minutes to make. Nina said their idea had promise but they needed to make more than just the beginning of something. Michael loved the head piece, which is the only thing Fallene made. They hated that they referenced several styles of dance without focusing on any one genre. Fallene took the fall for the look. However Bryce made the whole thing so I'm not sure who was more to blame. Also, it looks a bit like his wee wee pad tutu from last week. Fallene did create the only thing the judges liked, but her inability to fight for herself and "make it work" landed her in the bottom two with Viktor. Fallene went home, which is sad because I think she had cute ideas. She just clearly couldn't execute them in the Project Runway format. I kind of think a double elimination would been more fair this week (just like a double win). I sort of suspect Bryce will be the next to go anyway. 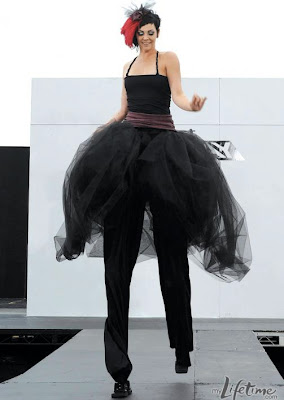 What did you think of these week's winner and loser? Also, were you pleasantly surprised by Kim Kardashian as a judge? I thought she'd make blank "it's pretty" comments like a lot of the celeb guest judges, but she actually had something to say on several looks. What did you think of the challenge? And who will be going home next?
Photo Credit: Barbara Nitke, Mylifetime.com
Project Runway

Fanya said…
I think she is more opinionated than the polite celebrity judges. If you really want dramatic comments, get Katy Perry or Lady Gaga.
August 12, 2011 at 12:48 PM

Fanya said…
p.s. this bugs me. Is Heidi wearing stilt in your picture? or was she looking unnaturally tall because she was wearing 8in heel and it was shot at a good angle.
August 12, 2011 at 10:48 PM

becca said…
She's looking unnaturally tall because of those crazy-tall shoes and the angle. I guess she didn't want to miss out on the stilt-action at the outdoor runway show so we wore the closest thing to stilts she owned.
August 12, 2011 at 11:37 PM