Fashion Can Be Art

By Jael Paris - August 18, 2011
The Gloss' article about the shortcomings of the Savage Beauty exhibit made me a wee bit ragey. It's not that I loved the exhibit and they didn't think it was awesome. I can totally see how it wouldn't be the right cup of tea for some people. No, my problem was with the author's discomfort with the idea that fashion is art. She explains that, "no matter how radically [McQueen] interpreted a jacket or a kimono or a pair of trousers, they were never not jackets, kimonos and trousers." Frankly, that argument is poor. Art, and especially the industrial arts, aren't about making an object a different object. No one would say Frank Gehry isn't an artist just because the Walt Disney Concert Hall is still just a building. 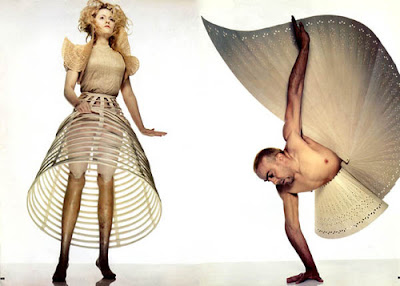 People have debated the nature of art for centuries, but the importance of expression has always been a factor in that argument. Beyond technical skill, it is the expression of ideas and emotions that separates art from mass produced Walmart decor.

In the biography of Coco Chanel, the immortal designer claimed fashion "isn't art; it's business." Sure enough, Chanel is the only company to make money off its haute couture shows. My issue with the idea that fashion is only business not art is that fashion is then only for the elite. It's an insider's game of trends and hot labels. If it's not about conveying a mood, capturing an idea or wearing your heart on your tattered lace sleeve, then I'm not interested. This isn't to say that every time you throw on sweats because you're tired, you've created art. But when it comes to luxury lines like those we will be reviewing in a few weeks, I don't have time to spend on any designers who can't see beyond business.