The Horror: Vajazzling Without The Commitment

By Jael Paris - April 07, 2011
Balmain's greatest sin is that it exists. I'm fine with the fact that the company was around in the 50s making lovely 50s gowns, but that's not what's happened since the most recent revival of the company in 2006. In fact, that's the opposite of what happened. Why revive a brand only to do something completely unrelated with it? Could Christophe Decarnin produce this vision under his own name? 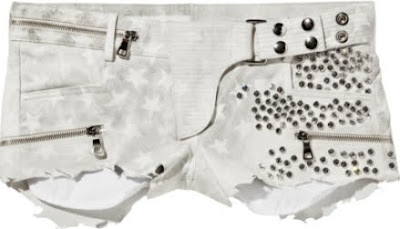 While I initially enjoyed the hair band army chic, each season is starting to blur together. This season was a horribly cliched punker Americana. That show's in stores now so we can get a closer look at...I can't even call them shorts. Let's call it a modesty loin cloth. This MLC is leather; perfect for summer. The Swarovski crystals class it up too, so you can totally take them from the beach to your sister's wedding rehearsal. I'm glad the cut line is a little lower in the back. That will certainly keep me from looking like Rhianna on Rolling Stone. Maybe they're hoping girls with butts also don't have $6,000 to drop on a MLC.
the horror

Audi said…
HAHAHA! "Modesty loin cloth" -- I love it! Balmain produces a bunch of overpriced crap; the fact that the brand exists is a testament to consumer stupidity.
April 7, 2011 at 5:02 PM