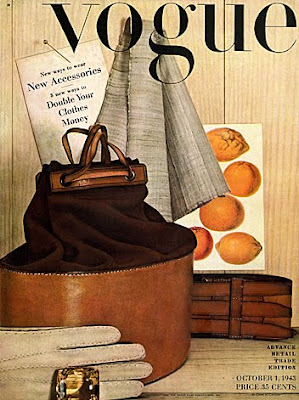 Irving Penn (1917 - 2009) rose to fame as a photographer for Vogue in the 1950s. He began his career with plans to become a painter. After college, he worked as a freelance designer and illustration for several clients including Harper's Bazaar. After briefly working in advertising design at Saks Fifth Avenue and living in Mexico to paint, Penn returned to New York and began supervising cover design for Vogue. His designs failed to interest the staff photographers so he took the pictures himself. This resulted in his first Vogue cover and the first color cover for the magazine (right). He went on to photograph 150 covers over the next 50 years (below).

Like many fashion photographers, Penn had a favorite model who often served as a muse, Lisa Fonssagrives (the subject of the below photos). Penn married Fonssagrives, and the two worked together throughout their 42-year marriage.

His photographs are calm, often showing the entire subject with little movement and minimal backgrounds. Penn’s work stay true to his signature style despite the major shifts in fashion that took place during his career.

The below outfit is inspired by one of Penn's iconic photographs, which appeared on the cover of Vogue on April 1, 1950 and featured Jean Patchett modeling a dress by Larry Aldrich and hat by Lilly Daché.