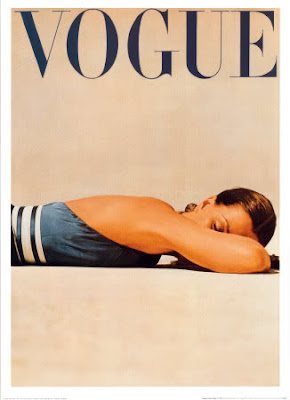 John Rawlings (1912 - 1970) worked as a staff photographer for Condé Nast Publications from the 1930s to 1960s. He began his fashion career as a window dresser before starting at Condé Nast in 1936 as a prop builder, studio hand and apprentice to famed fashion photographers Horst P. Horst and Cecil Beaton. That same year, Rawlings' first photograph appeared in the September issue of Vogue. In 1937, Condé Nast offered him a job at British Vogue where he worked until the early forties. During his time there, Rawlings experimented with his style and began to develop his signature uses of light, setting and posing. His British Vogue work was so impressive it began cirulating in French and American Vogue as well. (Click on any image to view it larger).

During his career, Rawlings shot over 200 covers for Vogue and Glamour.

Rawlings is credited as the first fashion photographer to associate fashion with Hollywood celebrities. Pictured below: Rawling's portrait of jazz singer Lena Horne published in Vogue, April, 1944; Portrait of Veronica Lake intended for Vogue but never published; Portrait of Vivien Leigh in a magenta Victor Stiebel gown with turquoise tulle, 1936

Rawlings is also said to have single-handedly elevated commercial photography to an art form. Pictured below: a shot of a Jantzen Swimsuit from Glamour Magazine June 1946; an Ad for Haines hosiery, 1964; a shot of Footlights Ballet Slippers from Vogue March, 1944

The below outfit is based on Rawling's famous photograph titled, Little Red Dress from the January 1948 issue of Vogue Magazine.

Anonymous said…
Thanks for posting this story on my great uncle John! He really was a visionary and I'm proud to be part of his creative legacy!
July 16, 2011 at 8:06 AM

Anonymous said…
i was his unofficial appentice i am so pleased that after all these years after his death he is finaly getting the recognation he so justly deservies.
October 5, 2016 at 9:35 AM