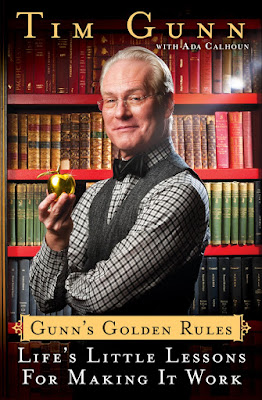 Book: Gunn's Golden Rules: Life's Little Lessons for Making It Work by Tim Gunn. Published in 2010 by Gallery. $13.01 at Amazon.com

Pros: It's written by Tim Gunn, and, really, no further pros are needed. From the time he opens with rule #1: "Make it Work" to the end, when he closes with the final rule: "Carry On," Tim charms us with his delightful manner, straightforward advice, funny fashion world anecdotes and insights from lessons he's learned in life.

Tim's stories about his adventures and run-ins with major fashion and lifestyle powerhouses make the book a bit of a guilty pleasure. He tells all about his near legal battle with Vogue Editor, Anna Wintour (a battle he won with class), his search for a hot dog with Diane von Furstenburg, and an incident with Martha Stewart over a can of diet Coke. Tim doesn't hesitate to use the bad behavior of powerful people to teach others to behave better

Our favorite fashion mentor also opens up about his life and childhood (with a colorful family), how he found his success (being nice, following passions and taking risks), and what really goes on behind the scenes on Project Runway.

Tim Gunn comes across as genuine, kind, caring and very wise. He doesn't hesitate to tell the truth, but he fights the fashion world expectation to be bitchy and self-involved. Overall, the book is a quick, fun and even encouraging read.

Cons: It's hard to find a con here. I can only think that some might be disappointed by the lack of fashion advice. While Tim can't help but offer useful fashion tips to go along with this lifestyle guide, that isn't really his focus here. Others may be disappointed if they read all the press about his fights with major fashion figures since they really weren't major fights, and he didn't indulge the drama. The book really is a guide to making life work whether it's navigating high society or dressing to shop at the grocery store.

Favorite Tidbits:
Tim and and a very hungry Diane von Furstenburg go on a quest for a hot dog, which lands them in a little dive. DVF seems unfamiliar with diner protocol and announces, without even waiting to be greeted or seated, that she wants a hot dog and could someone just bring her one now.

Tim was so nervous his first day of teaching that he actually lost his breakfast in the parking lot and had to brace himself against the chalkboard during class to keep from trembling and falling over.

Tim was an unpaid consultant for the first two season of Project Runway. He also hadn't planned on being on camera. It all paid off in the end.

Tim finds it impossible that his students at Parsons lacked inspiration. He goes on to list films, music and, of course, the amazing city of New York on a list of amazing ways to never stop being inspired. His favorite fashion films include Funny Face and The Devil Wears Prada.

As a child, he met Vivian Vance (who played Ethel on I Love Lucy), but it may have actually been J. Edgar Hoover in drag.
books Project Runway reviews