By becca - January 18, 2011
Last week, Jael Paris dressed several Globes nominees with interesting, fashion forward looks. Now that we've seen what they actual wore, we want to know which you like better--their looks or our picks? Vote below, and do forget to tell us your thoughts in the comments.

Helena Bonham Carter never blends in, and this year's Golden Globes was no exception. Carter wore a Vivian Westwood frock that captured her personal brand of crazy and paired it with two different color shoes. We liked that she stayed true to her quirks. While we would have loved to see her wear our pick since it would have landed her in better standing on the high fashion best dresses lists, we can't fault this women for being so thoroughly herself. 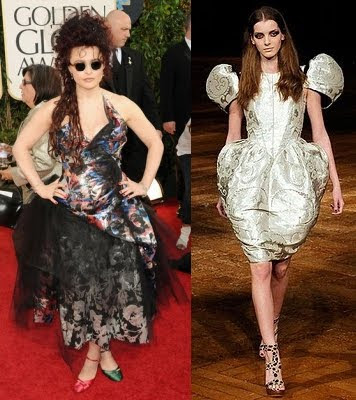 poll by twiigs.com
For her first big appearance on the red carpet since her teen star days, Jael and I both hoped Julia Stiles would show us she isn't that girl from our high school movies anymore. But she disappointed. The dress is fine, I guess. I haven't seen it on any worst dressed lists, but that's because I haven't seen it on any lists at all. I probably wouldn't have noticed her if Jael hadn't chosen to dress her. She seems capable of so much more. 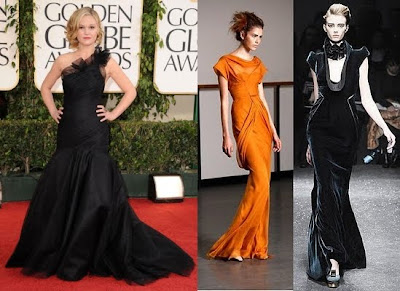 poll by twiigs.com
Elisabeth Moss showed up in the color of the evening with her emerald green dress. The top is interesting and fun, but Jael and I both agreed that something is amiss from the waist down. I surmise this is because the dress was made for a taller women and merely hemmed rather than reworked to suit her proportions. Regardless, I applaud her for doing something bold, even if it wasn't quite as bold as our pick. 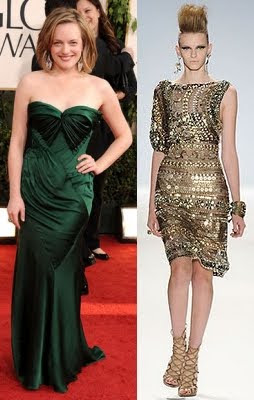 poll by twiigs.com
Jael and I chatted a bit about the dresses, and this was part of the chat about Nicole Kidman:

I had mentioned Kidman's lack of interest at the beginning of our conversation, and less than an hour later I forgot anyone named Nicole was in attendance. In fact, we used forget twice in that brief bit of conversation. I think this is a clear sign Kidman should read our blog and take our advice, or that she should be the style star we know she is capable of being. poll by twiigs.com
Angelina Jolie has proven to the world that she know the secret formula for landing on best dressed lists: black + Grecian = Best (or at least not worst) Dressed. She must have realized we were on to her, because she switched it up. She wore a color! And she wore sparkles! Sadly, the matronly cut makes me think Golden Girls more that Golden Globes, and Anne Hathaway did a similar look much better. Baby steps I guess. We didn't expect this much from her so we stayed conservative with our picks. Which look do you prefer? 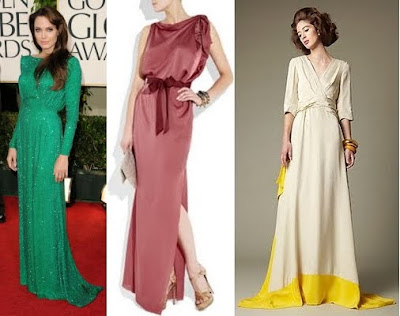