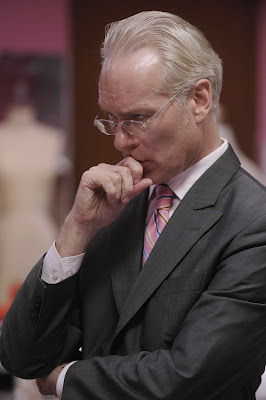 This season of Project Runway has been strange. The judges have been making decisions that leave us and our beloved Tim Gunn bewildered. And while the challenges have been better ideas than the past, they aren't very well defined. Often it seems like the judges are using a different standard than the one given to the contestants.

We viewers aren't alone in our frustration. Tim Gunn has been vlogging on his Facebook page (or was) that he's frustrated with how this season is being handled. For the first eight episodes, he detailed his thoughts on the contestants, judges and producers. He was just as shocked as we were that McKell was sent home early. He didn't understand the Jackie O challenge either. He even interrupted the judges once this season to tell them that they were actually judging based on standards not told to the designers.

I'm sure any reality TV show is filled with it's snafus and switches, but Tim's been going Project Runway for a long time now. If he's this angry, then something is up.

After Tim posted a video about the Jackie Kennedy challenge, he quickly took it down. As far as I can tell is it now completely removed from the internet. He reported doing this of his own accord. However, this has been the end of the videos. I hope the producers aren't trying to silence our beloved Tim Gunn. He says he does his own censoring, but I know the producers can't be happy about what he's say. (He's even made several big fashion names, including Anna Wintour, mad). The rest of the videos are an interesting watch with plenty of insight into the crazy editing and what the cast is really like. Check them out.

I love how outspoken Tim is. His honesty is what makes his opinion so valuable. And he is what makes Project Runway so addicting. Do you think he's speaking out too much? Or do we need more people in fashion like him? Also, do the videos on Facebook make you think any differently about this current season?

EDIT: Since I posted this earlier, Tim Gunn has posted a return vlog on his Facebook assuring us that the producers are not silencing him.
TV + Film